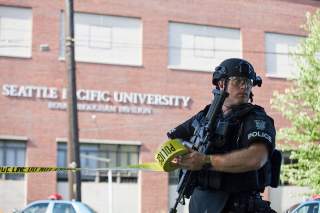 Are Al Qaeda and the Islamic State making a ferocious comeback? If you happened to read excerpts of the most recent United Nations report on both terrorist groups this week (as reported by the Associated Press last week), you could be forgiven for thinking so. Indeed, with tens of thousands of terrorists spread out over South Asia, the Middle East, and Africa, it would be understandable if counterterrorism officials in the U.S. government were assuming that another terrorist attack on the U.S. homeland or against Americans overseas was an inevitability.

Basking oneself in fear, however, is like expending useless energy. In the end, it doesn’t do us much good.

While nobody likes to read about twenty thousand to thirty thousand ISIS members bunkering down in Iraq and Syria or Al Qaeda exploiting proxy conflicts in the region to deepen their foothold, nobody should lose sleep about it either. Terrorism is no doubt a serious national-security problem for the United States—just as it is to many nations around the world—and to regard it as a blip on America’s large radar would be a mistake. Yet for policymakers, it’s also important to keep the threat in perspective in order to minimize decisions that in the end may only provide terrorists like Abu Bakr al-Baghdadi and Ayman al-Zawahiri with more opportunity to recruit, enrich themselves, and propagandize.

We have seen the statistics for years; an American is more likely to die drowning in a bathtub than being killed in a suicide bombing. The defensive measures the United States has taken since the 9/11 attacks, from the top of the Department of Homeland Security to your local sheriff's office, is a big reason why the ratio is so low. The fact that only one hundred people on American soil have been killed in acts of terrorism over the last sixteen years (nearly half of which resulted from a lone-wolf 2016 mass shooting at a Florida nightclub) is a feat of enormous success for America’s intelligence and law enforcement community. A death toll of one hundred, of course, is still far higher than the ideal of zero. But the figure is certainly much lower than the bandwidth terrorism generates in the mainstream media. When comparing the figure to the number of Americans who were robbed in 2016 (332,198 according to the FBI’s most recent crime report) or the over seventy thousand Americans who died from a drug overdose last year, terrorism should be categorized as a high-impact, low-probability irritant to Americans.

But the statistics only tell a part of the story. While Washington can appropriate tens of billions of dollars a year to the intelligence community’s counterterrorism budget and provide billions more in grants to local police departments and border control officers across the country (Brown University’s Cost Of War Project estimates that $783 billion have been appropriated for homeland security between fiscal years 2001–2016), the sad reality is that terrorism will always be with us. Despite U.S. officials pledging the total and complete annihilation of terrorist groups like the Islamic State, these bold declarations are largely political statements for the purposes of public consumption. While individual terrorist groups may disband or be rendered operationally obsolete over time, it’s physically impossible to eliminate terrorism as a whole. Defeating terrorism is about as likely as stopping every ounce of heroin at the U.S. border or preventing every single murder.

Slaughtering innocents to make a political, ideological, or theological point has been a part of world history ever since man walked this earth. Think of the Barbary Pirates in the nineteenth century and the soldiers of the Roman Empire in the second or the horrific religious wars that inflicted Europe. Think of the Black September movement that killed eleven Israeli athletes during the 1972 Olympic Games or the series of airline hijackings in the 1970s and 1980s. What too many seem to forget is just how old terrorism is. Whether we would like to admit it or not, terrorism will be with us as long as some disenfranchised or messianic group in some part of the world believes it’s a valuable way to extract concessions or instill fear in an adversary.

This, of course, doesn’t mean U.S. national-security professionals responsible for keeping Americans safe should throw up their hands and scream at the rafters. The United States should and indeed does put in place programs designed to limit the extent, impact, and frequency of terrorism. And it should certainly continue doing so.

What it does mean, however, is that terrorism in many ways doesn’t live up to the hype. On the list of threats that are existential to the United States, Al Qaeda and ISIS don’t even make the cut. The Islamic State may have the capacity to adapt, decentralize or hide in the desert to fight another day. And in some cases, terrorists can pull off an mass-casualty attack against defenseless civilians as they has in New York, London, Berlin, Bali, Baghdad, Kabul and Quetta.

What terrorist ground can’t do is bring America or its allies to its knees. What has brought more trouble to the United States is not terrorism per se, but the mistakes Washington has often made to combat it—some of which, like the invasion of Iraq and the 2011 operation in Libya, have opened up new ground for terrorists to exploit.