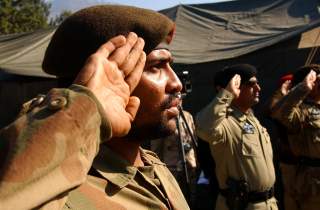 Trump administration is on the cusp of making three crucial decisions about the sixteen-year war in Afghanistan and the related matter of how to manage the tempestuous relationship with Pakistan, thought by many to hold the key to peace in Afghanistan. These decisions will go far in determining whether America can successfully conclude its military adventure in Afghanistan and lay the groundwork for a more stable and peaceful South Asia.

The administration will unveil its new strategy for Afghanistan within days. In a separate but closely related matter, Washington must decide whether it can continue to partner with Pakistan, Afghanistan’s neighbor to the east, or whether it should more openly confront nuclear-armed Pakistan for its long-running support for the Taliban and other allied groups, such as the Haqqani network.

Finally, the State Department must decide whether to keep the stand-alone Office of the Special Representative for Afghanistan and Pakistan, which it inherited from the Obama administration, or fold it into the normal bureaucratic structure of the department. This is not simply a routine organizational shake-up. The outcome will heavily influence how the administration thinks about the related Afghanistan and Pakistan crises.

By virtually any reckoning, Pakistan offers the key challenge. It will soon have the fifth-largest population in the world. It fields the world’s sixth-largest army. In a decade or less, it may surpass China and France and possess the world’s third-largest nuclear arsenal. The country’s geographic location, its standing in the Muslim world, and its ties to major countries, such as China, Iran and Saudi Arabia, give it substantial diplomatic and strategic heft.

As central as Afghanistan has been to the American experience since 9/11, the decisions on Pakistan will ultimately be of far greater importance in shaping the policies and legacy of the Trump administration.

The United States and Pakistan have had a tumultuous relationship for more than fifty years. At the height of the Cold War, again during the Soviet war in Afghanistan in the 1980s, and more recently after 9/11, the two have been close strategic partners. But each of these periods of collaboration has degenerated into a cycle of unmet expectations, angry recriminations, and accusations of betrayal—and, from the U.S. side, sanctions.

Washington is rife with opposing prescriptions for managing the Pakistan relationship. Many, including prominent lawmakers, call for a tougher U.S. approach toward Islamabad. In recent years, Congress has imposed counterterrorism conditions on U.S. military payments to Pakistan that Islamabad has been unable (or unwilling) to meet. U.S. economic assistance is less than a quarter of what it was a few years ago.

Others argue that unless Pakistan can be induced to bring the Taliban to the bargaining table, there is no chance for peace in Afghanistan. Washington, so this line of reasoning goes, should work with Pakistan rather than harangue it. This means, among other things, giving greater weight to Pakistani strategic anxieties—especially about its large neighbor and long-time adversary India—as the United States fashions its policy.

As it considers how to manage its Pakistan portfolio, the Trump team cannot afford to ignore the tortured history of U.S.-Pakistan relations. A careful review of that history would lead to the following conclusions:

Washington should not overestimate the value of its favor or the attraction of its carrots.

Over the years, Americans have marveled at how little their support—including what they viewed as generous financial aid—has gained them in Pakistan. U.S. administrations going back to the 1950s have assumed, without sufficient reflection or analysis, that Washington’s favor would give the United States considerable clout in and political leverage over Pakistan.

Yet, relative to Pakistan’s need and its own commitment of resources, U.S. economic and development assistance has been modest. True, Islamabad has valued U.S. aid and other support, but only if the cost was not too high. When the price for American backing was deemed too steep, as when Washington demanded that Pakistan abandon the nuclear program it believed essential for protection from India, Islamabad did not hesitate to forego U.S. aid.

Similarly, the recent congressional actions to condition U.S. military payments to Pakistan have not persuaded Islamabad to move against the Haqqanis, a step thought contrary to Pakistan’s need to retain influence in Afghanistan. As Gen. David Petraeus remarked a few years ago, “You get what you pay for. We have not paid much for much of anything in Pakistan.”

U.S. power over the years has frequently failed to provide the leverage Washington expected because Pakistan cared more about an issue than Washington did. This, of course, was the case with Islamabad’s determination to develop nuclear weaponry. Similarly, Pakistani generals have placed a higher value on retaining political power—even under the threat of U.S. sanctions—than the United States gave to its insistence that Pakistan abide by democratic norms and practices.

At key points in the partnership, the stakes were higher for Pakistan than for the United States. The bilateral relationship never raised life-or-death issues for Americans. For many Pakistanis, it did. As a senior Pakistani legislator recently told me, “You have the capacity to kill, we have the willingness to die.” Commitment of that magnitude can negate power and nullify leverage.

Pakistan’s strategic geographic location in a volatile and much-contested part of the globe is a huge asset for Islamabad and, indeed, provides Pakistan with leverage against even the powerful United States.

Because of its location on the map, a cooperative Pakistan holds considerable value for the United States, while a Pakistan at odds with Washington can greatly complicate the pursuit of U.S. objectives. The United States has needed Pakistani ground lines and air space to ferry the immense quantities of materiel used to supply U.S. and NATO troops in landlocked Afghanistan. At periods of crisis in U.S.-Pakistan relations, Islamabad has slowed the transit of these vital supplies, and in 2011–12, shut down the land routes altogether. Squeezing Pakistan is harder when Pakistan is able to squeeze back.

Pakistani leaders—even when Pakistan is run by the generals—cannot afford to ignore public opinion. And unfortunately, the United States has extremely low favorability ratings in Pakistan.

U.S. politicians are not the only ones answerable to domestic opinion. Pakistani leaders must also continually tailor their policies so as to avoid alienating important constituencies, including political allies, business leaders, religious groups, influential media voices, senior military officials and an amorphous public opinion.

Even if Pakistani decisionmakers concur with American desires, they may find it politically impossible to be seen as aligning with Washington. U.S. policymakers should never lose sight of the domestic constraints facing their Pakistani counterparts because of America’s unpopularity in Pakistan.

Threats, bluster and public ultimatums can make for good political theater at home, but not necessarily for good diplomacy. Pakistanis, whatever their political and ideological sympathies, view the United States through a prism of American hectoring and bullying. They believe that Washington fails to appreciate Pakistan’s sacrifices in the battle against extremism, is never satisfied and always demands more of Pakistan than is reasonable, or fair, to expect.

One does not have to accept this Pakistani narrative of a shrill and ungrateful America to show a sensitivity to Pakistani honor and pride. A willingness to listen and an ability to speak respectfully to those with whom one strongly disagrees won’t necessarily produce a more accommodating Pakistan. But a failure to display these qualities will almost certainly lead to a more recalcitrant Pakistan.

One might think that these cautions would be self-evident. Yet, one U.S. administration after another has not adequately taken them into account as it sought to work with Pakistan. The Trump administration may or may not fare any better in fashioning a successful Pakistan policy. But if it chooses to ignore the record of the past, it will almost certainly fail.

Robert M. Hathaway is a Public Policy Fellow at the Woodrow Wilson International Center for Scholars. His study on leverage and the U.S.-Pakistan relationship will appear this fall. The views expressed here are solely those of the author.