America's Pivot to Asia Has Wings 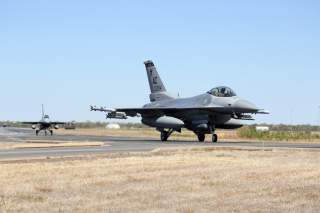 For many of those who follow military and security developments in the Asia-Pacific, America’s much-talked about pivot (or rebalance) is little more than hype with little to show for it from a military perspective. With bloody armed conflicts bubbling in Syria, Iraq, Libya and eastern Ukraine, the Asia-Pacific looks to be an oasis of peace by comparison.

However, China’s rapid economic and military rise over the past decade, coupled with its increasingly assertive and sometimes belligerent behavior in its territorial disputes in the East and South China Sea, has made America’s friends and allies in the region increasingly nervous. Throw in regular bouts of erratic behavior from nuclear-armed North Korea and suddenly East Asia no longer looks as tranquil as first appearances may seem. A feeling that the United States, long seen as a guarantor of peace and stability in Asia by many countries, had seemed distracted or disengaged with the region, mainly as a result of its military entanglements in Iraq and Afghanistan in the early part of this century, only fuelled a feeling of dismay.

So it was with an almost-palpable sigh of relief when, during a 2011 visit to Australia, President Barack Obama announced that the United States would be expanding and intensifying its diplomatic, economic and military engagement in the Asia-Pacific. While much more than purely military effort, it is this aspect of the pivot, or rebalance, that has come into focus, given the underlying tensions in the region. Since then, continuing fiscal problems at home, coupled with conflicts rumbling on in the Middle East, have seemingly conspired to prevent the pivot from taking shape to any significant degree, once again raising questions about the commitment of the United States to the region.

Unsurprisingly, the U.S. Air Force (USAF), with its decades of experience operating aircraft in the Asia-Pacific, has been at the forefront of articulating its vision for the pivot. Centered on a philosophy of “places not bases,” the USAF envisages that instead of adding to its permanent presence in the region, there will instead be an increase in deployments of its aircraft to the Pacific in the coming years, building relationships with regional militaries such as that of Australia, Malaysia, Singapore and Thailand. And although hardly anyone noticed, the USAF might just have set those wheels in motion recently.

In June 2014, twelve Lockheed-Martin F-16C/D Block 30 Fighting Falcon multirole fighters, six each from the Air National Guard units from the District of Columbia and New Jersey, left their respective bases at Andrews Air Force Base and Atlantic City Air National Guard Base and flew across the Pacific to Kunsan Air Base, Republic of Korea where they joined up with the two USAF F-16 squadrons from the 8th Fighter Wing (FW) based there. Crewed by members of the New Jersey Air National Guard (NJ ANG), the F-16s deployed to the Korean Peninsula as part of a Theater Security Package (TSP). While deployed to Kunsan, the ANG F-16s, like all TSP units, became part of the 8th FW. The Wolf Pack is one of two USAF fighter wings permanently stationed in South Korea under Pacific Air Forces (PACAF), with the other one being the Osan-based 51st FW with one squadron each of F-16s and A-10s.

The TSP is a U.S. Pacific Command (PACOM) initiative that brings additional fighter squadrons and personnel that bolster U.S. forces in PACOM’s area of operations on a rotating basis. Typically lasting between four to six months, TSP deployments started in March 2004 and “signify a continued commitment to regional stability and security, while allowing units to train in the Pacific theater” in the words of PACOM.

Unlike previous TSP deployments to Korea, however, this one soon came with a major twist. At the end of July, the NJ ANG personnel departed Korea and were replaced by 185 pilots and support crew from the 121st Fighter Wing, DC ANG. Instead of staying on the Korean Peninsula, the jets undertook a long journey to the south and arrived at Royal Australian Air Force (RAAF) Base Tindal to take part in Exercise Pitch Black 2014. The eight-and-a-half hour, 3,500-mile journey was made nonstop, supported by USAF tankers who refueled the F-16s in midair several times throughout the journey.

Held between August 1 and August 22, Exercise Pitch Black is the RAAF’s premier multinational air-combat exercise, and is held once every two years over northern Australia. This year’s exercise comprised of up to 110 aircraft and approximately 2,300 personnel, and participants also included hosts Australia, Singapore, Thailand, the United Arab Emirates, France and New Zealand. Named after the moonless nights in Australia’s sparsely populated Northern Territory where the exercise takes place, Pitch Black is a Large Force Employment (LFE) air-combat exercise that encompasses a full spectrum of scenarios that make up modern air warfare, allowing participating air forces to use the opportunity to provide realistic, high-end air-combat training for their air crew.

Split into Blue Air (the Good Guys), whose role was to undertake Offensive Counter Air (OCA) missions, and Red Air acting as the “Bad Guys” in a Defensive Counter Air (DCA) role, the exercise saw Blue Air forming strike packages attacking targets inside the exercise area, while Red Force acted as a fictional enemy defending the targets. The main draw of the Northern Territory for such an exercise is the vast expanses of airspace with few flying restrictions, excellent flying weather and the world-class facilities that make up the Delamere Air Weapons Range and Bradshaw Field Training Area.

For the exercise, the ANG F-16s had the opportunity to play both Blue and Red Air on different occasions. When tasked to fly with Blue Air, the F-16s flew a variety of missions, including close air support, strike, escorting strikers and fighter sweeps. According to DC ANG Commanding Officer Lieutenant-Colonel Scott Arbogast, no live or training munitions were deployed; however the ANG F-16s simulated both GBU-12 laser-guided bombs and GBU-38 satellite-guided Joint Direct Attack Munitions (JDAMs) at the exercise. When playing Red Air, some of the ANG F-16s carried the AN/ALQ-188 Electronic Attack Training Pod, a specialized pod used to simulate enemy-threat electronic countermeasures. The pod is seldom seen on the USAF’s regular F-16s, being more frequently employed on the aircraft belonging to the USAF’s specialist Aggressor Squadrons.

2014 marks the first time since 1996 that USAF F-16s have taken part in a Pitch Black exercise, and LTC Arbogast added the squadron took the opportunity to upgrade several of the unit’s pilots to Mission Commander status. The ANG pilots relished the chance to work alongside different aircraft and pilots from various countries, and although they were flying the older Block 30 variant of the F-16, the aircraft have undergone several upgrades, including advanced targeting pods, helmet-mounted cueing systems and updated mission software, and are by no means obsolete.

The DC ANG’s sojourn Down Under did not end with the end of Exercise Pitch Black. As most of the participants wrapped up their involvement in Australia, the DC ANG stayed on to participate in a Dissimilar Air Combat Training Exercise with RAAF F/A-18 Hornets and the Republic of Singapore Air Force’s F-15s and F-16s, which had also concluded its participation in Pitch Black. This was part of the Commando Sling/Tri-Sling series of exercises, which have been held in Singapore since its inception in 1991 and currently take place three times a year. This was the first occasion a Commando Sling/Tri-Sling has been held outside of Singapore.

The DC ANG crew and their aircraft will make their way back to the Continental United States via a stopover in Guam or Hawaii soon after the “Sling” ended on September 12. In many ways, this has been a groundbreaking deployment for the USAF, and underlines the commitment the United States has in the region, be it maintaining security in the Korean Peninsula or to build capability of close allies and partners such as Australia, Singapore and Thailand. This deployment would certainly point the way forward for similar deployments in the future as the USAF looks to build on its end of the pivot.

Mike Yeo is a freelance aerospace/defense journalist/photographer from Singapore based in Melbourne Australia with a focus on Asian Air Power. He runs Base Leg Aviation News and Photography, and his work has appeared in IHS Jane’s, Air Forces Monthly, Combat Aircraft, International Maritime and Port Security and The Diplomat.