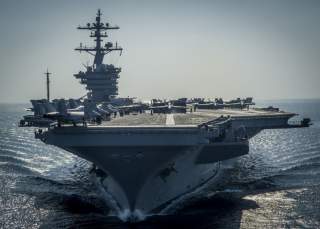 The Obama administration’s “rebalance” to the Pacific is manifestly failing to prevent Chinese expansionism.  The reason is that China’s rapid military buildup is shifting the regional balance of power in their direction.  Until the United States and its partners reinforce their own position in the region, China will continue its coercive tactics in the East and South China Seas, increasing the risk of armed conflict, and undermining both the rights of neighboring countries and the vital interests of the United States.

The entire world has now heard of China’s actions across seven islets and reefs in the South China Sea and its ongoing conversion of those features into military installations.  But that is just the latest in a series of aggressive Chinese actions over the last several years.

In 2012, Chinese forces blocked off the Scarborough Shoal, eventually taking control of it from the Philippines. They are trying the same tactic now with the Second Thomas Shoal. Last summer China stationed an oil rig in waters also claimed by Vietnam.  The Chinese are flooding the Senkaku Islands, which Japan administers, with paramilitary vessels, supported by China’s naval presence just over the horizon. They have declared an “Air Defense Identification Zone” over much of the East China Sea and likely will do the same soon in the South China Sea.

All of these are hostile acts, and the Chinese consistently accompany them with uncompromising rhetoric:  loud claims of absolute sovereignty, repudiation of negotiated solutions, and threats against other countries which fly aircraft or sail vessels within international waters or airspace that the Chinese claim as their own.

Looming in the background is the vast military which China has built over the last twenty years.  China has nearly 300 vessels in its increasingly modern Navy, several thousand fighter aircraft, updated intelligence and reconnaissance systems, growing anti-satellite capabilities, highly sophisticated and lethal cyber capability, and an enormous and growing inventory of increasingly longer-range anti-ship cruise and ballistic missiles.  Virtually all of this power can be concentrated on targets in the East and South China Seas.

Twenty years ago the PLA Navy could put to sea little more than a coastal defense fleet.  But since then China has been increasing its defense spending by double digits every year, incorporating the most sophisticated technology, much of it stolen from the United States, into its ships. They are now in serial production of entire classes of modern corvettes, frigates and destroyers, all heavily armed with anti-ship cruise missiles.  Given their vast shipbuilding base, they could increase production quickly whenever they want.

There is nothing subtle about all this and no sign whatsoever that it will stop.  And from the point of view of the leaders of the Chinese Communist Party, why should it stop?  Why should they stop their military buildup, when it is empowering them in their goals?  Why should they negotiate their claims when they can, over time,  get all of what they want by presenting  their neighbors and the United States with the options of either accepting their position de facto or precipitating conflict with a locally dominant military power?

The United States is, belatedly, working to improve bilateral and multilateral ties with regional allies.  This is welcome news.  The military capabilities that each nation brings to the relationship are important--and all must be improved--but all are inadequate unless strongly supported by the United States.  It is America’s military presence and firepower, as well as American leadership, that provides unity and deterrence across this vast region.

As of now, the military component to the rebalance amounts to shifting 2,500 Marines to the region while increasing America’s naval presence by three ships per year, to a total of 67 ships by the end of the decade.  That response is so modest that, even if it is achievable, it is more a sign of weakness than strength.  And it may well not be achievable, given what the budget sequester is doing to the armed forces.

America cannot shift forces it does not have.  If the Defense budget is constrained to sequester levels, the size of the Navy will almost surely shrink from the current 272 to around 250.  At those levels it will be impossible to increase naval presence in the Western Pacific at all.  To be sure, depending on developments in the Middle East, the Navy might be able to deploy a greater percentage of its vessels to the region.  But a larger percentage of a smaller Navy does not mean more deterrence.  The Chinese can count ships as well as we can.

We’re not saying that the Chinese Navy is ten feet tall.  America still has areas of relative advantage, for example in the quality and professionalism of its sailors and in the undersea domain, where America’s Virginia-class submarine is still the dominant platform.  But China’s leaders are well aware of their vulnerabilities and are working hard to reduce them.  They are acting with purpose and building their strength.

For years, the authors of this piece have been warning about the decline of American power and its consequences.  Those consequences are now manifesting themselves in the Western Pacific.  It is a confession of the bankruptcy of our defense policies that the Navy has become so small that it takes years to provide adequate resources to meet our needs in the Asia-Pacific.

Unfortunately, navies are not built, or rebuilt, overnight.  Reversing the existing trends will not be easy, quick, or cheap, but the risks in the Western Pacific will continue to grow until we do.  We might as well start now.

Representative J. Randy Forbes is Chairman of the Seapower and Projection Forces Subcommittee in the House Armed Services Committee.

American Enterprise Institute (AEI) senior fellow Jim Talent is the director of the National Security Project 2020 at AEI’s Marilyn Ware Center for Security Studies. A former U.S. Senator from Missouri, he was a member of the Senate Armed Services Committee and the chairman of the Subcommittee on Seapower.