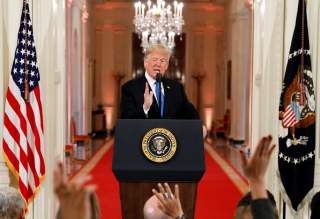 Was it a blue wave, a blue trickle or a simple and fairly normal midterm correction? These are the questions that seem to fascinate and dominate the post-game analysis of the November 6, 2018 elections. With colleagues who are far better equipped than myself to answer these questions, I will not venture deeply into this debate—except to note that, as a 24-year veteran of Brookings and a 30-year veteran of Washington, I have seen enough previous “waves” and other electoral phenomena of seemingly seismic proportions (1992, 1994, 2006, 2008, 2010, 2016) to think that none of them tend to last very long. The modern American electorate is fickle and malleable, in addition to being severely divided.

But most of all, I believe that much of today’s America, especially its working and middle classes, is angry and unhappy. These realities have enormous implications for not only our future politics, but for America’s role in the world and thus, given the irreplaceable role of the United States in undergirding international security, the entire stability of the global order. And of one thing I am sure, in regard to the recent midterms: though a few issues of economic importance like health care did play in the campaigns, what we got was nothing close to what we need as a nation in this realm, if those of us who believe in internationalism and U.S. leadership (Democrat or Republican) are to persuade the majority of American voters to continue to support the kind of U.S. foreign policy engagement that has typified recent decades.

Far more surprising, and concerning, to me than anything happening this November was the campaign and election of 2016. It is not just that Donald Trump won the presidency. It is, rather, that he and Bernie Sanders—two mavericks, two outliers, albeit of much different outlook and personality from each other—dominated that year’s politics. Lions of American politics, and rising superstars with huge talent, including not just Hillary Clinton and Jeb Bush but the likes of Marco Rubio and Scott Walker and John Kasich, were seriously challenged and/or defeated by angry populists with radical messages. In Mr. Trump’s case in particular—since he was the more extreme maverick, and since he won the big prize—he promised not only a makeover in terms of domestic policy, but a U.S. foreign policy that harkened back to the 1920s in its penchant for isolationism.

It is important to drive this basic point home, because while it may sound like an anti-Trump rant, that is not my goal or purpose here. Rather, I am trying to get to the bottom of the politics—and of what this means for future American foreign policy, if we stay on the path we are on now. Donald Trump campaigned on a far more revolutionary foreign policy agenda than he has generally sought to implement in office, especially in his disdain for American alliances and willingness to pull back from the world. And he won with that message! Voters were more than willing to roll the dice on upending the core edifices of post-World War II international stability—a period of time that, despite its catastrophes, has seen far more great-power peace and far more prosperity than any previous era in human history—largely because, it would seem, they were so angry and frustrated with their own lives and their future prospects, as many have been throughout the entire electoral period I mention above, dating back a generation.

I consider this reality a major threat, not just during the next two years of the Trump presidency, but to our nation’s long-term willingness to play the crucial role it has on the world stage since 1945. And without our playing that role, I fear for the world—in terms of trouble Russia will likely stoke in Europe, in regard to the possibility that North Korea will threaten South Korea with war, in keeping China and Japan from drawing swords against each other, in preventing the Sunni-Shia rivalry in the Middle East from getting even worse and going nuclear.

Debate continues, as it should, over whether this American anger and frustration is driven primarily by economics, culture, fears of immigration and immigrants, a general sense of disorder and lawlessness on the nation’s streets, or other causes. But for public policy practitioners, we should focus first and foremost on what parts of this witches’ brew of American disunity and embitterment we can most realistically address. And I believe, as does Belle Sawhill in her important new book The Forgotten Americans, that the policy agenda should center on economics, good jobs, dignity and the quality of life of the American worker and family.

In short, we need a blueprint for reviving the middle-class dream in America—not just for the good of the middle class, but for the future of American foreign policy and thus the fate of the entire planet. Otherwise, voters in future elections—not only in 2020 but beyond—may gravitate towards candidates promising easy fixes, or bashing ungrateful allies and other nations for supposedly causing all of our problems, or targeting federal budgets for defense and foreign affairs as the cause of all our economic woes. And the next time a populist wins with that message, he or she may actually govern the way that was promised on the campaign trail. We could, in the 2020s, see a return to the 1920s (and thus the risk of what happened in the 1930s, as well). President Trump has governed as promised on some issues, like climate and the environment, the Iran nuclear deal and the Trans-Pacific Partnership trade pact. But he has actually moderated or reversed his views on many subjects relating to America’s alliances and even its trade practices, and he has hired individuals with more traditional foreign policy views like Secretary of Defense Jim Mattis and Secretary of State Mike Pompeo to hold key jobs in the administration. That may not happen next time.

One need not think that the United States is an exceptional nation in the way that phrase is often used, or that we are particularly meritorious as a people, or that we usually get our big foreign policy decisions right to come to believe that America provides many of the crucial underpinnings of global order today. As another outstanding Brookings book of 2018, Bob Kagan’s The Jungle Grows Back, makes clear, the argument is slightly less lofty than that. The world needs a leader to undergird its security and its economic order, lest the jungle of chaos and competition that has characterized so much of world history return. And because of its size, geography, melting-pot character, democracy and constitutional principles, the United States is the only serious candidate for the job at this moment in history. We are a deeply flawed leader. But the alternative is much worse—largely because there is no plausible alternative.

What would a comprehensive agenda for reviving the middle class dream in America look like? Richard Reeves at Brookings and others continue to research this foundational question for the nation’s future. But Sawhill has already developed a substantial chunk of what the agenda should probably include (borrowing, in some cases, on her own previously published ideas and those of others, too, in what amounts to a very good compendium of some of the best proposals out there at present). Some of it sounds very familiar; other parts are newer. For example:

First, a reorientation of American corporate strategy to think of the employee more and the shareholder relatively less. The American corporate mottos of maximizing quarterly earnings and glorifying the obligation to the shareholder above all else are both badly misguided ideas. Profit sharing with employees and other such ideas, as well as a greater sense of corporate loyalty to the worker, deserve serious consideration;

Second, a major push on infrastructure spending, and to drive such investment, creation of a federal fund with a central, technocratic board that would make decisions on where to fund infrastructure as well as R&D initiatives. I think of this as an Investment Fund for American Power, to underscore the links between economic health and military strength over the longer term;

Third, a substantial expansion of the earned income-tax credit, as well as much more generous leave policies of various kinds, to strengthen the low-wage American family. Instead of handouts, the focus should be on making work pay and on making work more feasible for struggling families (especially those with single parents and/or multiple young kids);

Fourth, revamping of education and job retraining, so that it is demand-driven and largely employer-led. We all tend to mouth these words already. But many of the ideas and programs out there today are bad. For example, to qualify for federal Trade Adjustment Assistance, one must document that his or her job was lost due to trade. This is, simply put, ridiculous. Most jobs are lost due to domestic economic dynamism, innovation and automation, not trade. We need to help everyone who loses their job get new skills;