America's Real Foreign Policy Test: Moving Past the Crisis of the Day (And to Asia) 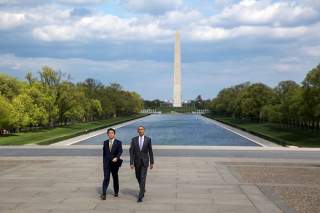 Now that a U.S. Navy guided missile destroyer has sailed within 12 nautical miles of Subi Reef, an artificial Chinese feature within the Spratly Islands, U.S.-China relations and America’s rebalance to the Asia-Pacific region are once again above the fold. The Department of Defense had long been mulling whether to stage freedom-of-navigation maneuvers in response to Chinese land reclamation, and now that it has initiated that challenge—and, predictably, elicited a sharp Chinese rebuke—the U.S. press is expressing renewed concern about the prospect of armed confrontation between the world’s leading power and its principal competitor.

If the past is indicative, however, the press will soon turn its gaze back toward more vivid developments, in the Baltic region and especially in the Middle East. This likelihood, in turn, reveals a paradox that is among the central challenges facing U.S. foreign policy: surveying the three theaters that presently consume most of its bandwidth, there is roughly an inverse relationship between degree of chaos and likely long-term significance—both for the United States and the evolution of world order. This discrepancy pits the imperatives of strategy against the demands of public opinion and social media.

Begin with the Middle East, which is undergoing a cataclysmic reordering. Libya descended into chaos after the overthrow of Muammar Gaddafi, and while UN talks among the country’s warring factions have generated some home for a unity government, the security situation there remains tenuous. Yemen, already the Arab world’s most impoverished country, is being rent by conflict between Houthi rebels and allies of the exiled government. The Islamic State of Iraq and the Levant continues to wreak havoc in Iraq, seemingly undeterred by the loss of legion fighters and the likelihood that its gratuitous brutality will eventually sow its demise. The epicenter of chaos in the MENA region, of course—and the poster child of impotent global governance—is the carnage in Syria. BBC correspondent Kim Ghattas recently observed that “unless we end the war, the country will slowly empty itself—a hemorrhaging of its brightest and best, its young and old, escaping unspeakable horrors in the largest refugee migration since World War II, until all that will be left are the fighters.”

Unfortunately, though, the forceful exhortations for the United States to “act” or “lead” in the Middle East belie how little it—or any other country, for that matter—understands the myriad actors and interactions that are reconstituting the region’s order. A prevalent strain of commentary assumes that its present chaos is principally a function of U.S. vacillation; the logical conclusion, then, is that more forceful U.S. involvement will necessarily mitigate it and advance U.S. national interests. When this sort of presumption becomes reflexive, doing something becomes an imperative unto itself; it need not be thoughtfully connected to an intended outcome, since that outcome is assumed ex ante to be favorable.

Restraint, of course, need not be a euphemism for inaction. The United States should work with regional allies to establish and enforce a no-fly zone in northern Syria, provision far greater humanitarian aid to refugees fleeing Syria, and move swiftly to absorb several times the number it has committed to accepting. It should also support efforts to circumscribe the region’s instability and be attuned to opportunities to nudge actors there in ways that advance U.S. national interests. On balance, though, the United States must be wary of (again) becoming preoccupied with the upheavals of the Middle East, especially when the center of economic development and military modernization lies in the Pacific West. The Middle East, tragically, is far more a source of instability to be managed than of opportunities to be seized.

Moving to Eastern Europe, the on-and-off conflict between Russia and Ukraine has killed over 8,000 and displaced some 1.5 million Ukrainians since mid-2014. While the security situation in the Baltic is orders of magnitude less dire than in the Middle East, it is still distressing, in part because it has punctured the post–Cold War presumption that Europe would no longer be the site of such turbulence. The long-term strategic stakes are also higher than in the Middle East. First, Russia remains a major power: it is the world’s largest country by territory, the largest producer of crude oil and the largest exporter of natural gas. It also possesses the largest arsenal of nuclear weapons and exercises veto power as one of the five permanent members of the UN Security Council. A protracted downturn in U.S.-Russia relations would compromise U.S. national interests in a range of areas, particularly in preventing nuclear proliferation and reducing the threat of nuclear terrorism. And such a downturn could also open an enduring rift between U.S. and European responses to Russian behavior.

All of these realities combine to suggest at least three U.S. imperatives: to cement its alliances in Europe, to constrain the scope of further Russian revanchism and to prevent instability in Europe from developing into a Baltic-wide contagion. Still, it is important to maintain perspective: Russia is a declining power in critical respects. For starters, its demographic outlook is among the poorest of big powers. Moreover, owing to the course it has taken since hiving off Crimea from eastern Ukraine in March 2014, it has compounded its diplomatic isolation from the West, reduced its coercive energy leverage and increased its strategic dependence on China. Its foray into Syria, meanwhile, seems motivated at least as much by a desire to remind the world of its influence as by a desire to contain Syrian instability.

The Asia-Pacific, the last of the three theaters, certainly abounds with risks. The reliably erratic North Korean regime stages periodic nuclear tests to retain its relevance. There is the ever-present possibility of another armed confrontation between India and Pakistan, made all the more concerning by the two countries’ expanding nuclear arsenals. And there is the low but growing prospect of a clash over disputed maritime territories in the South and East China Seas. On balance, though, the region’s drama is nowhere as violent or vivid as that which presently engulfs the Middle East and Eastern Europe. And yet it will be the nerve center of world affairs this century, and perhaps well beyond. It is no accident that so much of the world outside of the region is trying to rebalance to the Asia-Pacific. No matter which economic and military metrics one considers, its centrality is growing apace. And while China’s resurgence is the major part of the story, Japan, South Korea, India, Australia and Indonesia are all critical players in their own right, regionally and globally. And the Indian Ocean and the South China Sea are two of the world’s most vital commercial arteries.

Going forward, then, U.S. foreign policy must not let Middle Eastern chaos or Russian opportunism distort its assessment of trends in world order. The Asia-Pacific’s long-term strategic consequence will continue to grow. More generally, the United States should not reflexively impute strategic importance to dramatic events.

Ali Wyne is a contributing analyst at Wikistrat, a global fellow at the Project for the Study of the 21st Century, and a Master in Public Policy candidate at the Harvard Kennedy School. He is a coauthor of Lee Kuan Yew: The Grand Master’s Insights on China, the United States, and the World (2013).