Is America's "Rebalance" to Asia Dead? 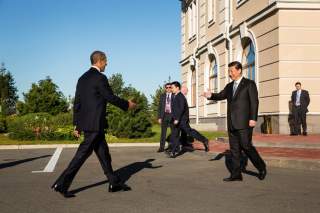 Tom Donilon’s April 20 op-ed, “Obama Is on the Right Course with His Reorientation Toward Asia,” Washington Post, is another example of how defenders of the Obama administration have sought to pivot away from important questions about the rebalance to the Asia-Pacific. Rather than cite concrete evidence of America’s increased commitment to the Asia-Pacific, Donilon offers incomplete arguments and retreats to well-rehearsed explanations of the strategic origins of the rebalance.

To his credit, Donilon recognizes from the outset that there have been questions about the “sustainability” of the rebalance. “The costly cancellation of President Obama’s trip to the region during the U.S. government shutdown last fall fueled that skepticism, which has only grown as urgent foreign policy challenges have required U.S. leadership in the Middle East and Europe,” he writes.

Showing up matters in the Asia-Pacific, and President Obama’s trip to the region this week is indeed long overdue. On this score, Donilon gets it right. But he understates how unfolding events around the world are impacting Asia’s view of the rebalance.

Our regional allies are worried because our leadership has been “required” in the Middle East and Europe. Even after the Afghanistan and Iraq wars, the U.S. presence in the Middle East is not likely to shrink. And in the aftermath of Ukraine, there are calls for a pivot to Europe as more U.S. troops are sent to NATO’s eastern frontiers.

But our allies are also worried because of the perceived failure to demonstrate such leadership. In particular, the handling of the crisis in Syria left security experts and government officials in the Asia-Pacific wondering how much America’s security commitments mean when challenged. Among America’s Asian allies, there was no appetite for American intervention in Syria, particularly military intervention. If America were to become too involved, many feared the rebalance would be over before it began.

Nonetheless, the credibility of the United States was hurt because it appeared that America was going soft on its commitments. President Obama’s red line on chemical weapons in Syria never had the same force as the mutual defense treaty with Japan, for example. But the importance and weight of the president’s public statements on matters of war should never be trivialized. The president set forth the conditions under which the United States would become militarily involved in Syria, and when those conditions presented themselves, he got cold feet. So, too, did many in Congress. Even for countries like Japan and South Korea who didn’t want the United States to become embroiled in Syria in the first place, that is a worrisome precedent.

I believe U.S. government officials are sincere in their desire to uphold U.S. security commitments in Asia. But regardless of their intentions, such commitments are now the subject of increased scrutiny and doubt in the Asia-Pacific. In Japan, for example, public polling indicates that while support for the U.S. alliance remains near all-time highs, growing numbers of Japanese feel they cannot fully trust the United States.

While quick to acknowledge events in the Middle East and Europe may worry allies and partners in Asia, Donilon also seeks to assure allies beyond Asia that the rebalance to the Asia-Pacific should not be a source of concern. The rebalance, he argues, “does not imply a turn away from allies in other regions or an abandonment of our commitments elsewhere.” It has been difficult for U.S. allies in the Middle East and Europe to accept such arguments. After all, the impetus for the rebalance, as Donilon puts it, was the administration’s judgment that “the United States had become substantially underinvested in the Asia-Pacific region—diplomatically, militarily, commercially and in terms of policy makers’ attention.” One would think that increased attention to the Asia-Pacific region in these quarters would have to come from somewhere.

So where is this newfound time and attention for Asia coming from? Donilon tells us the rebalance “represents a shift away from the war efforts in the Middle East and South Asia…” A cursory reading of Donilon’s argument here might lead one to believe that the Asia-Pacific rebalance, rather than a commitment of additional resources to the Asia-Pacific, is merely another way of saying “the wars in Iraq and Afghanistan are over, therefore the relative importance of Asia has increased.”

This would be an oversimplification (or at least I hope so). Donilon and other architects of the rebalance make a reasonable case that drawing down in Iraq and Afghanistan offers a real opportunity for senior policy makers in foreign policy and defense to devote more time to the formulation, implementation, and execution of long-term strategy that simply doesn’t exist in a wartime environment. I hope such an opportunity materializes and is thoroughly exploited.

But strategies are meaningless without resources. If the United States intends to rebalance to the Asia-Pacific without abandoning allies elsewhere in the world, it must devote additional resources to the Asia-Pacific in absolute—not relative—terms. As Joe Biden might say, show me your budget.

Astonishingly, Donilon’s op-ed on the sustainability of the rebalance contains not a single word about the budgetary challenges that pose one of the greatest threats to the rebalance. Defense cuts of up to $1 trillion enacted in the Budget Control Act would put extraordinary pressure on the U.S. military’s ability to provide increased presence and capability in the Asia-Pacific region. The rebalance may be about more than just security. But without the security element, the rebalance won’t mean much.

Donilon’s evidence for America’s “substantial and deepening” commitment to Asia’s security is that 60 percent of the Navy’s assets will be in the Pacific by 2020. The historical norm is roughly 50 percent. Just after the rebalance was announced, the Navy was already at 55 percent.

This 60 percent statistic—widely used across the administration and the Pentagon, not just by Donilon—is no way to measure the rebalance.

First, it’s the worst kind of argument for the rebalance because its percentage terms explicitly suggest a shift away from other important regions of the world—something Donilon says is not happening.

Second, increasing Asia’s share of the U.S. Navy’s global fleet has far less meaning if the global fleet shrinks. Under the best of budget conditions, the rebalance would lead to a small net increase in the number of U.S. ships in the Asia-Pacific. Overall, the Pacific fleet would be more advanced as new ships enter service and older ones are retired. But under sequestration, the Navy’s fleet is set to shrink from roughly 285 ships to as low as 230. Deep budget cuts would put additional pressure on already strapped shipbuilding resources, slowing the development of more advanced vessels suited for the anti-access, area-denial environment in the Asia-Pacific. Sequestration would lead to a smaller, less capable military. And despite the best efforts of Pentagon planners to prioritize, that will be true in the Pacific as well.

Third, the 60 percent statistic exclusively measures the quantity of U.S. forces. It says nothing about the quality of capability they provide relative to our potential opponents. In other words, assigning 60 percent of the global fleet to the Asia-Pacific says little to nothing about U.S. ability to preserve a favorable balance of military power in the region. If the rebalance is meant to reassure allies, we should measure not the geographic distribution of U.S. forces, but our military’s ability to deter would-be adversaries from choosing a path of aggression and coercion.

But the rebalance is about more than military assets, interjects Donilon (At the end of ten years of sequestration, one would hope so). After all, the rebalance is a whole-of- government approach with economic and diplomatic elements.

The centerpiece of the economic rebalancing is the Trans-Pacific Partnership (TPP), a massive free trade agreement that would include the United States and eleven other countries in Asia and Latin America. On this issue, Donilon is compelling:

“By eliminating trade barriers and harmonizing regulations, the TPP would connect a dozen Asia-Pacific economies in a massive trade and investment framework covering 40 percent of global gross domestic product. It would directly provide the United States with some $78 billion in annual income.

The TPP’s most important aims, however, are strategic. A deal would solidify U.S. leadership in Asia and, together with the negotiations over a free trade pact in Europe, put the United States at the center of a great project: writing the rules that will govern the global economy for the next century. An open platform that countries can sign onto provided they commit to its high standards, the TPP would incentivize the spread of free markets and liberal economic principles.”

I could not agree more. That is exactly the kind of big-picture thinking the rebalance is meant to capture and seems sorely lacking in Washington.

But Donilon completely omits the not-so-insignificant fact that TPP is headed nowhere fast. Negotiations held in February in Singapore concluded with no end in sight, leaving many wondering if TPP was headed the way of the Doha round of trade talks now in its thirteenth year. In Congress, Senate Democrats including Majority Leader Harry Reid have fought the “fast-track” trade promotion authority essential to concluding the deal. Without confidence that the United States will stick by the tough political decisions inside such a massive trade deal, other countries are unlikely to take such steps themselves.