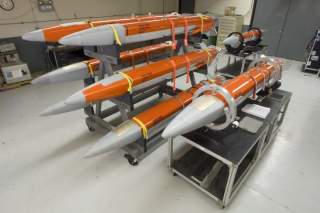 The U.S. military is at a crisis point. We are staring down the barrel of a future where U.S. military technological superiority may no longer be a given where the military strength that has undergirded global security since World War II may be in question. The technologies that have given the U.S. military its edge stealth, long-range sensors, communications networks and precision-guided weapons are proliferating to other actors. As a result, so-called “anti-access” challenges threaten traditional modes of power projection. While individual U.S. ships, planes and tanks remain more capable one-on-one, the pernicious “death spiral” of rising costs and shrinking procurement quantities means that the United States has increasingly fewer and fewer assets to bring to the fight. The U.S. military will have to fight significantly outnumbered, and even the qualitative advantages U.S. assets have will not be sufficient. Quality matters, but numbers matter too. At a certain point, U.S. aircraft and ships will simply run out of missiles.

In the face of this waning military advantage, Secretary Hagel has called for a renewed investment in military technological superiority. Deputy Secretary Bob Work has launched a long-range research and development planning program to identify new, potentially game-changing technologies. As the Department of Defense (DoD) begins to craft a new technology dominance strategy, a key component should be harnessing the advantages of the unfolding robotics revolution to field large numbers of low-cost systems.

Swarms of low-cost robotic systems can overwhelm enemies, saturating their defenses. Cooperatively, they can operate with greater coordination, intelligence and speed on the battlefield than manned systems. Perhaps most significantly, they can help to bend the cost curve downward, allowing the United States to field large quantities of systems that, in aggregate, retain qualitative superiority. Disaggregating complex, multimission systems into larger numbers of lower-cost systems is a potential way to increase resiliency, diversity and impose costs on adversaries—and to do so affordably. But harnessing the advantages of this approach will require a new paradigm for how we build next-generation military systems.

“Imposing Costs” on the Enemy, or on Us?

What DoD leaders are looking for is a technology dominance strategy that “imposes costs” on adversaries. If we put our minds to it, this shouldn’t be hard to do. The current U.S. defense system is excellent at imposing costs on ourselves. We have been steadily pricing ourselves out of the business of defense.

In 1984, Norm Augustine observed as one of “Augustine’s Laws” that the cost of military aircraft was growing exponentially, while the defense budget was only growing linearly. He humorously noted:

In the year 2054, the entire defense budget will purchase just one tactical aircraft. This aircraft will have to be shared by the Air Force and Navy 3½ days each per week except for leap year, when it will be made available to the Marines for the extra day.

We need not wait until 2054 for Augustine’s Law of rising costs to take its toll. The crisis in rising costs and shrinking quantities that he warned about is here today. A 2008 RAND Corporation study that analyzed a U.S.-China air war over Taiwan made the bold assumption that every air-to-air missile fired from a U.S. F-22 hit a Chinese fighter (100 percent kill rate) and that every Chinese missile missed the U.S. F-22s (0 percent kill rate). In their simulation, the United States still lost the fight. The F-22s ran out of missiles and the Chinese fighters were able to go after vulnerable tankers and command and control aircraft. A far more detailed simulation the following year showed the same results. Even though U.S. F-22s were pegged with a 27-to-1 qualitative advantage over Chinese fighters, their diminished numbers and the fact that they had to fight from long range meant the Chinese had vastly superior numbers and won the fight.

These trends in rising costs and shrinking quantities aren’t new. Aircraft costs have been rising exponentially, predictably, since the 1950s. U.S. ship costs rose between 7-10 percent on an annual basis from 1950-2000. The current budget downturn only exacerbates a long-term trend in shrinking quantities. More money might delay the inevitable, but it won’t fix the problem. From 2001 to 2008, the Navy and Air Force base (nonwar) budgets grew 22 percent and 27 percent, respectively, adjusted for inflation. At the same time, the number of combat ships declined by 10 percent and the number of combat aircraft declined by nearly 20 percent. Rising personnel and health-care costs are a part of what is squeezing the force, and must be brought to heel, but even if they are, rising platform costs alone will force an ever-shrinking fleet.

The U.S. defense establishment’s response to this challenge has been to double-down on the current approach. We make our weapon systems increasingly multimission, able to take on more and more roles to accommodate a shrinking force. As a result, requirements go up. Costs go up. Development timelines stretch, allowing more time for the bureaucracy to adjust the requirements. In fact, requirements are almost certain to be adjusted on a twenty-year development timeline: the threat environment will inevitably change. But that drives more cost increases. And procurement quantities are cut further. So the remaining systems need to do even more …

This is like fighting lung cancer by smoking harder. We need to quit.

The Enemy Is Us

The solution is not to stop modernizing or to retain legacy force structure at the expense of higher-quality systems. Instead, we need a new paradigm that allows the United States to field high-quality systems and in large quantities. And this strategy must work in the midst of a constrained fiscal environment. Accommodating rising costs through massive growth in the defense budget in perpetuity is neither feasible, nor responsible. But to kill the disease, we need to identify the root cause.

The line the U.S. defense establishment has told itself is that the rising costs are not our fault, that costs have gone up because it just costs that much to make modern weapons. Complexity, we are told, is behind the cost increases. To build a system as complex as the ones we are building today, it takes decades and costs billions. They have millions of lines of code!

That sounds convincing and contains an element of truth. Detailed studies of root causes behind aircraft and ship cost increases have identified complexity as a major factor. However, it confuses a symptom with the disease. Increasing complexity does not automatically lead to exponential increases in costs.

A modern military aircraft is no more complex, when measured in number of parts and lines of code, than a high-end automobile. The Joint Strike Fighter has 24 million lines of code. A high-end automobile has on the order of 100 million. The Joint Strike Fighter costs more because it is a fighter aircraft, of course. But the key difference is the trends in cost growth. Automobile costs have not risen exponentially as they have become more complex. Instead, they have remained relatively flat in real dollars. Cars are able to harness greater economies of scale, but that doesn’t explain the difference in rates of cost growth.

The key difference is time. Cars are developed on timelines measured in just a few years, while most modern military systems take twenty to thirty years to come to fruition. As a result, cars are built incrementally based on mature technology, holding down risk. New models are not built from scratch, but rather improve on what already exists. The need to go to market on time constrains the pursuit of overly complex or expensive technologies. If an upgrade is not yet ready, or not yet cost-effective, it can be delayed for release in the next year’s model.

Conversely, long development timelines in DoD create a perfect storm of methods for cost increases. Long timelines incentivize gold-plated requirements divorced from an understanding of technology risk. Requirements for next-generation weapons often include capabilities that are not yet technologically feasible, on the assumption that over the ensuing decades, the technology will be created. Sometimes it can be, but sometimes it can’t, or not without exorbitant costs. Lengthy development timelines virtually ensure requirements will shift over time, either because the threat changes or because there is simply more opportunity to tinker with them. In the worst cases, even with shifting requirements, platforms are unable to keep pace with adversary or commercial-sector innovation and risk being obsolete before they are even fielded.

Cost restraint is another difference. Automobile costs are limited by what consumers will buy and by competition, forcing trade-offs between the value additional features add and what they cost. Too often DoD has pursued a whatever-it-costs approach to its next-generation weapon systems, as though a capability is required no matter the price. But no innovation is priceless. Higher costs lead to reduced quantities, and that means less capability for the force as a whole. Senior DoD leaders have undertaken important reforms to constrain costs. They may well be for naught, however, if DoD still finds itself saddled with too-big-to-fail systems and no viable options if costs creep upward. For example, DoD officials have insisted the next-generation bomber will cost only $550 million a copy (in 2010 dollars). But what if it doesn’t? Will it be cancelled, delaying a much-needed capability? How would DoD fill the genuine need for long-range strike without a bomber? What would the alternative be?