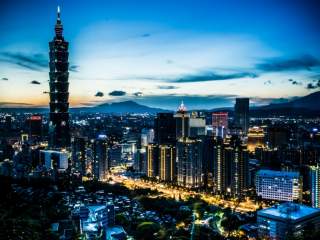 With geopolitical tensions increasing throughout East Asia, the United States has sorely neglected a key strategic partner: Taiwan. Its per capita GDP of roughly $39,000, as measured in purchasing power parity ($21,000 at current exchange rates), makes Taiwan one of the richest countries in Asia. Yet it has been largely left out of the rapid integration that has long characterized the economic policies of the region.

Asia’s economic integration took off last decade as the World Trade Organization (WTO) Doha round of trade negotiations unraveled and free-trade agreements (FTAs) began multiplying. According to the Asian Development Bank, as of September 2014, ratified FTAs involving an Asian country numbered 119, up from thirty-six in 2002. In addition, the ASEAN Economic Community (AEC) hopes to create a single-market economy with free movement of goods, services and investments throughout the ten ASEAN nations by the end of 2015.

Currently, only twenty-two countries recognize Taiwan diplomatically, although 171 recognize mainland China. Taiwan has trade agreements of marginal dollar value with several of these twenty-two countries. Outside of this small circle of what Taiwan calls its “diplomatic allies,” its negotiating partners require tacit approval from the mainland before embarking on talks with Taiwan. As a result, except for recent agreements with Singapore and New Zealand, Taiwan has been a bystander as Asian FTAs proliferated. While Taiwan joined the WTO in January 2002 (shortly after China’s entry), the growing global trade that is now subject to preferential treatment under FTAs is undermining the value of its WTO membership.

Isolated economically, Taiwan will be increasingly harmed by the FTAs’ trade-diversion effect. Its exports will lose out in FTA markets, due to increased competition from imports from other FTA partners. The successful completion by Korea—a competitor with Taiwan across a wide range of products—of FTAs with the European Union and United States provides a useful example of some of the costs to Taiwan of not participating in these Asian FTAs. (In total, Korea has managed to sign eight FTAs covering forty-six countries.)

Where Taiwanese trade and investment has been flourishing, however, has been with the mainland. Bilateral trade with China (including Hong Kong) last year grew to $165 billion. That reflects a compound annual growth rate of over 18 percent since 2000. China is now Taiwan’s largest trading partner, accounting for 40 percent of Taiwan’s exports. Taiwan ran a $77 billion trade surplus with China in 2013. Taiwan outward-bound foreign direct investment is also directed at the mainland, running approximately $14 billion in both 2010 and 2011—approximately 80 percent of total FDI.

The Economic Cooperation Framework Agreement (ECFA) of 2010 signed between the PRC and Taiwan has the potential to open up the vast Chinese market to Taiwan businesses. The economic accord and its constituent agreements are the most significant between the two sides of the strait since the PRC’s founding in 1949, and have helped to ease cross-strait tensions considerably in recent years. Millions of tourists visited Taiwan last year, making tourism one of the island’s largest industries.

Taiwan’s economic integration with the mainland has become a double-edged sword. Perhaps Shen Lyu-Shun, Taiwan’s top representative in Washington, expressed this best in a recent Washington Times interview. “Mainland China is our largest land of opportunities, but they are the largest single, potential source of threat for us.” Echoing earlier statements by Taiwanese president Ma Ying-jeou, Mr. Shen added, “How do we maximize opportunities [and] minimize the threat? That takes a lot of very skillful manipulation…support from this country [i.e.—the United States] will make us more confident as we engage with China.”

How exactly can the United States help Taiwan in this respect?

It should launch formal discussions of a bilateral investment agreement (BIA) with Taiwan as soon as possible. This would be the most effective way to remove nontariff trade and investment barriers between the two countries. More importantly, a BIA would create an impetus for Taiwan to join the Trans Pacific Partnership (TPP). The twelve member nations of the TPP, which currently account for 38 percent of global GDP and 25 percent of world trade, offer Taiwan the opportunity to diversify and rebalance its external economic relations. The United States should assist Taiwan in making the necessary structural adjustments so it can progress toward TPP standards. Of course, TPP’s prospects in Washington depend wholly on the degree to which it truly liberalizes trade, as well it should. But if such an FTA is reached, Taiwan ought to be invited to join.

Contrary to some opinion, Taiwan’s agreements with Singapore and New Zealand, both participants in the TPP talks, prove it is ready and willing to engage in free-trade liberalization and implement domestic economic reforms. Moreover, given Taiwan’s production links throughout Asia, membership in TPP would help accelerate economic integration throughout the region, increasing economic efficiency among all the member economies. It also has the potential to mitigate geopolitical tensions at a time when the United States needs fewer foreign distractions. It sounds like a win-win situation.