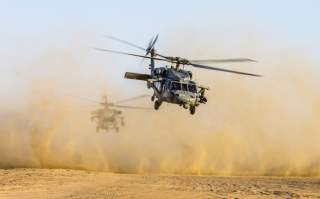 As the international community narrows its focus on Islamic State’s burgeoning sanctuary in war-torn Libya, neighboring Tunisia is caught in a precarious security environment that threatens to unwind its fledgling democratic progress. As the lone success story in the post–Arab Spring era, Tunisia is teetering on a knife’s edge as it balances the demands of a nascent democracy with the growing challenge of domestic and foreign militancy.

In the aftermath of two grisly Islamic State–inspired attacks on civilian targets in March and June 2015, the United States confirmed Tunisia as a Major Non-NATO Ally (MNNA), tripling U.S. security assistance to roughly $100 million in 2016. The MNNA designation also accelerated the amount of defense articles available to the Tunisian military and security forces, while easing review and delivery timelines. With U.S. assistance, Tunisia has installed a 125-mile border wall equipped with electronic surveillance and moat-like trenches designed to create a buffer and deterrence against black-market commerce, militants and traffickers alike. While these efforts rightly target the cross-border networks that facilitate weapons and militants across Tunisia’s borders, the security environment along the border regions is rather opaque and not as amenable to security-centric remedies as commonly assumed.

Illicit cross-border commerce in Tunisia­ is viewed as an alternative source of income for historically marginalized communities in towns such as Ben Gardane, Sidi Bouzid, Gafsa and Gabes­—all located within the country’s marginalized interior. These towns have also supplied the wider majority of foreign fighters recruited into battlefields throughout the region. These towns are riven by low economic prospects, high unemployment, regional economic inequalities and a historically antagonistic relationship with the governing elite. As such, smuggling and other forms of illegal commercial activities serve as the most viable source of meaningful revenue.

Towns such as Ben Gardane, which is located twenty miles from the Libyan border, act as key transit points for all forms of contraband, from black-market oil to weapons and the scores of potential fighters pursuing jihad abroad. For these communities, economic desperation and resentment caused by sluggish governance reforms runs deep. More importantly, this array of sociopolitical grievances combines with the increasing appeal of Salafi jihadist ideals among marginalized youths and drive tens of thousands of Tunisians into the hands of jihadist recruiters. Within such an environment, strict security-focused approaches may lead to the better identification, interception and interdiction of recruiters and potential militants, but these measures are ultimately insufficient. Unless the United States is willing to parlay its security investments and Tunisia’s MNNA status to encourage reciprocal investments in governance, these communities will continue to incubate and groom disenchanted youths into foreign fighters, with adverse effects on Tunisia’s overall security.

The United States rightly concentrates on the most acute sources of Tunisia’s militancy problems: a porous border region with Algeria and the jihadist foothold in Libya. U.S. technical and training support has so far played a pivotal role in supporting Tunisia’s domestic counterterrorism, antismuggling and anti-trafficking capabilities. The provision of high-end weaponry, surveillance and advanced airlift assets may enhance border security, but an effective counterterrorism approach requires responsive security services that are sensitive to local grievances and viewed as legitimate guardians of the local communities.

So far, the Tunisian government’s attention to both factors has been lackluster at best. The police force is viewed as corrupt and repressive and its members implicated in cross-border extortion rackets and excessive use of force. Further, while the military holds a more vaunted reputation, corruption threatens to erode its current prestige. There’s also the possibility that despite Tunisia’s privileged security relationship with the United States, such engagement may cultivate dependency rather than the institutional reforms required to effectively absorb, apply and dispense state resources into effective counterterrorism measures. As seen elsewhere in the Gulf, and perhaps more acutely in Egypt, Tunisia’s MNNA status may not necessarily translate into the security-sector reforms required for long-term stability.

This concern is far from cursory and its impact is visible throughout the region. But despite this unfortunate trend, U.S. investments in military and security assistance under President Obama have never fallen below 73 percent of overall assistance to the region. Conversely, appropriations for democracy and governance programming have maintained a low average of 4.8 percent of overall Middle East and North Africa programming throughout Obama’s presidency. This trend highlights the skewed imbalance between security-sector assistance and the urgent economic and governance reforms required to wean marginalized communities from the path towards militancy.

Unless increments in defense and security-sector spending are matched with corresponding pressure on recipient states to advance security sector and governance reforms, the United States will continue to pour good money after bad in fragile yet important partner states such as Tunisia. Supporting Tunisia’s security sector must focus on more than fast-tracked arms shipments and access to weaponry and/or training. Instead, the United States must condition its aid to measurable improvements in overall force professionalization and governance reforms.

Increasing security assistance without enforcing conditions on accountability, human-rights protections and institutional reform will only drive further repression and distrust. This objective is attainable if the government acts aggressively to dismiss officers and officials implicated in corrupt practices and/or human rights abuses. Shoring up Tunisia’s overall security requires that the government restore its confidence within the public, particularly among marginalized regions and communities.

During the dying days of Al Qaeda’s original insurgency in Iraq, stalwart jihadist Abu Musab al-Zarqawi allegedly lamented that if Tunisia’s coastal town of Ben Gardane had been located next to Fallujah, Al Qaeda’s local affiliate AQI would have liberated Iraq. Zarqawi’s rather sanguine appraisal proved initially inaccurate, though it is difficult to ignore his prescient outlook on the transformation of Tunisia’s most marginalized towns and communities into potent foreign-fighter reservoirs. That roughly six thousand Tunisians from towns such as Ben Gardane contributed to Islamic State’s notorious ascent in the Levant is a cause for sufficient alarm. Both the United States and Tunisia’s domestic leadership must recognize that deficiencies in governance pose the most urgent threat to Tunisia’s inchoate democracy, and respond accordingly.

Peter Kirechu is a researcher in the Middle East Security Program at the Center for a New American Security.