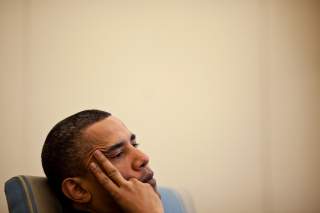 Since October, at least 52,000 children have been taken into custody for entering the United States illegally. Most of them are from Central America and many of them were unaccompanied by adults.

This has created yet another humanitarian crisis on a U.S. southern border that has already seen far too many. It has also raised uncomfortable questions for President Obama, who has tried to balance an image as a reluctant but tough immigration enforcer—his administration touts, and activists decry, what they describe as record deportations—with pleas for leniency toward illegal immigrants.

In Obama’s telling, those pleas have fallen on congressional Republicans’ deaf ears. This goes doubly, he says, for young people who are Americans in every way except “on paper” and whose status could be regularized through common sense reforms those same Republicans stubbornly refuse to enact.

Failing to break their hearts of stone, our president is left with no choice, he tells us, but to fight for these young people, armed only with a pen and a phone. As far back as August 2011, Homeland Security Secretary Janet Napolitano acknowledged in a letter to twenty-two Democratic senators that removing from the country illegal immigrants who had not committed other crimes was not an “enforcement priority” of the Obama administration.

This was dubbed “prosecutorial discretion.” But as time went on, it became clear through public pronouncements and internal DHS memos that a broader administrative amnesty—particularly for younger people who would have benefited from the stalled DREAM Act—was being contemplated.

“In the absence of Comprehensive Immigration Reform, CIS can extend benefits and/or protections to many individuals and groups by issuing new guidance and regulations,” advised a memo to the director of United States Citizen and Immigration Services, uncovered by Pro Publica (which is not exactly a conservative media outlet).

A subsequently leaked DHS memo proposed using “administrative measures to sidestep the current state of Congressional gridlock and inertia” on immigration. One such idea was “a narrowly tailored registration program for individuals eligible for relief under the DREAM Act, AgJOBS, or other specifically designed subcategories.”

“The Secretary would face criticism that she is abdicating her charge to enforce the immigration laws,” the memo’s authors allowed, but they also expressed hope she would “be viewed as breaking through the Washington gridlock in an effort to solve tough problems” at a time when “providing Latino voters with something they can support will be a win-win for us all.”

“Our nation’s immigration laws must be enforced in a firm and sensible manner,” Napolitano would later say publicly. “But they are not designed to be blindly enforced without consideration given to the individual circumstances of each case.”

Obama himself admitted, “I wish I had a magic wand and could make this all happen on my own.” When he denied he had that power in a speech to the National Council of La Raza, the crowd roared back, “Yes you can!” The president later told Univision, “There are times where—until Nancy Pelosi is speaker again—I’d like to work my way around Congress.”

Five months before the 2012 presidential election, Obama announced that he would stop deportations for a half a million people who were brought to the United States as children. For this, he was rewarded with more than 70 percent of the Hispanic vote.

What effect did those words—followed by increasing pressure from allies in the Latino community to halt the deportations and provide administrative relief to illegal immigrants—have on the current border crisis? The administration’s defenders insist the answer is, “Not very much.”

They point to violence in Central America creating a refugee crisis, with the UN Commissioner for Refugees finding that 58 percent of unaccompanied children feel safer traveling to the United States alone than staying home. They also note a 2008 law, passed to curb child trafficking, requires hearings before Central American children can be sent home.

But that law is now nearly six years old and violence in the region, while escalating, is not exactly new. The 99 percent increase in entries by unaccompanied children is something that has happened this fiscal year. Past amnesties—even ones duly enacted by Congress in a bipartisan manner—have coincided with increased rather than decreased illegal immigration. Why assume this talk of administrative relief for the young is any different?

To be sure, much of the debate surrounding this question has generated more heat than light. There has been loose talk of impeachment. Conservative talk-show host Glenn Beck, a private citizen, has been absurdly accused of amnesty for sending meals, soccer balls and teddy bears to the displaced children (though an argument could be made for performing these acts of charity with less showmanship).

But by not thinking through the incentives the current immigration mess creates—or at least not thinking about more than domestic political considerations—we now have two crises on our hands. The first involves the children. The second is a crisis of legitimacy as we have ceded our immigration policy to conditions abroad beyond our control.