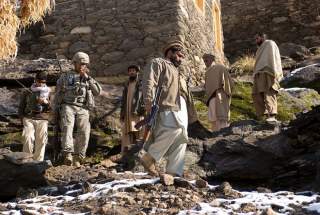 In 1815, Mountstuart Elphinstone, the first British ambassador dispatched to the court of the Afghan shah in 1809, published an abridged version of his eighty-eight volumes of notes from the mission. The result was the two-volume An Account of the Kingdom of Caubul. Two hundred years later, foreign understandings of the modern Afghan state and its inhabitants have been largely molded by this book. Western policy has largely failed the Afghans and the international community because its current (mis)understandings of Afghanistan remain uncritically and often unconsciously shaped by this vision from the past.

Taking a cue from the twenty-eight volume of the Encyclopédie of the French Enlightenment—a project envisaged to include everything known and knowable about the natural and human world—Elphinstone produced his own encyclopedia about Afghanistan and its people. In doing so, he delimited the bounds of knowledge about the country. Having read Tacitus’s account of the Germanic tribes during his travels to the Afghan court, Elphinstone painted a picture of a society organized by a strict tribal structure where genealogy provided a social roadmap, as well as a mark of belonging and identity. He assiduously recorded the 392 tribes composing the Afghans, and included a map denoting the location and geographical limits of each. These tribes were governed by a “republican spirit,” he wrote, especially those inhabiting the hills between what is today Afghanistan and Pakistan. Recognizing a past he believed himself familiar with, Elphinstone compared the Afghan tribesmen to the Highland clans of his native Scotland. He even went so far as to compare Khushal Khan Khattak, revered today as a Pashtun national poet, to William Wallace of Braveheart fame.

Despite the intervening two hundred years, our understandings and views of the Afghans remain beholden to the image Elphinstone originally authored. The U.S. military’s ethnolinguistic map of Afghanistan today is little more than an updated version of that included in the 1815 edition of An Account. The vision of a rural “tribal society” bound by ancient customs and traditions such as the “Pashtunwali,” the so-called Pashtun tribal code, remains deeply embedded in policy prescriptions. Serious international players—from the U.S. military and their Human Terrain System to the International Crisis Group’s reporting on the country—frame their analyses around such tropes.

For a decade and a half, Washington has failed to provide a strategic and political framework for success in the longest war in American history. The basic debate regarding whether U.S. efforts in the country should be focused on counter-insurgency or counter-terrorism has always framed the Afghan state as incidental to Western aims and efforts. Why? A basic ignorance about Afghanistan and a profound unwillingness on the part of policymakers to address this intellectual illiteracy lie at the core of any answer.

From the very start of the Western intervention in Afghanistan in October 2001, little effort was expended at anything more than a cursory understanding of the country. The trope of the “Great Game”—the 19th Century Anglo-Russian rivalry over Central Asia—re-emerged, with a new “Great Game” being played between regional powers, international jihadis, and the West. As in the original game, Afghanistan and its people were nothing but pawns, wholly denuded of agency. The West believed it had to construct the country de novo with the Bonn Agreement, which set up a constitutional structure largely drafted by Afghan exiles. When that constitution did not fit the political exigencies of the 2014 presidential election, John Kerry led the negotiations which unceremoniously scrapped it as quickly as it had been ceremoniously enacted.

The entire approach was based upon a dated vision of Afghanistan, which accounted neither for the fact a third of the population had been refugees since 1979, nor the integration of the populace, if not the country, into a globalized economy. The United States entered the war with one academic center dedicated to the study of Afghanistan—the Center for Afghanistan Studies at the University of Nebraska at Omaha—run by a handful of ex-CIA employees. The U.S. government had few staff members with linguistic competence in the languages of the region and virtually no understanding of the country prior to 1979, or at best President Eisenhower’s visit twenty years earlier. “Experts” on Afghanistan in Washington and elsewhere, who seemed to surreptitiously spawn out of the ether following the American invasion, were overwhelmingly repurposed “terrorism experts” with little to no background on the country.

Such ignorance has allowed the belief to take root that Afghanistan’s problems lay not in its politics, or even the political choices of the West, but rather in its culture. Afghan culture, especially its “tribal” element with its penchant for violence and religious extremism, remains unfathomable to Western policymakers and publics alike. Many blame a culture of corruption, graft and nepotism, itself an outgrowth of tribal and sectarian politics, which constantly endangers the promise of a stable, functioning and democratic state. For years, Afghanistan has remained at the bottom of Transparency International’s Corruption Perception Index, and at the top of Foreign Policy’s Failed/Fragile State Index. From rise of the Taliban in the 1990s, to the collapse of Kabul Bank in 2011, to the current framing of the president’s cabinet building as technocrats versus strongmen, Afghan politics are depicted in simplistic dichotomies pitting its backward culture against much needed reforms from the West.

American actions, both military and political, have since day one been predicated on a “tribal”— sometimes more expansively framed as “ethnic”—understanding of Afghan society. The United States military has become so invested in this vision of Afghanistan that it created its own “cultural knowledge” program—the Human Terrain System—which in effect serves as a kind of in-house anthropological service. Be it arming “tribal” militias, known as arbakai, to police the countryside (and in so doing supplant state authority), or ensuring the correct ethnic composition of the former-President Hamid Karzai and now-President Ashraf Ghani’s administrations, Americans have perpetually been searching for the right formula to balance Afghan’s cultural identities to create a stable political order. In this rendering, culture is key to cracking the Afghan nut.

The problem with such understandings, and the approaches they give rise to, is that they supplant culture for politics. Afghans are not viewed as rational actors pursuing clear political interests shaped by history, but rather creatures of their culture and tradition, themselves the product of the country’s ancient past. Knowledge of the country’s history and politics is unnecessary because they are not the drivers of its present. The superficiality of knowledge of Afghanistan’s history is distressing. For many, Afghanistan simply did not exist until 1979 when it was rendered into existence by the invasion of the Soviet Union, and subsequently saved by Sylvester Stallone in Rambo III. Such ignorance is symptomatic of the belief that the country’s problems are the product of a timeless past and culture rather than temporally specific events driven by particular people pursuing particular interests.

This vision, though shaped by An Account of the Kingdom of Caubul, is starkly at odds with it. Elphinstone was ultimately a sympathetic and keen observer of the Afghans and knew better than anyone the limits of his comprehension. He understood the intricacies and dynamism of Afghan court politics. Most importantly, he recognized that they were driven by individual acts and calculus, even if structured by social and cultural conditions.

By attributing the failure of American efforts to Afghan culture, and thus the past, those making such arguments imply there is little which could have been done, and perhaps less that should have been done. The Afghans are responsible for their own mess and it is not West’s place to clean it up for them. The past and culture negate politics and policy. Such views are deeply self-exculpatory and self-serving of those who hold them.

Culture, or at least Afghan culture, is not at fault here. Rather, it is the deeply ahistorical culture of the American policy community that bears much responsibility. Afghanistan, just like the rest of the world, is a profoundly different place in 2015 than it was in 1815. In the interval, it has been remade by history. Elphinstone would be the first to emphasize this to policy-makers today, just as he did in 1839 when he criticized the British invasion of Afghanistan as part of the First Afghan War. American policy cannot positively affect the Afghan present until it takes seriously the country’s history. Until it does, the United States will continue to be an unknowing object, rather than agent of history in Afghanistan.

Benjamin D. Hopkins is a Fellow at the Woodrow Wilson International Center for Scholars and Associate Professor of History and International Affairs at The George Washington University. The opinions expressed in this commentary are solely those of the author.