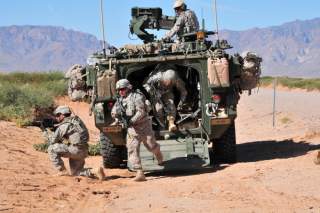 The announcement that the U.S. Army is to lose 40,000 troops and 17,000 civilian employees by 2017 has taken some by surprise. Although it has long been known that the Obama administration was to pursue reductions in the size of the military in line with sequestration, the timing by which those economies are to take place is causing some controversy—especially in light of ongoing events in the Middle East and Europe.

But these cutbacks have little to do with Obama’s assessment of the short-term security environment. Instead, they are yet more evidence of a macro-level acceptance by America’s political elite that the country’s global supremacy should be allowed to dwindle—particularly in military terms. By countenancing the strictures of sequestration instead of trying to find a bipartisan escape from mandated cuts, the U.S. political class has effectively acquiesced in a winnowing away of the country’s military supremacy, come rain or shine.

It should be remembered that budget sequestration as per the Budget Control Act of 2011 was never actually supposed to come into effect. On the contrary, the package of cuts architected four years ago was specifically designed to be so unpalatable to legislators that they would be motivated to find a political pathway to avoid their implementation. Sequestration was a commitment device to tie the hands of congressmen; a doomsday device that would force even the most bitterly partisan of politicians to cooperate with one another towards the goal of reducing public spending and raising revenues.

However, the so-called “supercommittee” charged with circumventing sequestration failed at its task to put the federal budget on sound footing. Spending plans that by their very nature were supposed to be unwanted by America’s political parties suddenly became the new normal, and the U.S. military found itself firmly on the chopping block.

That the Washington nomenclature revealed itself to actually prefer sequestration—a punishment that was meant to be of their own worst nightmares—to a fiscal deal that might have spared the military is telling. Twenty-five years ago, Charles Krauthammer wrote that the biggest threat to America’s “unipolar moment” would be exactly of this nature: not an external challenge to U.S. dominance, but rather a domestic unwillingness to pay the cost of international leadership. More recently, Robert J. Lieber has made the same case with some persuasiveness.

Of course, the U.S. military will not be eclipsed overnight because of these planned reductions. Nor even will it be surpassed after 2017, when the Army is pruned to around 450,000 troops (its lowest number since 9/11). Its (still) vast size, technological prowess, superior training and unrivaled global footprint will guarantee that the U.S. military remains head and shoulders above its nearest rivals over the immediate term. After all, the Pentagon can still boast the best military in the world without being at its best.

The real risks to U.S. primacy are (1) if sequestration is allowed to continue extracting a toll on the Army and the other branches of the armed forces; and (2) if enough Americans come to see cuts to the military as harmless or even desirable, initiating a spiral effect whereby domestic groups begin to urge military downsizing above and beyond what is currently being contemplated under sequestration.

Under current spending plans, projections are that the Army will drop to around 420,000 active troops—a size that military planners warn would jeopardize the military’s ability to effectively deploy to multiple war zones at any one time. Not only would this number be a far cry from the circa 566,000 troop–level seen at the height of Iraq and Afghanistan, but it would double-down on the Pentagon’s previous repudiation of a decades-old mantra that the United States ought to be able to fight multiple land wars simultaneously.

Under President Kennedy, the military was supposed to be capable of waging two-and-a-half full-scale wars at one time. In the 1980s, Casper Weinberger even articulated plans for a three-and-a-half war strategy. But in 2010, Robert Gates announced that the United States would no longer even prepare to fight two wars simultaneously, preferring instead to organize itself for nontraditional threats like cybersecurity and terrorism.

This gravitation away from planning to fight and win large, land-based wars will only intensify if the Army shrinks to a size not seen since World War II. And once the United States loses its ability—indeed, its very desire—to maintain credible military primacy over all comers, a reasonable question might be posed as to why an Army of 420,000 or 400,000 or even 300,000 is necessary? A lighter global footprint will not necessarily be more attractive than no global footprint whatsoever; if something isn’t worth doing wholeheartedly, perhaps it isn’t worth doing at all.

Whether or not they are thinking in these terms, America’s leaders are sanctioning what could end up amounting to a major strategic adjustment. The implicit choice facing them is between investing to maintain military primacy or acquiescing in its loss. Quietly, reluctantly—and perhaps even unintentionally—fiscal policies are militating towards the latter.

Retrenchment is not necessarily a bad thing, of course; there are compelling reasons for why the United States might wish to resize its overseas commitments amid a changing geostrategic environment. The problem would be if consequential decisions were being taken without proper debate—if the blunt and out-of-control instrument of sequestration was to dictate the course of major strategic choices, rather than the country’s elected leadership.