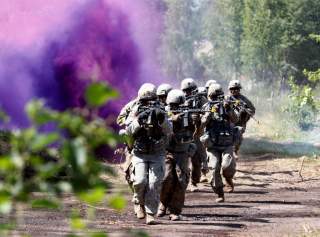 Interactions between allies and partner nations require a common language, shared understanding and mutual trust. Furthermore, interoperability between militaries has become more important to accomplish unified efforts and achieve the military objectives of collaborating coalitions. The United States invites international military students from various countries to study all aspects of the profession funded through security assistance programs such as the International Military Education and Training program. This whole effort contributes to the United States’ strategic objectives outlined in its latest National Security Strategy and National Defense Strategy.

The critical thinking and decisionmaking these students learn require an understanding of ethical and moral philosophy. This complex reasoning encounters profound contradictions in practice when these military professionals attempt to implement these philosophical values in their home countries. Regardless some devastating consequences to the careers of a few international military students, most outcomes of inviting them to the United States to study are promising and represent an investment with high returns for both parties.

Today’s complex operational environment imposes on military professionals arranging, recommending, and advancing theories of right and wrong conduct in situations where their moral or ethical judgments are in play. In addition, the sensitivity of their decisions and the consequences they have make military decision making even more dependent on ethical and moral grounds. When an ethical choice is between rights and wrong, deciding to do what is right is more of an issue of moral courage. In most situations, the ethical choice that military leaders have to make is trading in the shades of grey or between two rights, which make their decisions much more difficult. Further, every time a serious moral judgment is made, the military leader making the judgment becomes that judgment.

When bringing the ethical principles and moral values that they learn in their education in the United States back to their home countries, international military students find themselves in an ethical dilemma. The inconsistencies with the entrenched political interests in their motherlands impede these military professionals’ ability to improve their countries’ military organizations. Their decisionmaking skills, based upon their new ethical mindset, conflict with their country’s military organizational culture developed from their own social construction of reality and manifest in their resistance to implementing change in the organization. Furthermore, this ideal way of thinking based on ethical principles and moral values and the reality found back in their home countries sometimes contradicts with their organizations’ interests or some political parties’ agendas.

Some consequences of these contradictions could be devastating to the careers of international military students and might escalade to life-threatening. This raised the voices against inviting military professionals to the United States to study. In some illustrations, military officers from Turkey sought political asylum in the United States after the 2016 failed coup attempt in their home country. Most of their families and belongings were left back in Turkey, and were abandoned. What they learned during their professional education in the U.S. military was not compatible with what they have back home. In another example, an aborted coup led to the death of another graduate student from U.S. military institution. A Gambian officer was trying to bring change to his people, advance democracy in his country and modernize his military organization. His beliefs of mirroring those ethical principles and moral values that he acquired in his studies with the U.S. military had a reverse effect when faced with corruption and political repression.

Nonetheless, the U.S. military education for international students advances the profession of arms by teaching foreign military leaders how to be successful in solving complex problems based on doing the right thing. Educating international military students develops good “cardinal virtues” of character that Plato advanced such as wisdom and justice that would regulate their emotions and avoids acquiring bad character traits like cowardice and injustice. Yet, international military organizations need assistance to reach these virtues in decision making and to resolve ethical issues and problems. The U.S. military education represents these means to attain these qualities and according to the universal rules and principles of “duty theory” that Samuel Pufendorf, John Locke, Immanuel Kant, and W.D. Ross advance, the U.S. military is responsible and has an obligation toward other foreign militaries of sharing their knowledge, experience, and education.

On the other hand, international military students do not wait until they become mature decision-makers and in a position where they can impose changes. These professionals are not changing agents as soon as they arrive at their home countries. They have to possess self-discipline and strategic patience to wait the right moment and the correct timing when then can influence decisions to employ those ethical perspectives and impose changes that would improve their countries’ militaries. Meanwhile, they can succeed in the complicated business of ethical thinking by knowing how to balance between employing ethics theories and entrenched unethical organizational culture at hand. This requires some level of self-awareness to know the nature of the decision and understand the values and perspectives of their respective organizations to advance the thought process they acquired and employ them for decisions and their justifications.

Generally, the results of inviting international military students to the United States to study are more favorable than unfavorable. This significant investment of time and treasure by the United States has high returns. These revenues can be seen in the yearly induction ceremony to the Command and General Staff College “Hall of Fame” of those leaders who have reached high positions in their relative countries. These military professionals were able to advance within their organizations and their country, morality and ethics learned in their education in United States institutions. Besides, the unintended adverse consequences of international military students’ actions and decisions once they return to their home countries are merely foreseen. These consequences are, using the “virtuous consequentialism” theory, permissible because the intent (military education) is undertaken for the sake of good effects (advancing ethics).

Because military professionals face ethical decisions on daily bases, therefore, studying ethics should happen before this occurs. These decision makers need to know what influence each perspective and how to employ different ethics theories to justify their decisions. The consequences of these ethical decisions can be made somewhat slighter by identifying when and which perspectives are the most important to consider for the question at hand. Teaching these theories aims to help international military professionals to acquire moral standards that regulate their right and wrong conduct. The practical and moral considerations behind international military students studying in the United States seem in most of the established theories and philosophies of ethics supporting the act of expectations for career officers. Thus, educating them in the fields of values, ethics, morality and virtues involving concepts of right and wrong behavior is a high-value low-cost investment. With that being said, both the hosting and the hosted countries military leadership should continue these education programs that advance the military profession.

Maj. Jean Dagher is an international military officer from the Lebanese Army and a part of the International Military Education and Training program. He is currently a student at the School of Advanced Military Studies, in Fort Leavenworth, KS.