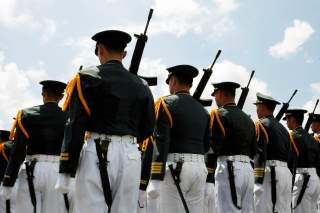 In mid-April, CNN became the latest among scores of news organizations in recent years to err in describing Washington’s Taiwan policy. In a piece on the military drills off Fujian, CNN originally stated: “Officially, Washington acknowledges Taiwan is part of mainland China under the Communist Party’s ‘One China’ policy.” In reality, the United States acknowledges that Beijing claims Taiwan, but does not recognize that claim. The official U.S. position is that the status of Taiwan remains undetermined, and that Taiwan is not currently part of China. The Communist Party’s One China principle plays no role in the United States’ one China policy.

CNN’s writers are hardly the only people to get this wrong: this error is widespread among journalists. It occurs largely because the U.S. government position on Taiwan went underground in the early 1970s, when Nixon and Kissinger decided to leverage the Taiwan issue for China’s cooperation on Vietnam. Prior to that, for two decades State Department officials had annually reported to Congress the U.S. position that Taiwan’s status was undetermined. Nixon went on to infamy and Kissinger to consulting businesses in China, and the U.S. position became the incomprehensible word salad that reporters encounter today.

At present, searching U.S. State Department texts, it is nigh impossible to find a clear statement of the U.S. position on Taiwan. Washington officials respond to queries about U.S. Taiwan policy with a string of historical references: the Communiqués, the Taiwan Relations Act, the Six Assurances, peppered with words like “consistent” and “status quo.” Outsiders receiving this catechism are like medieval peasants hearing the Catholic mass in Latin: enthralled by the ceremony, but fundamentally lost.

If the United States wants to help Taiwan, one of the simplest and most effective ways would be for U.S. officials to clearly and consistently communicate that Washington views Taiwan’s status as undetermined, a position that reflects international law.

Correctly describing Taiwan’s status whenever possible would have two beneficial effects. First, it would aid Taiwan in its struggle against being annexed to China. Instead of appearing provocative, Taiwan could be depicted a site of legitimate, legal resistance to tyranny and expansion. This would reposition Taiwan as a potential object of sympathy and support in public discourse. Educating the media, and setting a forthright tone, can change the way journalists talk about Taiwan. Other nations, such as Australia, Canada and Japan, who similarly hold that Taiwan’s status remains undetermined, might then be encouraged to make their position more open and accessible to the public.

In discussions of Taiwan, news organizations typically combine erroneous statements about Taiwan’s status with commentary warning that China considers Taiwan part of its territory. Generally, no one is permitted to speak for Taiwan, meaning that these presentations inherently support Beijing’s side.

This biased narrative exists in part because reporters are often ignorant, and in part because they prefer to highlight the Taiwan-China relationship as a site of tension, because that sells newspapers and draws clicks. The result is that readers perceive that Taiwan is attempting to break away from China, of which it is currently a part, and which it might even have some strange right to claim, when in reality Taiwan is attempting to ratify in law a status it already possesses in fact: independence. The current narrative thus delegitimizes Taiwan’s desire for independence and helps China.

Imagine if, instead, each time the media mentioned that China considers Taiwan a breakaway province, reporters then wrote in the following sentence: “However, under U.S. policy and international law, Taiwan’s status remains undetermined. Polls show that the majority of people in Taiwan support independence for the island.”

Elsewhere the media does this routinely. Consider this unvarying double standard: in the Western media, Baltic states resisting Russian expansion are typically presented as plucky democracies engaged in legitimate resistance, and Russian territorial demands are presented as openly expansionist and illegitimate. But Taiwan, similarly resisting annexation by a neighboring giant, is painted as a provocative troublemaker.

Second, U.S. officials would also educate the American public on why Taiwan should be supported. Backing underdog democracies against authoritarian expansionists plays well with the U.S. public. At present, its hidden position on Taiwan makes the U.S. government appear strangely conflicted: the United States may defend Taiwan against attack from China, yet ordinary people read in the papers that Washington “acknowledges” China’s claims to Taiwan. Why should Americans spend blood and treasure to defend an island the government thinks is part of China? Moreover, it would also situate a military intervention on behalf of Taiwan within international law for both the American public and global audiences.

It is long past time the U.S. position stopped being lost in a fog of verbosity. That policy may once have been useful in avoiding friction with China, but it has become a lifeless ritual performed out of reflex rather than need. American officials should lead the way in shifting the discussion on Taiwan to one more favorable to U.S. interests and to Taiwan itself. Unlike the burgeoning trade war or freedom-of-navigation operations in the South China Sea, a constant, clear statement of Taiwan’s undetermined status under U.S. policy and international law would have little material cost, yet could yield enormous real benefits over time. For an era of cutting costs, that would be appropriately cost-effective.

Michael Turton blogs on Taiwan politics and history at The View from Taiwan.