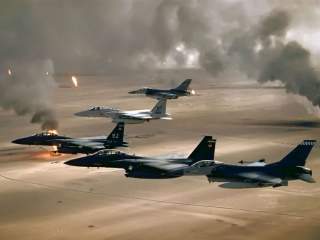 Twenty-five years ago this week, on February 24, 1991, the first United States ground invasion of Iraq began. The first Bush administration had clear UN and congressional mandates to liberate Kuwait. More than thirty countries contributed ground forces, and the Soviet Union was a critical diplomatic partner. After a punishing six-week air campaign, the ground battle seemed to be over almost as soon as it had started, displaying the American military’s tremendous tactical and technological superiority. But amid talk of a new world order, the hundred-hour ground invasion was only the opening chapter in America’s tragic twenty-five-year Iraq story.

Leaving Saddam in power was the correct decision, but it created a dilemma: what to do with an implacably hostile tyrant. As with Germany after World War I, Saddam had every incentive to challenge the postwar settlement. The economic embargo imposed to compel Iraq’s withdrawal from Kuwait remained after that withdrawal was complete. Because no real attempt was made to find a more durable postwar settlement—that would have constrained the Iraqi military and deterred chemical, biological and nuclear research, while mitigating the catastrophic impacts of a long-term full embargo—the diplomatic effort to sustain the sanctions regime was bound to increase with time.

Thus, tactical postwar adaptations gradually calcified into contradictory policy objectives of containment and regime change. Saddam’s willingness to sacrifice his people’s welfare gave him a powerful diplomatic weapon in resisting sanctions and weapons inspections. By the time the George W. Bush administration took office in 2001, the sanctions regime was unraveling amid growing outrage at the profound suffering of the Iraqi citizenry.

It is now understood that Osama bin Laden’s masterstroke was blowback against the American military deployment in the Arabian Peninsula. But the second Bush administration’s response was a foreign policy blunder matched in modern American history only by the Vietnam War.

Saddam was removed from power in fewer than four weeks, but the incompetence of the occupation that followed defied comprehension. The simultaneous dismantling of the Iraqi army and the Baath Party exacerbated the devastation of decades of war and economic isolation, unleashing primordial forces that Washington struggled to comprehend, and that 150,000 American troops could not control.

Terrorist organizations had long operated in the shadows of the Middle East. But only since the second invasion of Iraq have they been able to recruit thousands of foreign fighters to the heart of the region, control vast territory and engage in nihilistic destruction on such a grand scale.

According to the Chicago Project on Security and Terrorism, an astounding 42 percent of the roughly 4,800 global suicide attacks since 1982 have occurred in Iraq, all of them since 2003. Before 2003, global suicide attacks averaged seventeen a year. Since then, they have increased by two thousand percent to an average of 370 per year.

Like Nixon’s Vietnam inheritance, President Obama faced an untenable commitment for marginal strategic benefit as he entered office in January 2009. Nearly four thousand American soldiers had died and credible estimates of the war’s full costs ran as high as $3 trillion, while Iraqi leaders were no closer to resolving fundamental political divisions.

Two months before leaving office, the second Bush administration signed a bilateral security agreement requiring American combat forces be withdrawn from Iraq by the end of 2011. Many believed the agreement would be extended, but President Obama was determined to fulfill his campaign commitment to complete the withdrawal. In December 2011, the withdrawal was completed and America’s war in Iraq—the second in two decades—was declared over. But this modicum of stability, too, proved illusory.

The American military occupation was deeply unpopular among Iraqis, and the parliament was never going to provide legal immunities necessary to allow a large-scale American troop presence to continue. But despite tepid negotiations for a follow-on military presence, Obama gave the distinct impression he was content to take no for an answer. A more determined approach might have yielded a creative political mechanism for a limited, noncombat, follow-on American troop presence.

Might the collapse of the Iraqi army against the self-proclaimed Islamic State (IS) in 2014 have been delayed or prevented? Certainly, Prime Minister Nouri al-Maliki’s unique incompetence belied the decades-long devastation of Iraq’s political culture. The reconstituted military and police retained certain dysfunctions that limited the effectiveness of their Saddam-era predecessors. On the other hand, Maliki’s most egregious blunder was the purging of Iraq’s senior officer corps, replacing them with corrupt cronies. An American noncombat military presence might have discouraged some of these worst sectarian impulses, improved accountability and ameliorated the sharp decline in morale.

Instead, Iraq began again to fall apart, slowly at first, then more quickly as armed revolution began to shake Syria. Eventually this disintegration forced Maliki’s ouster, but not before the Iraqi army collapsed like a house of cards in Mosul in June 2014, against a vastly outnumbered IS force. By August, the American bombing of Iraq had commenced again.

At it its core, the American experience in Iraq has been a failed twenty-five-year effort to address Iraq’s internal political dysfunction. The George H.W. Bush and Clinton administrations attempted this through an awkward balance of coercion, containment and, at least rhetorically, regime change. The second Bush administration undertook a disastrous imperial nation-building effort. The Obama administration was committed to disengagement until the declaration of a terrorist caliphate pulled it back in.

With a new administration taking office in less than a year, three important lessons can be drawn from this most unhappy experience. First, the United States needs to dispense with ideological approaches. The hubristic excesses of the second Bush administration in attempting to recreate the Middle East are well documented. But the Obama administration was itself slow to adapt to changing circumstances. As a result, U.S. policy toward Iraq since 2003 has resembled an ideological pivot on the narrow question of the efficacy of military force. While the military’s overuse has repeatedly been demonstrated incapable of resolving underlying political problems in the Middle East, both neoconservative and neo-isolationist approaches have proven profoundly lacking. Meanwhile, an assortment of economic, political and diplomatic instruments is too often treated as an afterthought.

Second, policy success is difficult to find where policy objectives are ill defined. Regrettably, the United States has lacked clear objectives in Iraq since Saddam’s eviction from Kuwait twenty-five years ago. As the borders between Syria and Iraq have been erased, the central locus for U.S. policy has shifted to Syria. In contrast with Putin’s ruthless focus on Assad’s preservation—which goes a long way toward explaining Russia’s relative success—American policies in Syria are every bit as contradictory today as in Iraq a decade ago. The next administration will have to clearly decide whether its overriding priority is the defeat of the Islamic State, the removal of Bashar al-Assad or ending the humanitarian catastrophe, since each requires a somewhat different approach.

Third, and perhaps most importantly, the global policy community desperately needs tools to address the profound institutional deficiencies of the broader Arab world. The U.S. military has solutions that are often quite effective in addressing security threats and challenges. Unlike in 1991, however, the fundamental challenges in the Middle East today are primarily political in nature. The Islamic State’s terrifying emergence is rooted in decades of catastrophic governance failures in Syria and Iraq, which cannot be bombed away. Yet, after twenty-five years of near-continuous U.S. military engagement, Washington is no more competent today in supporting better governance, suggesting that the United States is likely to remain marginal to such efforts going forward.

Addressing these institutional failings is central to the emergence of a more stable Middle East. An important starting point for the next administration is recognition of the magnitude of the challenge, understanding the relatively marginal role Washington will play, and appreciation for the profound tension between America’s short-term security needs and the region’s long-term reform needs.

The U.S. invasion of Iraq in February 1991 marked the high water mark of American post–Cold War power. The Berlin Wall had fallen; the Soviet Union was existential nemesis turned partner; the demons of Vietnam vanquished. Yet for twenty-five years, four successive administrations have bequeathed grim inheritances to their successors involving this faraway desert land, hitherto marginal to American foreign policy.

Eleven months from now, a fifth American administration will begin its own chapter with a happy ending nowhere in sight.

Perry Cammack is an associate in the Middle East Program at the Carnegie Endowment for International Peace.