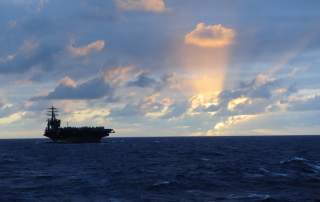 Since the publication of CSBA’s paper, the Pentagon has repeatedly stated that it does not represent U.S. policy. Both the Chief of Naval Operations and the Chief of Staff of the Air Force have stated ASB is not a strategy and is not directed at China. However, The Joint Staff has also published the Joint Operational Access Concept (JOAC) that provides the doctrine for gaining access in an A2/AD environment—and it uses many of the ideas from the CSBA paper. At the same time, the Pentagon has created an Air-Sea Battle Office, not as an operational concept, but “a help desk for the A2/AD fight.” One can forgive our allies if they are somewhat unclear on exactly what ASB is.

A military strategy that supports the national strategy

The U.S. commitment to peace and avoiding conflict with China is genuine and unambiguous. Keeping that peace depends in part on an affordable military strategy that goes well beyond “operational concepts” to address China’s growing military and economic strength and its clear intent to extend its power and presence in Asia. Any U.S. military strategy for Asia must achieve six objectives: (1) deter China from military action to resolve disputes, while encouraging its continued economic growth; (2) ensure access for U.S. forces and allied commercial interests to the global commons; (3) assure Asian nations that the United States is both willing to and capable of remaining engaged in Asia; (4) discourage friends and allies from taking aggressive steps that further destabilize the region; (5) in the event that deterrence fails, achieve U.S. objectives with minimal risk of nuclear escalation; and (6) be visible and credible today, not years in the future.

In the absence of any published military strategy, we propose “Offshore Control: Defense of the First Island Chain” as an effective and affordable approach for a conventional conflict with China. Offshore Control establishes concentric rings that deny China the use of the sea inside the first island chain, defend the sea and air space of the first island chain nations, and dominate the air and maritime space outside the island chain. Offshore Control does not strike into China but takes advantage of geography to block China’s key imports and exports and thus severely weaken its economy. No kinetic operations will penetrate Chinese airspace. Prohibiting penetration is intended to reduce the possibility of nuclear escalation and make conflict termination easier.

This approach would exploit China’s military weaknesses, which increase exponentially beyond the “first island chain” that runs through the Japanese Archipelago, the Ryukyu Islands, Taiwan, the northern Philippines, and Borneo to the Malay Peninsula. Allied naval and air forces attempting to operate near or on Chinese territory face daunting odds. In contrast, allied forces fighting as part of an integrated air-sea-land defense of the first island chain gain major tactical advantages over Chinese forces. Outside that arc, Chinese capabilities dwindle markedly.

Denial as an element of the campaign plays to allied strengths by employing primarily attack submarines, mines, cruise missiles and a limited number of air assets inside the first island chain. This area will be declared a maritime exclusion zone with the warning that ships in the zone will be seized or sunk. While the United States cannot stop all sea traffic in this zone, it can prevent the passage of large cargo ships and large tankers, severely disrupting China’s economy relatively quickly. As an integral part of denial, any Chinese military assets outside the Chinese twelve-mile limit will be subject to attack.

In most foreseeable scenarios China would act alone. If the United States manages its alliances well, it would not. The defensive component of Offshore Control will exploit this advantage to bring the full range of U.S. and allied assets to defend allied territory and encourage allies to contribute to that defense. It exploits geography to force China to fight at long range while allowing U.S. and allied forces to fight as part of an integrated air-sea-land defense over their own territories. In short, it will flip the advantages of anti-access/area denial (A2/AD) from China to the allies. Numerous small islands from Japan to Taiwan to Luzon and on to the Straits of Malacca provide dispersed land-basing options for air and sea defense of the apparent gaps in the first island chain. Since Offshore Control will rely heavily on land-based air and sea defenses, to include mine and countermine capability, we can encourage potential partners to invest in these capabilities and exercise together regularly in peacetime. The United States will not request any nations to allow the use of their bases to attack China. The strategy will only ask nations to allow the presence of U.S. defensive systems to help defend that nation’s air, sea and land space. The U.S. commitment will include assisting with convoy operations to maintain the flow of essential imports and exports in the face of Chinese interdiction attempts. In exercises, the United States could demonstrate all the necessary capabilities to defend allies—and do so in conjunction with the host-nation forces.

The dominate phase of the campaign will be fought outside the range of most Chinese assets and will use a combination of air, naval, ground and rented commercial platforms to intercept and divert the supertankers and very large container ships essential to China’s economy. Interdicting Chinese energy imports will weaken but not cripple China’s economy. China can and has taken steps to reduce the impact of an energy blockade. Fortunately, exports are of even greater importance to the Chinese economy. Those exports rely on large container ships for competitive cost advantage. The roughly 1000 ships of this size are the easiest to track and divert. Naturally, China will respond by rerouting, but all shipping to China must pass through the First Island Chain. Even if China seizes a portion of the chain, the United States and its allies can use the more distant choke points of Malacca, Lombok, Sunda Straits and the routes south of Australia to cut trade from the west. To cut trade from the east, the United States needs only to control the Panama Canal and the Straits of Magellan—or, if polar ice melt continues, the northern route.

While such a concentric blockade campaign will require a layered effort from the straits to China’s coast, it will mostly be fought at a great distance from China—effectively out of range of most of China’s military power. The only ways for China to break the blockade are to build a global sea-control navy or develop alternative land routes. A sea-control navy will require investing hundreds of billions of dollars over decades. Alternate overland routes simply cannot move the 9.74 billion tons of goods or 155,017,531 twenty-foot equivalents (TEUs) China exported by sea in 2012. This is the equivalent of roughly 1000 trains per day each way over the two rail lines that link China to Europe.

Further contributing to Offshore Control’s credibility is the fact the United States can execute the campaign with the military forces and equipment it has today. Unlike CSBA’s AirSea Battle Concept, it does not rely on expensive, highly classified, developmental defense programs for success. Rather, the United States can exercise the necessary capabilities with its allies now. We don’t have to ask our allies and China to believe us when we tell them our top-secret systems will work. Instead, we can demonstrate that today’s capabilities are sufficient to execute the strategy and do so in exercises with allies.

This brings us to the end the strategy seeks. Offshore Control is predicated on the idea that the presence of nuclear weapons makes decisive victory over China too dangerous to contemplate. The United States does not understand the Communist Party decision process for the employment of nuclear weapons, but it does know the Party will use all necessary means to remain in power. Instead of attacking China where it is strongest, Offshore Control seeks to use a war of economic pressure to bring about a stalemate and cessation of conflict with a return to a modified version of the status quo. Faced with the threat of economic collapse, China’s leaders are far more likely to bargain. Theoretical strategists may question the lack of a path to decisive victory, but decisive victory falls outside the logic of conflict between nuclear-armed great powers. Instead, one seeks to avoid the clash and, failing that, to achieve acceptable outcomes that enable all sides to back away. In this sense, Offshore Control offers a more realistic and pragmatic roadmap to resolution and peace.

Perhaps the most important security issue for the United States and its friends in the Pacific is how to encourage China’s growth and continuing integration into the world economy, while still deterring it from using force to achieve its goals. In short, rather than great-power rivalry, we seek to achieve great-power coexistence.