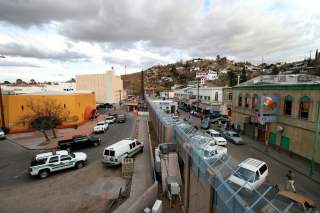 A U.S. PRESIDENTIAL candidate publicly claimed that Mexico is a land of criminals, drug traffickers and rapists; rather than being forced to withdraw, he was rewarded with his party’s nomination. Is it any wonder that for generations, Mexican policymakers saw fit to define themselves in opposition to Washington? After the Mexican-American War, when the latter dispossessed the former of its vast lands north of the Rio Grande, bilateral relations historically were cool and formalistic, overlain by Mexico’s skepticism of the United States and an acute sense of sovereignty. Family and economic ties kept the relationship vibrant at local and regional levels, but the state of the official relationship was well captured by former president Porfirio Díaz, who reportedly lamented, “Poor Mexico [is] so far from God [and] so close to the United States.”

For their part, U.S. officials generally saw Mexico as a corrupt, barely democratic backwater pursuing a foreign-policy agenda contrary to Washington’s aims, particularly in Latin America and in international forums. The nation was considered to be a source of regional financial instability, ideological ferment and lawlessness, where the United States periodically felt it necessary to intervene, at times militarily, to protect its own interests.

Of course, both visions were caricatures at best—willful misrepresentations at worst. But they more or less defined the bilateral relationship until leaders in both countries came to their senses and realized that, if they were to be competitive in a rapidly globalizing world, they would need to cooperate. For Washington, that meant recognizing that it could more effectively pursue its economic and security interests by befriending, rather than antagonizing, the country sharing its two-thousand-mile southern border.

IT WAS Mexico, after the wreckage of the 1980s’ peso crisis, which first suggested a fundamentally new approach. The keystone of the effort was proposing a new economic relationship with the United States that, along with Canada, eventually became the North American Free Trade Agreement (NAFTA).

NAFTA was an innovation in economic relations. It was, foremost, designed to increase trade and investment among its three parties through North American economic integration. The deal was aimed at enabling them to better compete with emerging blocks in Europe and Asia that policymakers anticipated would define global economic relations in the twenty-first century. But it was also much more. Mexicans saw NAFTA as the primary vehicle for creating an open-market democracy, a means of providing Mexico with a clear path toward political and economic modernization while institutionalizing an ever-tighter cooperative agenda with the United States.

NAFTA has been a success, even if it has not been the panacea for all ills, as its proponents suggested. Nor has NAFTA been responsible for all the problems that its detractors frequently attribute to it. Since 1993, the year prior to NAFTA’s implementation, U.S. trade in goods and services with Canada and Mexico increased from $290 billion to almost $1.1 trillion in 2014. Annual trade between the United States and Mexico has quadrupled (with Canada, it has more than doubled). Canada is America’s top trading partner; Mexico is its second-largest export market and third-largest trading partner. More than forty U.S. states count either Canada or Mexico as their top export destination. As Mexico’s economy grows, it offers new opportunities to its workers; that, coupled with the still-sluggish U.S. economy, has brought net migration flows to the United States from Mexico to virtually zero.

Perhaps more importantly, beyond tangible commercial benefits, NAFTA institutionalized a vision for North America that would have been impossible absent significant political and economic reforms in Mexico, both catalyzing such reforms and also benefitting from them. NAFTA unquestionably supported Mexico’s democratic transformation by requiring legislative and regulatory changes that might not otherwise have occurred. It empowered new economic constituencies and a growing middle class that has developed an increasingly clear political voice. Mexico’s politics are now more democratic than ever before, and the Mexican people have made clear through the ballot box and recent elections their disinterest in returning to previous ways.

What the negotiators drafted proved to be an effective framework for ordering the majority of North American trade and investment relations as they then existed, enduring economic stresses, political transitions and security crises since that time. What NAFTA left out for political purposes, however, was just as important as what it included. It did not directly address immigration. It did not focus on border infrastructure or management. It did not include energy. It excluded financial coordination. And it did not require changes to the rule of law or judicial reforms. None of these topics would have been realistic to include at the time, and perhaps not even now, but they have subsequently become controversial issues in the U.S.-Mexico relationship. As a result, NAFTA itself has unfairly and unwisely been pilloried as an agreement that only made matters worse. And if NAFTA has been bad for the United States, Mexico and Canada, should it not be abrogated rather than expanded?

The 2016 U.S. presidential campaign threatens to become an inflection point. For the first time since the end of the Depression, the leading candidates of both major political parties have positioned themselves as trade skeptics. Trade expansion is always a tough sell politically, and without consistent positive messaging it is too easy to lose momentum. When major-party candidates go even further, by wrongly claiming that NAFTA has been a “disaster” and that “Mexico is eating our lunch,” and that the only way to make our nation great is to wall ourselves in from outside competition, they put at risk one of the foundations of U.S. economic strength and global competitiveness and millions of related jobs.

But they also threaten to undermine the progress in bilateral relations with Mexico that has been painstakingly, patiently developed over the past generation, giving license again to those on both sides of the border who prefer to see each other as adversaries rather than partners. Recreating the possibility of having a wary or even hostile southern neighbor would significantly reduce cooperation across the entire spectrum of the bilateral agenda, from immigration to drug trafficking, and law enforcement to terrorism. These are not theoretical risks; they are real, reducing cooperation just when the future of the United States is more intertwined with Mexico than ever.

AT THE same time, of course, Mexico is facing its own challenges. The current president, Enrique Peña Nieto, came to power in 2012 with a mandate for reform and the youthful energy to implement an aggressive agenda. After twelve years of center-right presidential administration, which became synonymous with the fight against narcotics and a tremendous toll on lives and security, the Mexican people voted for a return to the Institutional Revolutionary Party (PRI), which had dominated politics for seventy-one years until 2000. They voted for a renewed emphasis on economic growth and a reduction in the violence that had taken over parts of Mexico. Headlines proclaimed this to be “Mexico’s moment,” and expectations ran ahead of reality. With the support of the center-right National Action Party (PAN), Peña Nieto pushed through an ambitious reform agenda. From labor to education to telecommunications to the tax code to energy, the reforms directly addressed those issues that had been identified as holding Mexico back economically and which other previous governments had been unable to pass. The last of these—energy—was perhaps the most significant, opening for the first time in over seventy-five years to foreign investment a sector that had traditionally been at the very heart of Mexico’s efforts at self-determination and control of the commanding heights of the economy. But a recognition that Mexico was being left behind, along with the need for a more sustainable means to finance the national budget beyond contributions from state energy supplier Petróleos Mexicanos (PEMEX), caused the government to push through the reforms that will potentially grow the energy sector while building competitiveness across the economy in the form of greater efficiencies and lower prices, particularly in electricity.

Such significant reforms take time to work through the economy even under favorable circumstances. Unfortunately, just as Mexico was opening its energy sector to outside investors, the global market for oil collapsed, impacting the willingness of investors to look at the Mexican properties under the terms offered and reducing the prices they were willing to pay to procure them. The significant new resources from energy and other investments on which the government was counting have not materialized at the anticipated level. Meanwhile, a sluggish Mexican economy has been growing at just over 2 percent, far less than the level that Peña Nieto claimed he would accomplish during his campaign. Patience for an economic rebound and the favorable fruits of economic reforms has begun to wane, and the political honeymoon has long since expired.

And then there are the twin Achilles’ heels of Mexican politics: violence and corruption. As a candidate, Peña Nieto was required to overcome the memory that many Mexicans harbored of the gross political and economic corruption engendered by the old PRI. A member of the younger generation, to be sure, he was nonetheless forced to push back against allegations that, once in office, he would be seduced by the party’s traditional way of doing business. This was always his primary political vulnerability. Yet, curiously, he never seemed to highlight or prioritize anticorruption initiatives and justice reforms. Similarly, de-emphasizing the fight against cartels and drug traffickers did not make these issues go away. As the government called for increasing external investment, it only pushed crime and violence out of the limelight until they could no longer be ignored.