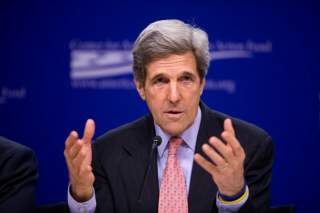 Thirty years ago, the historian and diplomat George F. Kennan published a seminal essay in Foreign Affairs titled “Morality and Foreign Policy” in which he decried the stubborn tendency of the stewards of American foreign policy to treat every problem of geopolitics that arises in the course of human events as soluble, and what’s more, soluble by the American government. It was his considered opinion that it was folly for any government, especially our own, to get caught up in what he called the “histrionics of moralism.”

Though the following sentiment—if expressed today—would cause howls of protest from the self-appointed guardians of human freedom at the McCain Institute, Freedom House, the National Endowment for Democracy, the National Democratic Institute for International Affairs, the International Republican Institute, USAID and, above all, the State Department, Kennan dryly noted that:

Democracy, as Americans understand it, is not necessarily the future of all mankind, nor is it the duty of the U.S. government to assure that it becomes that. Despite frequent assertions to the contrary, not everyone in this world is responsible, after all, for the actions of everyone else, everywhere.

This, like much of the advice he offered during the latter part of his career as a historian and public intellectual, made regrettably little impact.

The by-now distinctly American view that our government has the right, duty and wisdom to bypass the regular channels of intergovernmental discourse and appeal directly to the citizens of other countries has, as few realize, a surprising (and distinctly un-American) pedigree. For some of the history, we must turn again to—who else?—George Kennan.

In his Pulitzer Prize– and National Book Award–winning history of U.S.-Soviet relations in the period between 1917-1920, Russia Leaves the War (1956), Kennan recounts the events leading up to and following the Bolshevik seizure of power in Petrograd in November 1917. One of the very first acts of the new regime was to issue a “Decree on Peace” addressed “to all belligerent peoples and their Governments in the immediate opening of negotiations for a just and democratic peace.”

Kennan noted that the other members of the Triple Entente saw this, quite naturally, as a “bitterly unfriendly move.”

Making matters worse was the fact that the “Decree” was issued without warning to the allied governments and was “directed not only to governments but also, over their heads, to their respective peoples.” This was, according to Kennan, the first use of what later became known as “demonstrative diplomacy,” which would become a staple of Soviet foreign policy.

Kennan defined “demonstrative diplomacy” thusly: diplomacy designed not to promote freely accepted and mutually profitable agreement as between governments, but rather” one designed “to embarrass other governments and stir up opposition among their own people.” If this sounds at all familiar, it should.

No better example of a diplomacy designed to “embarrass” and “stir up opposition” exists than the State Department and USAID’s decades-long involvement in Ukrainian politics. Speaking at the U.S.-Ukrainian Foundation Conference in December 2013, Assistant Secretary of State for Eurasian Affairs Victoria Nuland told the assembled that:

Since Ukraine’s independence in 1991, the United States has supported Ukrainians as they build democratic skills and institutions, as they promote civic participation and good governance . . . We’ve invested over $5 billion to assist Ukraine in these and other goals that will ensure a secure and prosperous and democratic Ukraine.

The return on investment speaks for itself.

Almost as bad an advertisement for our propensity to inculcate democratic “values” in Ukraine is the Alan Gross affair. Mr. Gross, who received a $3.2 million settlement from the U.S. government in December 2014, was held prisoner by the Cuban government for five years. Why? Gross was arrested for smuggling in Internet-related technology that is known to be illegal in Cuba for a pro-democracy program that was run out of USAID. The idea was to funnel the technology to dissident groups who were seen to be incubators of Cuban “civil society”—presumably so they’d be ready when the revolution came.

And finally, we come to Secretary of State John Kerry’s latest State Department budget proposal. In it Mr. Kerry requests "$639 million to help our friends in Ukraine, Georgia, and Moldova as they seek to strengthen their democracies, withstand pressure from Russia, and to integrate more closely into Europe.” The Department’s budget proposal also requests “[o]ver $2 billion for democracy, human rights, and governance programs."

One will note the absence of the word “diplomacy” in any of the foregoing. Its use would prove problematic in the context of promoting “democracy, human rights and governance,” since diplomacy is itself defined, pace Merriam-Webster, as: 1. the art and practice of conducting negotiations between nations. 2 : skill in handling affairs without arousing hostility [emphasis added]. What Kerry is requesting money for is actually the opposite of diplomacy. More than anything else, it’s a kind of counterdiplomacy.

Nevertheless, the point is is that the ideas that now largely animate civil-society enthusiasts today owe a direct debt to Bolshevik practice. Advocates for and practitioners of this sort of engagement might, every now and again, think about in whose footsteps they’re traveling.