America's Worst Nightmare: Assad Is Too Big to Fail 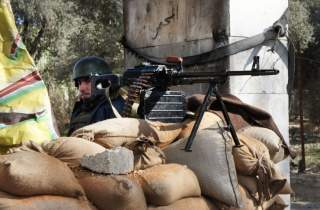 The war in Syria began over four years ago. Since then, hundreds of thousands of civilians have died and millions more have lost their homes. For most people in the West, the human toll imposed by the war is literally unimaginable. Yet Western governments have been active participants in the conflict since its inception, both militarily and diplomatically. All the while, however, the goal of western involvement in Syria—and of the U.S. government in particular—has been unclear. So what exactly is the point of U.S. foreign policy in Syria?

An idealist might hope that individual U.S. foreign policies, including its involvement in Syria, should be judged against something of a humanitarian measuring stick. Has U.S. involvement lessened the human costs of the war in Syria? Is human life and dignity better protected as a result of U.S. actions, or are more people dying and living in abject physical insecurity? While few kid themselves that this is the sole preoccupation of decision-makers in Washington, most would hope that the principle of “do no harm” carries at least some weight.

If asked to account for itself along such a dimension, the Obama administration would presumably be able to conjure something of a response. Bashar al-Assad was cajoled in decommissioning huge portions of his chemical weapons arsenal in 2013, they might say, and thousands of brutal Islamic State fighters have been killed by U.S. forces since airstrikes began in 2014. All the while, the United States has been funneling both lethal and non-lethal aid to supposedly “moderate” factions of the rebel forces.

But still the war rages in Syria. The staggering death toll should be evidence enough that U.S. policy has spectacularly failed to bring about a reduction in fighting, let alone an end to the wider suffering of the Syrian people. Of course, this is not to suggest that responsibility for ending the conflict rests with the United States. It does not. Rather, the point is to clarify whether U.S. actions in Syria have been a help or a hindrance in terms of what most right-minded people might wish for Syria—that is, for the tide of human misery to be stemmed and for the country to be edged towards peace, stability, and ultimately a meaningful process of reconciliation and reconstruction. Assuming just for a moment, then, that U.S. foreign policy should be ordered towards ends of this broad nature, what should have been done in place of the current failure of a strategy?

Many critics of the Obama administration have argued that the correct response would have been to arm the moderate Syrian rebels much earlier in the conflict. According to this viewpoint, an opportunity to topple Assad existed in 2011 and could have been seized. With Assad gone, a new and better Syria could have been built.

There are several problems with this analysis, however. First, the U.S. government had precious little understanding of the rebel forces ranged against Damascus in the early months of 2011; there could have been no guarantee that lethal aid would have successfully led to the ouster of Assad, or that what would have replaced Assad would have been any better.

Second, a strategy of arming the Syrian opposition would have been met by equal quantities of arms flowing into the country from Assad’s own patrons such as Russia and Iran. Whether anti-regime forces were armed in 2011 or 2014, then, might not have mattered much in terms of the war’s trajectory. The civil war was destined to become a long, drawn-out and bloody affair so long as external powers were committed to matching each other’s contributions.

The unspoken alternative—unimaginable at the time, and still difficult to seriously consider today—would have been to stand by as Bashar al-Assad crushed the rebels ranged against him, with or without outside help. For even though Assad is a brutal dictator with little respect for the lives of those he rules, his government in 2011 at least enjoyed a clear chance of gaining a military victory over the rebels if allowed a free hand to pursue the civil war. And if the best way to preserve human life and dignity is to shield communities from the scourge of all-out war then, counterintuitively, allowing Assad to win a relatively quick and decisive war against his detractors might actually have been the most effective instrument of humanitarianism. The swift return of order to the country could even have forestalled the rise to power of the Islamic State.

Of course, the reality is that the United States was not motivated by a desire to bring hostilities to a swift conclusion during the initial phases of the Arab Spring. The United States backed Assad’s opponents not because of their excellent chance of victory or even because of their liberal democratic credentials, but because they represented an alternative to a hostile regime with ties to Iran and Hezbollah. Geopolitical considerations trumped any consideration of how long the civil war might run on for.

It was a similar story in Libya, where it was only because of Muammar Gaddafi’s history of anti-western foreign policies that NATO saw fit to remove him from power—an intervention that Alan Kuperman persuasively argues actually led to more lives being lost than otherwise would have been the case. As Iraq in 2003, Libya in 2011 and the tragedy in Syria show, acting to remove repressive regimes can lead to loss of life on a terrible scale; the toppling of even the most brutal dictators can hardly be held as a one-size-fits-all recipe for promoting human well-being.

The point is not that the United States should enforce a rigid political status quo on the rest of the world at all costs, fearful of all political change because of the conflict and turmoil that is often needed to bring such change about. Certainly few in 2011 called for a “Holy Alliance” type of settlement for the Middle East, whereby regional and external players would coordinate to keep current strongmen in power permanently. (Although it should be remembered that the United States was not uniformly on the side of rebels and protesters during the Arab Spring, with a blind eye being turned to regime crackdowns in Bahrain and elsewhere).

Rather, the point is to highlight what realist scholars of foreign policy have argued for some time: that there are usually very real costs that flow from intervening in the affairs of others. Backing the rebels in Syria could easily be considered in this light, as an eminently understandable and perhaps well-intentioned set of foreign policies that, tragically, may have contributed to death and suffering on a massive scale. Has denying Assad victory really produced better results for Syrians than if the regime had been allowed to assert itself? As sickening as the thought of an unrestrained regime response might be, it is difficult to imagine anything worse than the current horrors afflicting the country.

Again, it warrants emphasizing that humanitarian concerns are not the only criteria applied when formulating U.S. foreign policy. Washington is not beholden to a utilitarian imperative to do the greatest good for the greatest number—and rightly so. But it is still useful to reflect upon what the goals of foreign policy should be: to advance a carefully calculated national interest; to ensure a balance of power among nations; to spread American ideals by opposing tyrants and supporting reformers; or to reduce the aggregate level of suffering borne by people the world over? Because if U.S. foreign policy is going to be responsible for perpetuating conflict, as is arguably the case in Syria, then it is only reasonable that most Americans—and others across the world—can expect for there to be a compelling reason behind it all.