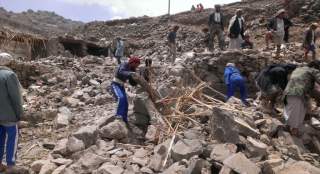 Long before the Trump administration launched missiles at an Assad regime air base in Syria and dropped the world’s most lethal nonnuclear bomb in Afghanistan, it undertook its first military offensive in Yemen. In late January, just two weeks into his term, President Trump ordered a military raid on suspected Al Qaeda targets in that country.

That operation then became infamous for the death of a Navy SEAL, but it has been followed more recently by increased U.S. military attacks on terrorists holed up in Yemen. But whether or not Washington’s military involvement is part of a larger policy in Yemen, America needs to deal with an increasingly difficult conflict of interests in that country, which threatens to make the war against terrorist groups far harder.

It all started in 2011, when the Arab Spring came to Yemen. On the heels of the Tunisian revolution, protesters and opposition parties demanded the departure of then president Ali Abdullah Saleh, who had ruled the country since North and South Yemen united in 1990. The following year, Saleh was forced to abdicate in favour of his vice president, Abdu Rabbu Mansour Hadi. Hadi was put in charge of the transition government, established by a national dialogue process sponsored by the Saudi-led Gulf Cooperation Council.

But Hadi’s stronghold on the country was short-lived. In September 2014, the new resident was forced to flee to the south, after his presidential palace and the capital city of Sanaa were captured by Shiite rebels called the Houthis. Hadi attempted to move his capital city to the southern port city of Aden, but in early 2015, he fled to Riyadh in exile, where he still resides despite the odd flying visit to Aden.

Meanwhile, Saleh has begun to exert increased influence over the Houthi establishment in Sanaa, leaving his imprints on its leadership and filling in positions in its rebel government with his own people. Yet, today, Yemen still lacks an effective centralised authority. Neither the rebels in Sanaa, nor Hadi’s government in Aden, seems to have the capacity to control the entire country.

The underlying cause of this complicated civil war could be traced back to the age-old divisions between the North and the South. While Yemen was reunited in 1990, the resource-rich South always held resentment towards what it saw as the unfair exploitation of its economy by the Saleh government in the North, where the capital Sanaa is located. Saleh’s crackdown on protesters in the South strengthened calls for secession from leaders in the region.

When Saleh was deposed in 2012, the national dialogue process that followed had promised to heal these old wounds. Hadi was himself from the South, and therefore raised hopes among fellow southerners. Yet, despite protracted negotiations, the talks could not produce an agreement on the political status of the South: several popular southern leaders boycotted the negotiations and campaigned for secession, and while the dialogue finally agreed on a federal structure with greater autonomy for the South, it was unable to work out the details of the devolution of power.

The breakdown of the transition government—and the takeover of Sanaa by rebels, increasingly controlled by Saleh—only tested the South’s patience further. Now, with Hadi away in Riyadh, reports suggest that secessionist leaders have once again come to dominate the South’s political landscape, with no compromise in sight. Even in Aden today, the transition agreement seems all but dead, with the local governor and police chief calling the shots, as the Houthis make inroads. As one southerner was quoted as saying, “Hadi has already brought the Houthis to Aden, and then brought al-Qaeda, so we are not stupid to trust him anymore.”

In the midst of all this, the international community is struggling to salvage the irreparably crippled Hadi government—despite most public opinion across the country now seeming to be against him. Saudi forces have been bombing rebel holdings in the North, causing widespread collateral damage but doing nothing to strengthen the transitional government. United Nations resolutions have placed embargoes on the Houthi rebels, and repeatedly called for the complete implementation of the transition agreement that put Hadi in charge.

But the Iranians also seem determined not to let the Saudi-sponsored agreement see the light of day. In recent months, they have stepped up weapons support to the Houthi rebels, turning the Yemeni battlefield into the latest theater in the Middle East’s own Cold War. With Hadi away in exile and his government being overwhelmed by secessionists in Aden, it seems inconceivable at this point that the Iranians would lose this battle to the Saudis.

With all this chaos in the background, America’s war against Al Qaeda and ISIS is under threat. On the one hand, Washington wants to preserve its alliance with the Gulf states, who are fighting to save their irretrievably lost transition agreement. As a former U.S. Defense Department official pointed out in the Atlantic recently, when Saudi Arabia’s Prince Mohammed visited the United States last month, the red carpet was well and truly rolled out.

Yet, on the other hand, Washington can’t afford to let Yemen’s chaos prolong indefinitely, lest ISIS militants cash in on the instability and lawlessness, just as they lose territory in Syria. In August of last year, a UN report said that both Al Qaeda and ISIS have already begun to gain a foothold in the southern and eastern parts of the country.

The challenge for Trump would be in reconciling his Saudi alliance with the fact that the Saudi-backed Hadi government is no longer in a position to rule. Backing the aimless Saudi operation—whether verbally or militarily—will only make Iranian interests in the country more deeply entrenched, and the conflict unending. If Trump wants to get rid of militants in Yemen, he’s going to have to find a way to bring the Middle East’s Cold War rivals to agree on a government.

Mohamed Zeeshan is a scholar of international affairs at Columbia University and online editor of the Columbia Journal of International Affairs. He has written for The Diplomat, India Today and HuffPost India.

Image: Villagers scour rubble for belongings scattered during the bombing of Hajar Aukaish, Yemen, in April 2015. Wikimedia Commons/Voice of America