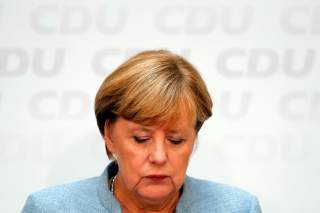 In Sunday’s national elections in Germany, Angela Merkel presided over a major political failure for her party and her country. Yes, Merkel will remain chancellor for a fourth term, probably in a fragile three-party coalition. However, a historic mission of her Christian Democratic Union (CDU) has been to prevent the emergence of a viable political party on the far right at the national level. Chancellors and CDU leaders from Konrad Adenauer through Helmut Kohl understood this mission and fulfilled it. Merkel has failed, largely due to her pursuit of an ever-larger political center through coopting leftist policies and programs. She thus left ample space on the right for the new Alternative for Germany (AfD) which gained 13 percent of the vote on Sunday.

The voting results were clear cut. The CDU, its Bavarian sister party the CSU and the Social Democrats (SPD) were the big losers, while the AfD and the Free Democrats (FDP) were the big winners. The Greens and Left Party remained pretty steady at about 9 percent each. Additionally, 4 percent more voters participated than in the previous national election in 2013.

By far the biggest loser was Merkel’s CDU/CSU, which dropped 8.7 percent from 2013. Much of this voting hemorrhage was due to the catastrophic performance of the CSU in Bavaria, its worst since the founding of the Federal Republic in 1949. Bavaria had not had a recent state election to test the strength of the AfD, which has entered the legislatures in thirteen of the sixteen states. Now we know that the AfD has great strength in Bavaria, to the extent it dragged down the Union (CDU plus CSU) to one of its worst electoral outcomes. There is a parallel with the recent electoral failure of the British Conservative party, which left Prime Minister Theresa May in office but dependent on distant political allies in Northern Ireland. Merkel will be in a similar situation if she creates a three-party coalition with the FDP and Greens.

Merkel and CSU leader Horst Seehofer, though political allies, have been at daggers drawn for some time, often quite publicly. While Merkel may take some personal gratification from Seehofer’s electoral humiliation, it will be cold comfort as she now leads a seriously weakened Union in negotiations to form a governing coalition, especially as the Free Democrats remember how she essentially shoved them overboard as political allies four years ago.

The huge losses of the CSU in Bavaria made election day an unalloyed triumph for the AfD. Not only did this comparative newcomer to German politics get into the federal legislature, the Bundestag—by obtaining more than the required 5 percent of the vote—it did so with a resounding 13 percent, a dramatic achievement in German political history. The AfD began as a small coalition of academics and economists who opposed Merkel’s financial policies within the European Union. They chose the name “Alternative for Germany” in response to Merkel’s habit of declaring about her policy choices that “there is no alternative.” They wished to demonstrate otherwise.

The AfD was later swamped by xenophobic elements reacting to Merkel’s open-door policy toward migrants which saw the party as the most convenient vehicle for expression of their concerns. It achieved a series of electoral successes at the state level, culminating in Sunday’s national triumph. The AfD is now ranked ahead of the FDP, Greens and Left parties in the Bundestag and only 7 percent behind the once-mighty (and once-governing) SPD. The AfD is now a political force to be reckoned with in Germany at every level. While their attraction is distinctly greater in the east (the former German Democratic Republic) than in the west, their victory on Sunday in Bavaria demonstrates that the AfD is more of a national political force than the east-based Left Party.

Election day was also shattering for the SPD, the standard bearer of social democracy in Europe since the nineteenth century. Their electoral performance was their weakest in postwar Germany and must be especially bitter for party members who only months ago hoped that the party had finally (after many attempts) found a leader who could win a national election. However, Martin Schulz proved to be an electoral fizzle who could not adjust successfully to the German political scene after many years in Brussels. Although personally empathetic to many SPD voters, he lacked charisma and a coherent message. For over a decade, the SPD has been plagued by the tendency of many natural SPD voters to stay at home rather than vote for a party they feel has lost its identity and purpose. After gaining a dismal 20.4 percent of the vote (a loss of 5.3 percent), Schulz announced his party would go into opposition rather than forming yet another Grand Coalition under Merkel’s leadership—a step the SPD should have taken four years ago.

There was one piece of good news from the election, which was the return of the centrist Free Democrats to the Bundestag. The FDP fell below the 5 percent threshold four years ago for the first time and risked political oblivion. Fortunately, it recovered and its new leadership understood that attracting younger German voters is not just about branding but is about principles. The FDP stands for civil liberties and free markets; in American terms it might be characterized as Eisenhower Democrats. After performing reasonably well in a number of state elections, the FDP turned in a convincing victory on Sunday with 10.7 percent of the vote—an increase of almost 6 percent. The FDP will likely be the middle party in a so-called “Jamaica coalition” (based on the colors of the parties and of the flag of that country) between the CDU and Greens. Unlike a Grand Coalition with the SPD, a Jamaica coalition will tilt somewhat more to the right, although the internally-fragmented Greens may often be disruptive.

The AfD is still fairly weak compared with right-wing counterparts in France, the Netherlands, Poland, Hungary and elsewhere in Europe. Obviously, for historical and contemporary reasons, Germany is different. German elites essentially promised Europe that an AfD would not happen. Now that it has, the obvious question is how much further it can go. A glance at the more successful far right in Austria demonstrates that Merkel’s political failure needs correction. Sunday’s election took place in a country with low unemployment, low inflation, high living standards and generous social welfare. Merkel’s campaign theme was contentment. It failed. The consequences of Merkel’s migrant policy—poorly thought through but implemented without meaningful consultation with German state governments or with other EU leaders—came home to roost on Sunday. Germany is not a migrant-friendly society for non-Europeans. Only a hour’s drive west from the multicultural atmosphere of Kreuzberg in central Berlin, the AfD won a quarter of the vote.

Merkel’s pretense as the new leader of “the West” is seriously tarnished by her failure to obtain an electoral mandate. It is striking that both the CDU and SPD suffered major losses on Sunday. Together these two “governing parties” of Germany won 53 percent of the vote. The inability of Schulz to energize voters gave nothing—absolutely nothing—to Merkel. The AfD gained most of its votes from traditional supporters of the CDU/CSU. The new German governing coalition (assuming it can be formed at all, which could require months of negotiations) will lack the cohesion and credibility of the Grand Coalitions of recent years. A German chancellor can no longer speak with an authoritative voice for Germany, let alone for Europe and still less for “the West.” It is not out of the question that the locus of leadership in Europe may shift back to Paris, if there is to be a locus at all.

In the past year, many Germans have spoken with naked schadenfreude about political democracy in America, contrasting the theatricality and inconsistencies of the Trump administration with their own supposedly more “mature” European democracy. Now, the resilience of German politics faces the test of a democratically legitimate vehicle for popular frustrations on the right which have been submerged since the War by prudence and prosperity. The Bonn Republic endured a similar challenge from the radical left in the sixties and seventies, but it was an anxious period. The German constitutional system contains elements of what is called “vigilant democracy,” the idea that German democratic institutions are fragile and must be protected from popular extremes to guarantee the peace of Europe. Some German politicians have argued that their democracy is now sufficiently matured and tested that Germany should be considered a “normal country.” With the emergence of the Alternative for Germany at the national level, Germany’s neighbors may want more time to award that label. To be fair, many Germans will feel the same.