On the Anniversary of Tiananmen Square, What Is Xi Jinping Thinking? 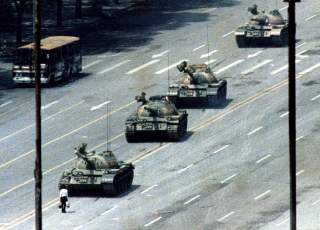 What Is Xi Thinking Today? Probably That He Can’t Erase Tiananmen Fast Enough.

The most revealing passage from Xi’s speech though concerns an astute observation of the past. He asks the reader:

Why did the Soviet Union disintegrate? Why did the Communist Party of the Soviet Union fall to pieces? An important reason is that in the ideological domain, competition is fierce! To completely repudiate the historical experience of the Soviet Union, to repudiate the history of the CPSU, to repudiate Lenin, to repudiate Stalin was to wreck chaos in Soviet ideology and engage in historical nihilism. It caused Party organizations at all levels to have barely any function whatsoever. It robbed the Party of its leadership of the military. In the end the CPSU—as great a Party as it was—scattered like a flock of frightened beasts! The Soviet Union—as great a country as it was—shattered into a dozen pieces. This is a lesson from the past! (emphasis mine)

The way Xi sees it, a repudiation of the Party’s history would bring about the end of the CCP’s rule over China. In order to prevent that, the Party must take special care in handling its own past and ensuring that its cadres remain loyal to perpetuating both the Party and its ideology. Incidents such as Tiananmen Square must not only be forgotten, but, if necessary, justified as a painful but necessary step in the advance forwards towards true communism (that is to say, utopian national prosperity and triumph). Unlike contemporary Western leaders, who seemingly still believe that they are living in a post-ideological world where liberal democracy is the final answer, Xi knows that he has a fight on his hands. Ideological competition is indeed fierce, and he and the system he holds domain over will not be truly safe so long as there exists a viable alternative.

Understanding all this means that remembering Tiananmen Square takes on new meaning. In the words of Lousia Lam’s The People’s Republic of Amnesia, “A single act of public remembrance might expose the frailty of the state’s carefully constructed edifice of accepted history, scaffolded in place over a generation and kept aloft by a brittle structure of strict censorship, blatant falsehood and wilful forgetting.”

This anniversary is an opportunity. For political leaders, foreign policy experts and those who dedicate themselves towards advocating for democracy, it is a chance to realize that while the liberal democratic virtues they advocate might, in a sense, be universal, they need to be defended, renewed, and sometimes, fought for. They cannot be taken for granted. For when the American Founding Fathers, in their wisdom, wrote that memorable line about “Life, Liberty, and the Pursuit of Happiness” in the U.S. Declaration of Independence, they followed it up with another, equally as important line:

That to secure these Rights, Governments are instituted among Men, deriving their just Powers from the Consent of the Governed, that whenever any Form of Government becomes destructive of these Ends it is the Right of the People to alter or to abolish it, and to institute new Government, laying its Foundation on such Principles, and organizing its Powers in such Form, as to them shall seem most likely to effect their Safety and Happiness.

Carlos Roa is the senior editor at the National Interest.