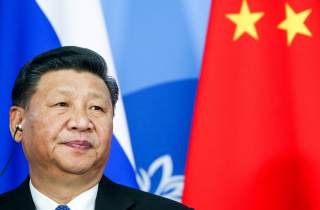 XI JINPING is determined to take China into a new era that sets his country and the United States apart from other powers and avoids conflict between the two. The widespread view found in the works of, among others, Henry Kissinger, Graham Allison at Harvard University and John J. Mearsheimer at Chicago University is that U.S.-China relations are ripe for conflict and war. Their assumptions are based on analogies of great power conflict and power transitions under previous multipolar systems, such as prior to World War I. However, the United States and China are not rivals in a multipolar system. International politics has entered a new era in which the United States and China are the two lone superpowers in a bipolar system. China has risen to top-ranking status, and the both nations are much more powerful than any third state. Instead of comparing U.S.-China relations to great power rivalry in the past, the question we should ask is somewhat different: whether the superpower rivalry between the United States and China in the first half of the twenty-first century will resemble the stability that characterized the U.S.-Soviet Union superpower rivalry in the second half of the twentieth century.

With the return of bipolarity, we might expect another period of what historian John Lewis Gaddis termed “the long peace” of the previous bipolar system between the United States and Soviet Union. Political scientists have argued that a bipolar system of two is more stable than a multipolar system of three or more, but no one has examined the relative stability of bipolar systems. While it is important whether the international system is bipolar or has some other structure, stability is heavily affected by geopolitics and how geography shapes the two superpowers and their relationship. Since the previous U.S.-Soviet bipolar system and the new U.S.-China bipolar system are concentrated on two different geographic regions, systemic effects differ. The likelihood of limited war and instability is higher in a new U.S.-China bipolar system in the twenty-first century compared to the old U.S.-Soviet Union bipolar system of the twentieth. Water barriers in East Asia may prevent a third world war between the superpowers, but since the rivalry between the United States and China is mainly at sea instead of on land in Europe, it makes a limited war for the control and access to sea-lanes in maritime East Asia more likely.

TWO FACTORS suggest that that the international system has returned to bipolarity. First, the power gap between the United States and China has narrowed considerably during the last two decades. China’s nominal GDP currently accounts for about 65 percent of that of the United States’ own GDP. This contrasts sharply with the early 1990s, when the U.S. nominal GDP was about fifteen times larger than China’s. Currently, U.S. military spending is about two to three times that of China’s. This differs from the year 2000, when the U.S. defense budget was more than ten times that of China’s, not to mention the early 1990s, when U.S. defense expenditure was more than twenty times higher. While China has not obtained power parity with the United States, the relative increase in China’s combined power places it in the top ranking with the United States, even if only barely. Similarly, the Soviet Union was never as powerful as the United States, but it was still regarded as a superpower and a pole in the old bipolar system.

Second, no other states match China’s power in the aggregate, and the top two states are now much more powerful than any third state. In 2018, according to the International Monetary Fund, China’s nominal GDP was about ten times larger than Russia’s and roughly five times larger than India’s. The Chinese economy is almost three times as large as Japan’s, more than three times as large as Germany’s, and more than four times as large as France’s and Great Britain’s. It is wrong to argue that the international system is multipolar when Russia has about one-tenth and India has about one-fifth of China’s nominal GDP while China has reached more than three-fifths of the U.S. nominal GDP.

The Stockholm International Peace Research Institute (SIPRI) estimated in 2017 that China’s and Russia’s defense spending amounted to $228 billion and $55 billion respectively. China’s defense budget is roughly four times India’s, Great Britain’s and France’s and almost six times larger than Germany’s and Japan’s, also estimated by SIPRI. The power gap between China and the power next in rank has become so large as to warrant the notion of a new bipolar system.

It was the decline in Great Britain’s relative power and the power gap between the Soviet Union and Great Britain that transformed the international system from multipolar to bipolar in the post-World War II period. In Hans J. Morgenthau’s second edition of Politics Among Nations, published in 1954, he added, concerning the decline of the relative power of Great Britain, that the United States and the Soviet Union, “in view of their enormous superiority over the power next in rank, deserved to be called superpowers.” This is an important but often underemphasized point in the current debate, which focuses on whether China’s combined capabilities are sufficient for top-ranking status but neglects to measure the power gap between China and the power next in rank. The contemporary distribution of power among states is roughly similar to the power distribution at the start of the previous bipolar era in 1950.

MOST SCHOLARS and commentators examine contemporary U.S.-China rivalry from a multipolar perspective. Kissinger argues that the emergence of China poses a comparable structural challenge in the twenty-first century as Germany’s emergence posed a challenge to the system in twentieth-century Europe. However, Germany rose within a multipolar system that allowed for instability and a balancing behavior through arms racing and alliances, which contributed to the outbreak of World War I. In contrast to the rigid alliance system that prior to World War I—which compelled Germany to support its ally, Austria-Hungary, and compelled France and Russia to mobilize their armies in support of each other—China and the United States are not pushed in similar ways to support their respective partner (Russia) and ally (Japan) today. The United States and China are much more powerful relative to any other states and are not dependent on any alliances. Just like the previous Cold War period, they can concentrate their efforts on internal balancing, which is more likely to foster stability.

China’s GDP and defense spending is roughly equal to the combined GDP and defense spending of all East Asian states, including Russia and India. Just so, the United States in the late 1940s was pushed to balance the Soviet Union since no other European powers could match its power. Stability and balancing differs under bipolar and multipolar systems, and the rise of China does not pose the same structural challenge today as Germany did in the past. This is often neglected in contemporary assessments of U.S.-China rivalry. Britain and Germany’s rivalry in a multipolar system led to two world wars, while the United States and Soviet Union’s intense confrontation sustained a cold war. The U.S.-China bipolar rivalry will have its own unique characteristics.

In Graham Allison’s most recent book, Destined for War, we are told that war between the United States and China in the decades ahead is not just possible, but much more likely than recognized at the moment, even if it is not inevitable. The conclusion draws on his examination of great power transitions over the past five hundred years, which shows that in twelve of sixteen cases the result was war. However, the cases that led to war were within multipolar systems, and Allison does not take into account the bipolar-stability thesis. In Allison’s dataset, the U.S.-Soviet case during the previous bipolar system did not end in war, which might suggest that the United States and China are destined for another “long peace,” not war.

THE RETURN of bipolarity matters if we want to gauge the possibility of war between the United States and China over the course of the twenty-first century. When we, for the first time, can compare the stability of two bipolar systems, we find variations primarily because of the geopolitical differences between a bipolar system concentrated on East Asia rather than Europe and with superpower rivalry concentrated more on the maritime domain than on land.