Another Reason to Support the Trans-Pacific Partnership 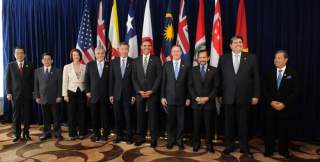 In Washington, it seems that there is rarely an opportunity to pursue a singular policy that strengthens U.S. relations with multiple regions. With constraints on budgets and the inboxes of policymakers, it often seems that attention and resources for one region come at the expense of another. While that is often the case, the Trans-Pacific Partnership (TPP) is a vital chance for policymakers to strengthen relationships with partners in two key regions.

In the debate over the TPP and the necessary presidential Trade Promotion Authority (TPA)—more commonly referred to as “Fast Track”—much of the political discussion has been focused on how the trade agreement would set the standard for much of the trade with Asian partners, and how the trade agreement is seen as the economic pillar of the Obama administration’s “pivot” towards the Asia-Pacific. While this is an important aspect of this trade agreement, it is vital for policymakers to understand how the TPP also better integrates the United States with key trading partners in the Western Hemisphere—and sets the stage for further integration of the hemisphere’s economies.

With the participation of Canada, Mexico, Peru, and Chile—and, of course, the United States—five of the twelve countries negotiating the TPP are in the Western Hemisphere, and Colombia has also signaled its interest in joining a potential trade deal, bringing the total to six. In these nations, the United States already has a strong network of trading partners, with all of these nations participating in either multilateral or bilateral trade agreements with the United States.

Furthermore, these regional trade partners have sought to strengthen their economies through reforms that open their economies to investment and trade, combat the scourge of crime and corruption, and promote the rule of law. At a time when there has been a narrative of stagnation in Latin American economies, these nations have bucked that trend through a bold willingness to integrate themselves into the global economy. Existing trade blocs such as the Pacific Alliance, which accounts for approximately 35 percent of Latin America’s total GDP and 55 percent of the region’s exports, reflects the positive impact economic reforms have had on many of these countries as they strive to become more globally competitive.

While these nations do continue to face challenges, their successes stand in stark contrast to the political violence in Venezuela and the economic failures of Argentina. Their example also demonstrates that Latin America is not consigned to a future of low-wage manufacturing or the extraction of commodities for other markets.

With a long history of working with the United States on trade issues, there are no better partners than the nations of the Western Hemisphere to participate in the TPP process to ensure that fair and equitable rules are set for trade, and that the future of the Western Hemisphere is one of greater integration and cooperation into the global economy—thus countering the narrative of the decline in American leadership, both regionally and globally.

In doing so, we can emphasize the greater opportunities for U.S. businesses and workers that can come from better integration of regional supply chains, the “nearshoring” of manufacturing back to the Western Hemisphere, and the integration of energy markets. The demand for increased trade with nearby partners would also require improvements to infrastructure in the United States, with ports, roads, railways, and pipelines needed to carry goods to and from these regional partners.

Finally, the experience the United States has had working with these nations as trade partners has underscored the importance of coupling access to trade with emphases on improving education, skills, and human capital. Too often, when people decry trade and its perceived drawbacks, they are using trade as an excuse for structural failures in our education system and workforce skills development. The TPP process can build on the lessons learned from NAFTA and other regional trade agreements to ensure that American workers and their products and services have the tools needed to compete in the global marketplace.

As leaders with experience in the region, we understand the political and economic importance of TPP to U.S. relations in the region, and the benefits of further integration with our neighbors. In moving forward with the TPP process, the United States can embrace a rare win-win opportunity for two vital regions.