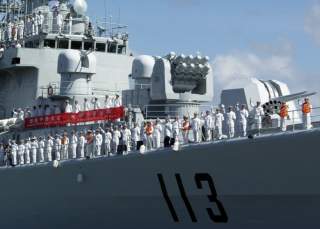 The 7th Round of the U.S.-China Strategic and Economic Dialogue (S&ED) concluded last month. Once again, the work of hundreds of senior officials and dozens of agencies produced a mountain of literature. China watchers are still parsing the 127 outcomes of the Strategic Track, but one important change seems to have slipped through the cracks. Unlike last year, the factsheet contains no reference to a “new model of U.S.-China military-to-military relations,” an offshoot of President Xi Jinping’s signature foreign policy concept, the “new type of great power relations (NTGPR).” In fact, a careful reading of recent Pentagon speeches and reports confirms this is no accidental omission. Despite some recent progress in areas of practical cooperation like the signing of an Army-to-Army Dialogue Mechanism Framework, Secretary Ashton Carter has systematically purged the term from the Defense Department’s engagement rhetoric. Exasperated with Beijing’s maritime assertiveness and cyber activities, views of China within the Pentagon—and Washington in general—are unmistakably hardening. Observers on both sides of the Pacific should take note of this latest sign of deepening strategic mistrust.

First introduced by then-Vice President Xi during a state visit in 2012, the NTGPR framework has since come to dominate Chinese public diplomacy towards the United States. Like the “China Dream” and “One Belt, One Road,” the “new model” of Sino-American relations occupies an important ideological space for the Party’s 5th generation leadership and is closely tied to Xi’s personal prestige. A big push for the United States to agree to the concept came in 2013, when President Obama pledged to foster “a new model of cooperation” at the informal Sunnylands summit. Despite U.S. concerns that the NTGPR’s calls for “no conflict, no confrontation, mutual respect, and win-win cooperation” might mean accommodating Chinese hegemony in Asia, the phrase quickly gained currency in other high-profile exchanges. At the 5th S&ED later that year, the two sides agreed to build “a new model of relations between the United States and China,” and Deputy Secretary of State William Burns spoke of “major powers looking to forge a new model of relations.” When the 6th S&ED was held in Beijing, senior Chinese officials invoked the NTGPR in nearly all of their public remarks. Secretary of State John Kerry was particularly eager to reciprocate, using the phrase more than half a dozen times. For the first (and last) time, the Strategic Track fact sheet at the 2014 meeting also committed the two nations to work towards “the development of a new model of U.S.-China military-to-military relations.”

Like the parent concept itself, it has never been clear what China exactly wants out of the new military to military (mil-to-mil) model. During an April 2013 visit by Joint Chiefs of Staff (JSC) Chairman General Martin Dempsey, PLA Deputy Chief of General Staff General Fang Fenghui called for “a new kind of military-to-military relationship...consistent with the state-to-state relationship.” At Sunnylands, Xi suggested the two sides “positively construct a new pattern of military relations compatible with the new pattern of relationship between the two great powers.” Under Defense Secretary Chuck Hagel, the Pentagon seems to have endorsed the proposal. Hagel took pains to jointly unveil the framework with his Chinese counterparts during his April 2014 trip to Beijing. Matching the language of the PLA participant at the following month’s Shangri-La Dialogue, Hagel again ordered the Pentagon to forge ahead on the new model, and the concept featured very prominently in the 2014 Department of Defense (DOD) annual report to Congress on China. When the U.S. and China agreed to two important confidence building mechanisms last November, the text of both agreements contextualized this progress within the “development of a new model of U.S.-China military-to-military relations.”

The administration was willing to pay homage to the NTGPR in 2013 and 2014 for two reasons. First, Washington wanted to throw Beijing a bone. In Hagel’s own words, by embracing the language of the new model the United States was “reaching out to China.” Every American president since Richard Nixon has coupled security hedging with an engagement strategy in its approach to China, and Obama is no different. The United States also probably appreciated that rather than keep the slogan of “a shared commitment to build a positive, cooperative, and comprehensive relationship” agreed upon by Obama and his predecessor Hu Jintao, the new Chinese president wanted his own formulation for the U.S.-China relationship. Offering recognition for Xi’s proposal would go a long way towards securing his goodwill.

Second, the United States hoped to redefine the concept to fit its own vision for the region and shape China’s policy choices. After all, on paper the NTGPR was compatible with the power transition problem former Secretary of State Hillary Clinton posed in 2012, when she said the two countries must “write a new answer to the age-old question of what happens when an established power and a rising power meet.” The 5th and 6th S&ED dialogues both saw U.S. policymakers playing ball. As the bilateral relationship became more troublesome, Secretary Kerry emphasized the NTGPR “is not going to be defined by us carving up areas and suggesting there are spheres of influences...It means working within the rules-based system.” National Security Council (NSC) Asia director Evan Medeiros further insisted in March 2014 that for the NTGPR to work, “we need to focus less on core interests and… more on common interests.” For the military-to-military relationship, Hagel outlined his understanding of the new model at the PLA National Defense University as “sustained and substantive dialogue,” “concrete, practical cooperation where our interests converge,” and “manag[ing] competition and differences.” With some exceptions, American officials have avoided using the modifier “great power/major country,” which evokes fears about a U.S.-China G2, especially in Japan.

However, as provocative incidents and near-crises like China’s unilateral declaration of an East China Sea Air Defense Identification Zone, 2014 oil rig standoff with Vietnam, and massive land reclamation in the South China Sea have multiplied, the mood in Washington has swung hard against pandering to the Chinese leadership. Last month’s S&ED saw sharp disagreements in the strategic track and the joint civilian-military Strategic Security Dialogue, especially over cyber hacking and the South China Sea. Long rumored to be under consideration, the Pentagon under Secretary Carter is finally putting into practice new tactics to deter Chinese “gray zone” coercion. One of Admiral Harry Harris’s first orders of business after replacing the more circumspect Samuel Locklear as PACOM chief this year was to call Beijing’s maritime claims “preposterous.” DOD has also been pressing for direct Japanese military involvement in the South China Sea, with positive results. Importantly, Obama neglected to cite the NTGPR when he and Xi announced the two confidence building mechanisms in November. For the United States, the question has always been how to “operationalize” the new model, and lately the administration seems to have decided the game is not worth the candle.

The choice to scrub any allusion to a new model of military-to-military relations from the S&ED is just one data point in this broader trend. With over a dozen references to the NTGPR in speeches and op-eds published in U.S. newspapers, the Chinese side privately pressed hard for its inclusion. All they got was a single mention of “a new model” in this year’s factsheet. No U.S. official used the phrase publicly. Meeting on the sidelines of the talks with PLA Deputy Chief of General Staff Admiral Sun Jianguo, Deputy Secretary of Defense Robert Work reportedly made “positive remarks” on the mil-to-mil relationship but also, more tellingly, engaged in “an explicit exchange of views.” In contrast to Hagel’s 2014 visit, American officials made no reference to a new type of military-to-military relationship when they hosted Chinese Central Military Commission (CMC) Vice Chairman General Fan Changlong at the Pentagon in June. Secretary Carter stressed only his commitment to “a sustained and substantive U.S.-China military-to-military relationship based on a shared desire to deepen practical, concrete cooperation in areas of mutual interest.” Although a Chinese Ministry of National Defense spokesperson cited the Army-to-Army Dialogue Mechanism as evidence of progress towards the new model, it remains to be seen whether the text itself includes the term. The language of this year’s China Power Report’s “Strategy for Engagement” section is conspicuous in being nearly identical to the 2014 edition—except for the elimination of the NTGPR.

As calls to take a harder line against China grow louder in Washington, expect the rhetoric coming out of the Pentagon to steer clear of any “new model of military-to-military relations.” Instead, Secretary Carter will likely focus on promoting cooperation where U.S. and Chinese interests overlap, expanding mechanisms to avoid accidents and enable communication in a crisis, and pressuring China to change its behavior where its actions are judged to be destabilizing and contrary to international laws and norms.

Bonnie S. Glaser is Senior Adviser for Asia and Director, Project on Chinese Power at the Center for Strategic and International Studies (CSIS).

Jake Douglas is a Research Assistant in the Japan Chair at CSIS.