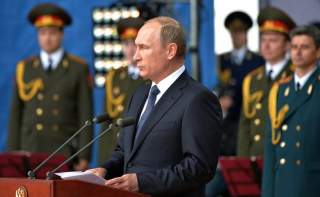 Decades of Cold War–era Soviet expansionism have conditioned Washington to recoil reflexively when Russia’s military strays outside its borders. Amid reports that Russia is expanding its military and intelligence role in Syria, President Obama had little choice but to meet with Russian president Putin on the margins of the United Nations General Assembly meetings in New York, but he made clear that the United States harbors deep reservations about Putin’s call for an “international coalition” to fight against ISIS. Before rejecting this call altogether, however, we should consider three important realities.

First, air power alone cannot defeat ISIS. Success requires ground operations. Who will supply the troops to destroy ISIS in Syria? The American public would rightly block sending U.S. ground forces, worried that we have already spent too much blood and treasure in the region. Plus, our entry would likely prove a rallying point for ISIS, which would relish the opportunity to fight Americans in Syria or Iraq.

The options look just as bleak within the region. Turkish president Recep Erdogan’s focus has been to topple Assad and hold Kurds at bay. His policy has failed. Support from Iran and Hezbollah has done little more than help Assad hang on to power. Kurds have proven effective in fighting ISIS, but Syrian Arabs are wary of Kurdish intrusion into their traditional turf. Iraqi forces have their hands full combatting ISIS inside Iraq. Other Arab nations have provided weapons and money, not troops.

The second reality is that ISIS poses at least as great a threat to Russian interests as to our own. The group’s proclamation of a caliphate aiming to rule Muslims across the world resonates strongly with Russia’s decades-long battle against jihadist separatism in its volatile North Caucasus. An estimated 1,700 of ISIS’ foreign fighters are Russian citizens, some of whom have reportedly returned to Russia to carry on the fight.

Moscow can ill afford to sit idly as ISIS captures territory in Syria, Iraq and beyond, assisting and inspiring Russia’s own jihadists. Russian foreign minister Lavrov has called ISIS the main threat to Russia today. Putin has shown that he will act decisively to defend Russia’s self-interests with or without U.S. consent. Would we prefer that he do this inside an international coalition or outside?

The third reality is that, even if we manage to defeat ISIS on the ground, Syria’s broader civil war—and the extremism it spawns—will continue absent a political settlement. Russia’s support for Assad and his fellow Alawites provides a means to nudge him toward compromise, as in the case of Putin’s success orchestrating a deal to remove Syria’s chemical weapons in 2013. The heart-wrenching refugee flow coming out of Syria makes harnessing that Russian leverage both a humanitarian and a strategic imperative.

Until 2011, neither the United States nor Israel felt that Assad posed a sufficient threat to warrant ousting him. What changed? Those demanding Assad’s removal point out his regime’s atrocities, which are indeed horrific. But moralizing about leaders we find distasteful is easy. Make no mistake: should Assad fall, it will be ISIS or the Al Qaeda–affiliated Al Nusra Front that seizes control in Damascus, not Jeffersonian moderates. The fact is, violent extremist seizure of power in Syria would threaten the security of both the United States and Russia more than some form of continued Alawite rule. Putin is prepared to prevent that outcome and he has the power to do so.

Would cooperation with Russia against ISIS undermine our ability to resist Moscow’s encroachments in Ukraine? That need not be true. Putin may believe that cooperation against ISIS would divert our attention and blunt our criticisms over Ukraine. But the United States is capable of competing in one area while cooperating in another. Aligning against ISIS would also send a strong message that we will work with Putin where it serves common interests yet strongly oppose his policies that undercut our own.

Putin’s long record of dealings with Washington make clear that he won’t do the United States any favors. But in advancing his country’s interests, he has shown that he will do whatever he thinks it takes. In combating ISIS, those interests in many ways parallel our own. We should not allow our ambivalence about Russia and its support for what we recognize as Assad’s murderous, thuggish regime in Syria to overshadow our urgent need to defeat a common enemy in ISIS.

James P. Farwell is a national security expert who has advised the U.S. SPECIAL OPERATIONS COMMAND. He is the author of Persuasion & Power (Washington: Georgetown University Press, 2012). George Beebe is a former chief of CIA’s Russia analysis who served on Vice President Cheney’s staff from 2002-2004. The views expressed are those of the individuals and do not represent those of the U.S. Government, its departments, agencies or COCOM.