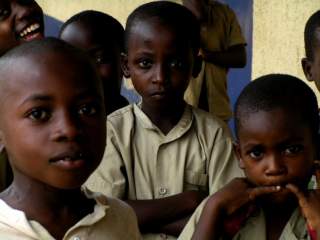 In one of the world’s poorest countries in east-central Africa, an entrenched Hutu president has upended his country’s constitution in order to run for reelection in next year’s election. To that end, he has taken to greater lengths of political repression, and is arming his ruling party’s youth militias with AK-47s in order to generate a climate of fear, all in a country suffering from overpopulation and a history of Hutu-Tutsi ethnic strife.

No, it’s not yet another commemoration of the twentieth anniversary of Rwanda’s genocide that, over the course of three months, brought the deaths of 800,000 mostly-Tutsi Rwandans, chiefly at the hands of a Hutu majority.

Instead, it’s a description of life today in Burundi, Rwanda’s southern neighbor. If global policy makers, twenty years on, have overlearned the lessons of Rwanda, they’ve ignored the lessons of Burundi, which suffered through its own, less notorious, civil war in the 1990s that took the lives of 300,000 Burundians, and ended only with the 2000 Arusha accords brokered by South African president Nelson Mandela.

Arusha established the framework for Burundi’s government, under which Pierre Nkurunziza was first elected president in 2005 and reelected in a flawed vote in 2010, boycotted by the country’s opposition. Nkurunziza’s governing National Council for the Defense of Democracy–Forces for the Defense of Democracy (CNDD-FDD) was founded in 1994, emerging as the most significant Hutu rebel force during the Burundian civil war and accordingly, the most powerful political party in postwar Burundi. The Arusha accords also established a Lebanon-style system for electing Burundi’s parliament. In the lower house, the national assembly, Tutsis are guaranteed forty seats (even though they constitute only around 15 percent of the population), while Hutus are guaranteed sixty (even though they constitute 85 percent). For now, that formula has kept interethnic strife at a minimum.

As the 2015 election approaches, however, Nkurunziza has steamrolled the post-Arusha constitutional consensus by pushing through an election law that could allow him to run for reelection, despite growing opposition. Last year, Nkurunziza introduced a tough new law restricting press freedom amid a wider crackdown on journalists. This year has brought even more restrictions on political assembly and casual gatherings, and the imprisonment of regime opponents after a clash between protesters and the police in the capital, Bujumbura. The leading opposition figure, Alexis Sinduhije, a Tutsi and former journalist who heads the cross-ethnic Movement for Solidarity and Development coalition, was arrested earlier this spring in Belgium after fleeing Burundi, though Belgian officials subsequently released him. The government has also persecuted members of the National Forces of Liberation (FNL), the last major Hutu rebel group to sign the Arusha accords (in 2008). Numerous reports that the CNDD-FDD is arming its youth militia, the Imbonerakure, were sufficient to cause significant concern within Burundi’s UN peacekeeping force earlier this year. That’s especially chilling in light of the role that similar Hutu youth militias, known as the Interahamwe, played in the 1994 Rwandan genocide.

While it would be alarmist to argue that Burundi stands on the brink of a Rwandan-style genocide, it would also be foolish not to acknowledge that the post-Arusha gains of the last decade will be increasingly at risk in the months ahead. Though the brewing political crisis in Burundi more closely resembles Kenya’s post-election violence in late 2007 than the Rwandan genocide in 1994, it’s hard to know just how far out of control Burundi could spiral if political violence severely destabilizes the fragile rule of law. Ominously, the largest Tutsi political party, the Union for National Progress (UPRONA), which had generally formed an alliance of convenience with the governing CNDD-FDD, left the government in February when Nkurunziza sacked his Tutsi vice president. UPRONA’s members are increasingly divided over Nkurunziza’s power grab, and clashes between police forces and UPRONA members are becoming more commonplace. If UPRONA’s leader, former president Pierre Buyoya, turns sharply against Nkurunziza as the 2015 election approaches, it could quickly introduce a truly ethnic component to the current political showdown.

Like Rwanda, Burundi is a relatively small, landlocked country that won its independence from Belgium in 1962. Also like Rwanda, Burundi’s post-colonial era featured Tutsi-Hutu tensions, in large part created through the divide-and-rule tactics of Belgian control.

With a population of just over 10 million, Burundi features one of the highest population densities in sub-Saharan Africa. The major difference is that Rwanda today has a GDP per capita of around $600 to $700, while Burundi’s GDP per capita is between $225 and $300. Though the two economies were roughly of equal size at independence, Rwanda’s economy today amounts to around $7 billion, Burundi’s around $2.5 billion. That’s partially due to the massive amounts of foreign investment and aid that Rwanda has received in the past two decades. Though Burundi’s budget relies in no small part on direct foreign assistance, it hasn’t had the same opportunities for investment as Rwanda. Burundi attracted about $600,000 in foreign direct investment in 2012, while Rwanda attracted about $160 million. That’s around 264 times as much as in Burundi.

To some degree, Rwanda has made its own luck, with President Paul Kagame’s economic management and reconciliation efforts winning fans from Davos to Beijing to Washington. Though Burundi hasn't benefitted from the same kind of economic boom as Rwanda, it has achieved steady GDP growth of between 3.5 percent and 5.5 percent since 2006. That’s not quite enough to keep up with Burundi’s population growth, and it’s far short of the kind of ‘peace dividend’ you might expect after the end of a decade-long civil war. Last year, coffee production dropped by 52 percent, not a good omen, considering that coffee is Burundi’s top export.

Burundi ranked dead last among the seventy-eight countries of the 2013 Global Hunger Index, 157th out of 177 countries in Transparency International’s 2012 Corruption Index, and 146th out of 148 in the World Economic Forum’s 2013-14 Global Competitiveness Index. In each case, Burundi falls far behind its four peers in the East African Community (Kenya, Tanzania, Uganda and Rwanda), and Burundi seems more isolated than ever. With Kagame’s decision to bring Rwanda into the British Commonwealth and to transform his country from a Francophone to an Anglophone country, Burundi is the only country left in the EAC that still uses French instead of English. If the French-speaking Democratic Republic of the Congo had any semblance of economic and political stability, Burundi might have more naturally turned toward Kinshasa, and not to Nairobi and Dodoma, for greater trade ties.

That doesn’t mean there aren’t promising areas of development. Incredibly, Burundians have known since the 1970s that their tiny country holds at least 6 percent of the world’s nickel reserves. So far, however, those mineral deposits have gone unexploited. Investment to develop Burundi’s industrial capacity and its ability to process nickel ore would be a game-changer. So would investment to improve Burundi’s road and rail infrastructure, allowing nickel (as well as coffee, bananas and other agricultural products) to more easily reach a major port, like Dar es Salaam in Tanzania. Moreover, for a country that’s still 90 percent rural, more efficient agricultural technologies could liberate a significant part of the population for more rigorous education and, ultimately, a more broad-based, services-heavy economy. With a median age of seventeen, Burundi is one of the ten ‘youngest’ countries in the world. Therefore, improvements in education could greatly benefit its youthful population and the country’s developmental future.

But none of this can happen under the penumbra of increasing political violence or the threat of further civil war, whether it’s Hutu-against-Tutsi or Hutu-against-Hutu. Though a surge of development might ameliorate some of the worst of Burundi’s political tensions, greater political stability is a prerequisite for attracting the investment that Burundi needs to fuel that growth. As in many of Africa’s struggling states, Burundi is trapped in a tragic “catch-22.”

In the meanwhile, the public sector and nongovernmental organizations should work with the private sector to build the kind of infrastructure that might truly rebuild Burundi’s economy. In the same way that global actors worked with Rwanda to buttress its journey from pariah to powerhouse, policy makers still have time to rescue Burundi from a not-so-benign global neglect.