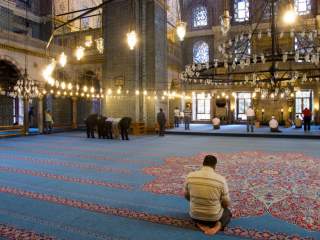 Islamic State’s losses on the ground in Syria and Iraq will have repercussions beyond the battlefield. The caliphate’s selling point as a viable alternative government with a triumphalist narrative is being undermined with each setback that the jihadist fighters face; they have already lost Fallujah, and the campaign to liberate Mosul from their grip is on the horizon. However, dealing a deathblow to the idea behind Islamic State will be impossible in the Arab world so long as the only alternatives to extremism are hollow state narratives. As ISIS compensates for its losses by implementing a new strategy that focuses on destabilizing Arab governments to boost recruitment, the time may be ripe for a new and comprehensive approach to political freedom, counter-radicalization and regime stability.

The dilemma regarding political freedom in the Arab world is one of tension between two competing responses to (and potential causes of) unrest: freedom and repression. On the one hand, with radicalism on the uptick, now seems as good a time as any for Arab regimes to double down on blanket repression in the Middle East. After all, the rise of ISIS in Syria did not originate in calls to jihad, but rather in calls for freedom and justice, and the extremists demonstrated their ability to simply ride upon the coattails of popular currents (of course aided by the brutality of a ruthless regime). On the other hand, it is impossible to fight the concepts behind radical groups like Islamic State without opening up the marketplace of ideas and allowing for some degree of nonviolent political change. In today’s Middle East, the lack of credible alternatives to the state-sponsored narrative, and inability to use nonviolent methods to achieve political change, have cleared the playing field for radical and violent ideologies.

The old cliché goes that in Egypt the government is not accountable to the people, but the people accountable to the government. The Arab Spring demonstrated that those living in Arab republics (and, to a lesser extent, the monarchies) view the state narrative with cynicism. However, even before the Arab Spring there were indications of cracks in the legitimacy of the state-controlled religious establishments. For example, despite the grand mufti of Saudi Arabia’s fatwa that the presence of foreign troops was allowed on Saudi Arabian territory during the first Gulf War, there was still a major backlash against it in Saudi public opinion known as the sahwa (“awakening”). Public anger was stoked by the unofficial preaching of more radical religious figures that circulated via cassette tapes. This was a clear sign that the Saudi religious establishment had lost the respect and fear of the populace as well the ability to control the information it consumes.

Capitalizing on the frustration of youth throughout the Arab world after the failure of the Arab Spring to deliver on its promise of change, ISIS appealed to Sunni Muslims with a narrative of victory and brutality that helped the jihadist organization draw in manpower beyond anyone’s expectations. ISIS created a sense of identification and emotional meaning among its supporters, and has succeeded in bringing young people from all over the world to the battlefields in Syria and Iraq. Tens of thousands of radicalized Muslim men and women from around the globe were inspired by Abu Bakr al-Baghdadi’s message and poured into the self-proclaimed caliphate.

The motivation of the group’s jihadist footsoldiers (or lack of concern for their own lives) meant that Islamic State could take on forces many times larger than it, and its successes snowballed. For example, in June 2014, despite being outnumbered by the Iraqi Security Forces by a factor of thirty, the jihadists took over Mosul in Iraq, looted hundreds of millions of dinars from its central bank, and captured billions of dollars’ worth of military supplies. This victory propelled ISIS forward by improving its arsenal, giving it the financial wherewithal to fund salaries four times higher than groups like Jabhat al-Nusra, and most importantly marked ISIS as a fearless and triumphant brand.

The failure of Islamic State to abide by its own slogan to “remain and expand” has serious ramifications for the group’s image. The triumphant stature disseminated throughout the Muslim world via new and traditional media is harder to sell to potential recruits while the group is in retreat. ISIS battlefield performance may already be affecting its internet presence, as its social media traffic has plunged over the past two years. For example, pro-ISIS Twitter accounts in 2014 had about five times as many followers as they do today. Likewise, the decline of the Islamic State is probably a contributing factor for the reduction new recruits to ten percent of the peak numbers (in addition to more extensive measures recently taken by Turkey and other countries to stem the flow of foreign fighters). As a result, there are reports that the group is so short on manpower that it is unable to consistently impose sharia in its territory, thereby neglecting a major aspect of its narrative and what allows it to classify itself as “Islamic.”

Because the situation in ISIS-held areas is in decline, the group has directed its focus outwards—launching more attacks on Arab states in order to breed the sort of hostility, resentment and insecurity that create fertile grounds for radical groups to take root. Terror attacks launched against Arab states aim to accomplish three major goals: maintaining relevance, increasing hostility and suspicion between the government and the populace (potentially alienating moderate Muslims), and fomenting unrest that could result in more ungoverned space. Islamic State sees destabilizing Arab states as a necessary component of its strategy to refill its ranks.

In response to this threat, we believe any solution should include the following three components.

First, Arab governments should stop using the fight against terrorism as an excuse to crush nonviolent legitimate voices that depart from the state narrative. These voices, which represent the Muslim world’s diversity of opinion and general disdain for extremism, will be more effective than the speeches of state-controlled imams or tweets from the U.S. State Department; they will speak the language of the younger generation and present credible alternative narratives that are able to compete with ISIS’s propaganda campaign for the Muslim world’s attention in the realm of new media. Authoritarian states may argue that seemingly innocuous calls for greater freedom are actually paving the way for radicalism, but this argument will not hold up, because the West would not push the governments to protect the free speech of Islamic State fanboys or calls for violence. Rather, by providing some outlet for political expression and an opening for nonviolent political activity, Arab governments would decrease the appeal of violent ideologies as the only solution for achieving political change.

Second, the West should incentivize rather than threaten Arab governments (except for perhaps the most egregious offenders) to expand political freedoms protected under the law by offering additional conditioned assistance to the state. Accepting such an offer would serve to increase the government’s legitimacy by improving the quality of life its citizens, as opposed to its traditional and increasingly unreliable methods of simply stifling dissent. For example, as a means to promote allocating resources more efficiently, the West could advise and support the implementation of targeted cash transfers in place of overly broad subsidies that are currently in place. The promise of economic aid packages and assistance in promoting practices consistent with good governance may not entice all regimes to get on board with increasing political freedoms, but any government concerned about long-term stability should be serious about regaining some degree of popular legitimacy based on serving the people’s interest.

Third, through collaboration between governments, donors and talented individuals from around the Arab world, a tech-incubator model to counter radicalization should be opened. Focusing regional efforts on counter-messaging Islamic State will create a collaborative program to help new ideas succeed by providing a workplace, seed funding, mentoring and training. Unlike previous efforts, the products will not be controlled by government sponsors and they will therefore not bear any government seal. This environment of disruptive innovation could also assist with regional connectivity and transparency by offering a secure and neutral space to cooperate. In the short term, some of the work can focus on developing counterterrorism technologies and counternarratives, while in the long term, it can aim to bring about change to the region with new technological tools and significantly reduce violent extremism. In order to prevent government sponsors from turning this into a base for more state-owned mouthpieces, governments will be forbidden from imposing an agenda; rather, the activities will emanate from the needs that the community articulates. From the ecosystem of grassroots initiative from innovators and entrepreneurs, the silent majority (or silenced majority) will emerge to speak out against terror with new technological breakthroughs.

True, the governments of the United States and UAE have already created the Sawab Center to counter terrorist propaganda, the recruitment of foreign fighters, and the intimidation and terrorizing of local populations. However, its results have thus far been lackluster, as is evident from the fact that many videos on the center’s YouTube page have views that number in the single digits. Future steps should take lessons from the center’s failures into account, including questioning the role to be played by the U.S. Department of State in this effort. Instead of seeking to articulate the U.S. government’s message, the campaign should seek power to empower future Arab generations to voice their opinions and beliefs on Twitter and Facebook, presenting a global solution to a problem that is not confined by international boundaries.