The Arab Spring Is Not Returning to Algeria and Morocco 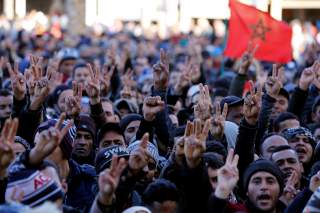 City square-choking protests in Algiers and smaller parades of protestors in Morocco’s capital of Rabat had led some foreign observers to conclude that a new “Arab Spring” will soon topple governments in Algeria and Morocco.

In reality, Algeria and Morocco are more different than their banal similarities—neighboring north African nations that were once ruled by French colonials, who practice Sufi or “moderate” forms of Islam—would suggest. These nations have made very different political choices over the more than half-century since colonialism ended, established different institutions and reacted to the dual crises of urban and rural unrest quite differently.

The current “revolution” in Algeria is a product of the first revolution in the 1960s and its immediate aftermath in 1962. The original revolutionary leaders, Ramdane Abane, Krim Belkacem, and many others, came from Algeria’s hot interior. They sought civilian control of the military and a focus on fighting rural poverty over foreign affairs. Once the French agreed to leave in 1962, the army went to work seizing power on behalf of urban and coastal tribes and other urban interests. The nomination of Ben Bella as Algeria’s first independent leader was the work of Houari Boumediene and Abdelaziz Bouteflika, under the name of the Border Army. Today’s demonstrators say it clearly in their signs and speeches: They want to be governed by democratic, elected civilians and a return to the original revolutionary vision that focused on jobs and development.

For a long time, Algeria was able to buy domestic peace by selling natural gas to Europe (eventually becoming one of its three largest suppliers) and using the funds to subsidize consumer goods, mainly fuel and food. With the collapse of gas prices in the 1980s, Algeria was forced to open politics to parties with no connections to the ruling clique. In the 1992 elections, the Islamists of the Islamic Salvation Front (FIS) clearly won. The army halted the vote-counting, igniting a ten-year civil war which left some 150,000 dead. In reality, the ruling junta was left with an impossible: embrace democracy and allow Iran-style radicals to seize power or put aside elections to wage a vicious civil war that proved to be far deadlier than the one waged by French forces in the 1950s and early 1960s. The civil war divided the country and left few people genuinely supportive of the army. When the “Arab spring” roiled nearby nations, Algeria remained largely unaffected due to massive repression and detailed memory of the army’s willingness to wage brutal war against civilians.

Now, in 2019, this wall of fear has finally fallen. Eventually, short-term desperation overwhelms long-term fears of punishment or death.

Protests were triggered by Bouteflika’s bid for a fifth term. The old leader is ailing and, reportedly, partly paralyzed. He has not attended a cabinet meeting since 2016. Everyone knew that he was no more than a mask for a clique, whose support lies mainly in the capital and handful of seaside cities. Meanwhile, more than 60 percent of the population in under forty years of age and many find it difficult to form families due to a jobs shortage.

But other objective reasons exist. From the early 1960s through the late 1980s, Algeria was able to use its hydrocarbon sales to subsidize the economy. Since then, Algeria used privatization as a cover for creating a cartelized, mafia-like economy. Decisionmakers soon demanded massive bribes to allow ordinary business transactions to occur. On his way out the door, Ahmed Ouyahia, Bouteflika’s last prime minister, paid off $75 million bank debt with a single payment from a businessman.

So, the insiders got much richer and the many, many outsiders stagnated.

Today, millions of Algerians demand the end of cronyism and corruption. They have noticed that the nations on the northern side of the Mediterranean have much less corruption and much more wealth—and that the benefits of development are much more evenly shared. What is possible in France, Spain and Italy, they say, should be possible in Algeria.

Clearly, events in Algeria matter to the whole region. But those who worry about the spread of contagion to Morocco do not consider the many differences in trajectory.

Unlike Algeria, Morocco experienced large-scale street demonstrations during the Arab Spring. This movement demanded reforms, not the departure of the regime. The answer was a new constitution in 2011 and elections which brought the Islamists to power in a coalition government. This succeeded because Morocco began liberalization and local elections, under King Mohammed VI. A clear democratic channel for social change had been opened, making violence and chaos relatively less desirable.

Second, the legitimacy of Moroccan king is not disputed. The monarchy is centuries old, traces its lineage to the Prophet Mohammed, and the king is demonstrably interested in solving social problems and hearing the plight of the poor. This does not mean that there is no social protest. Lack of water and public services, social justice, territorial equity, are frequent complaints by protestors. But this has nothing to do with the Algerian situation, which puts the legitimacy of the ruling FLN in question.

Together, Algeria and Morocco are essential for combatting terrorism, which emerges in their rural heartlands and too often kills in European capitals. Without an effective intelligence, military and police infrastructure in North Africa, fewer attacks would be thwarted, fewer terrorists arrested and more hearts and minds drawn to radical voices.

It is in this context that the positions on the Western Sahara issue must be revisited. Western Sahara is a long simmering territorial dispute between Algeria and Morocco, in which the former claims lands that make up a large swathe of southern Morocco. Algeria has financed separatist movements in the disputed lands since the 1970s and houses a one-party dictatorship of rebels near its desert outpost of Tindouf. The United States must support a political solution which ends the territorial claims, allows the rebels to receive amnesty in Morocco, and allows for economic growth across the Sahara.

If we do nothing, then the turbulence of the Sahel will reach the Western world.