Are Chinese Arms About to Flood Into Iran? 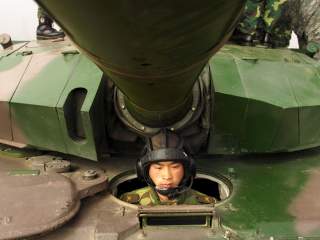 China is often regarded as one of the prime beneficiaries of the Iran nuclear deal, signed in July 2015 with the P5+1 countries. Under the deal, Iran will limit its uranium enrichment and make other changes to its nuclear program in exchange for the termination of sanctions. This potential opening could provide Chinese state-owned energy companies a chance to increase their involvement with Iran’s oil and natural gas industries, and Iran could become a more important export market for a range of Chinese products. Beijing may also assist Tehran in building infrastructure as part of the massive Eurasian development project known as “One Belt, One Road,” as well as offer financing through the China-led Asian Infrastructure Investment Bank. Many agreements are likely to be announced during Chinese president Xi Jinping’s inaugural visit to Iran, planned for late January.

A more worrisome, but overlooked, aspect of China’s growing ties with Iran could occur in the arms sector. A bit of historical context is needed here. In the 1980s and early 1990s, China was a major supplier of advanced weapons to Iran in areas ranging from tanks and fighter jets to fast-attack patrol craft and anti-ship missiles. Beijing was driven not only by profit motivations, but also, it seems, by a strategic desire to strengthen Iran as a bulwark against excessive U.S. influence in the Middle East.

Chinese arms sales to Iran gradually declined in the late 1990s and 2000s, due to pressure from the United States and the imposition of UN sanctions against Iran. Those sanctions initially prohibited involvement with Iran’s nuclear and ballistic missile industries, and were later expanded to cover major conventional weapons, such as combat aircraft and warships. Iran was also increasingly seen as a ‘pariah state,’ a status symbolized by the UN embargo, which discouraged China from maintaining overly close security ties with Tehran. Consequently, China’s arms relationship with Iran has been left largely moribund in the past decade.

The Iran nuclear deal could spawn a resurgence of Chinese arms exports to Iran by lifting UN sanctions and helping diminish Iran’s ‘pariah state’ status. China, and other states, would be allowed to export major conventional weapons to Iran in the next eight years with UN Security Council approval. After eight years, even those restrictions would be lifted, assuming Iran complies with the agreement. In addition, certain types of weapons could be sold to Iran without a waiver. For instance, Russia has argued that its sale of S-300 missile defenses to Iran are permissible because this system is not specifically prohibited under the nuclear deal. China could make a similar argument regarding small arms, short-range missiles and other systems.

In the coming years, China might attempt to sell a wide variety of advanced arms to Iran. These could include J-10 fighters, the possible sale of which has been reported in Chinese media. Another system would be the Houbei-class high-speed missile boat, which China is also poised to sell to Pakistan. This would be a logical choice given the expanding navy-to-navy relationship between China and Iran. China might also transfer advanced cruise missiles and technical know-how, allowing Iran to improve its domestic cruise missile program. Other systems could include UAVs, space and counter-space weapons, missile defense components and electronic warfare systems. Sales of most of these items would likely require UN approval, which China might attempt to secure as a permanent member of the Security Council.

The implications of enhanced Sino-Iranian arms cooperation for the United States and regional security could be significant. Provision of high-speed missile boats, anti-ship missiles, and other systems would allow Iran to strengthen its “anti-access/area-denial” (A2/AD) capabilities—referring to the ability to hold U.S. forces at bay in the event of a crisis. Indeed, China would be in an excellent position to assist Iran in enhancing its A2/AD capabilities since Beijing has been developing weapons of just this sort to counter U.S. intervention—notably in the context of a crisis in the Taiwan Strait.

For instance, Iran could use Chinese-supplied arms to increase the threat to U.S. naval ships in the Strait of Hormuz, a strategically vital channel for Gulf state oil exports to world markets. Iran might also use these weapons to conduct additional provocative exercises explicitly targeting U.S. forces in the region. In February 2015, Iranian forces destroyed a mock U.S. aircraft carrier using high-speed boats, shoulder-launched rockets, and cruise missiles. In December, Iran test-fired a missile within 1500 yards of the U.S. carrier Harry S. Truman, which was transiting the Strait of Hormuz. Chinese support could lead to a continuation or expansion of such destabilizing activities.

Chinese military assistance could also enable Iran to improve its long-range missile capabilities, which could endanger more distant U.S. military targets, such as U.S. facilities on the Indian Ocean island of Diego Garcia. China has pledged to adhere to Missile Technology Control Regime (MTCR) guidelines limiting transfer of components and technologies that can be used in long-range ballistic and cruise missiles, but its compliance with its commitments has sometimes been problematic.

Chinese arms exports to Iran could also pose proliferation concerns. For instance, as part of its effort to expand influence in the region, Iran could elect to re-export weapons to states such as Syria, where Tehran is militarily supporting the Assad regime. Iran may also transfer Chinese-made arms to terrorist groups such as Hezbollah in Lebanon, as well as to Shi’a militias in Iraq. These groups could in turn use Iran-supplied arms to strike military and civilian targets.

Of course, Chinese foreign ministry officials would likely push against a significant resumption of arms sales to Iran. Doing so would pose a challenge to China’s desire for positive relations with the United States. Major arms sales would also needlessly disrupt China’s relations with a variety of other states in the region that are on poor terms with Tehran, such as Saudi Arabia, Israel, and Turkey. Some Chinese firms may also be cautious about running afoul of U.S. sanctions, which will continue to target Iran on human rights and counter-terrorism grounds.

However, the People’s Liberation Army and Chinese arms manufacturers may lobby in favor of renewed arms exports to Iran. As in the past, some Chinese military strategists could portray arms sales as a way to counter U.S. ‘hegemony’ in the Middle East and build a more multi-polar world order. For their part, Chinese arms traders could seek to retain their competitive advantage by exploiting an important new market. Ultimately, it would be up to China’s top leaders, including President Xi Jinping, to arbitrate between these different perspectives and decide whether and how to re-engage Iran in the arms sector.

The United States can take steps to mitigate the risks of a resurgence of Sino-Iranian arms cooperation. Washington should work with Britain, France, and other partners in the UN Security Council to deny waivers for sales of major conventional weapons to Iran. Continuing U.S. sanctions on Iran should also be vigorously enforced, as should potential new sanctions on Iran’s ballistic missile program. U.S. officials should also press their Chinese counterparts to avoid selling the most advanced systems to Iran and to adhere strictly to MTCR limits on missile technology exports. The argument should be that greatly improved military capabilities could allow Tehran to conduct a more brazen and bellicose foreign policy. This would undermine China’s enduring need for stability in a region from which it continues to receive over half of its oil supply. Thus, Beijing’s restraint on arms sales would not only avoid tensions with Washington and many others, including Riyadh and Tel Aviv, but would also fundamentally support China’s own strategic interests.