Are Greece and Turkey Locked in a Mediterranean Forever War? 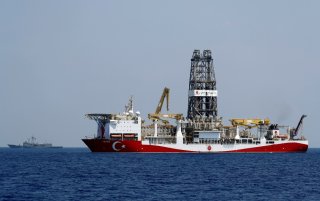 In recent months, Ankara has taken steps to re-establish ties with Israel, putting its goodwill on display during Israeli president Yitzhak Herzog’s visit to Ankara’s presidential palace in March. Turkey, which imports nearly all of the 50 bcm of its annual gas consumption, sees itself as a natural hub for energy exports to Europe and is making moves to make amends. Last month, Turkey and Israel carried out joint intelligence operations in Istanbul against Iranian threats to Israeli citizens there. In a video posted on his official Twitter account, then-Prime Minister Naftali Bennet said he would like to “especially thank President Erdogan and his people for their cooperation in thwarting attacks on Israelis in Turkey.”

Israel has fast-tracked to becoming a desired partner by both Ankara and Athens. In the area of security and intelligence-sharing, Turkey is a useful ally to Israel. The two states have a long history of strategic military cooperation, a series of mechanisms that worked until the Mavi Marmara incident in 2010, and shared interests in Syria and on the Iran file.

But Israel needs to see concrete steps by Turkey, namely restricting the maneuverability of Hamas operatives there. Policymakers in Ankara are realizing there is more to gain by regaining the trust of Israel than by harboring Hamas’ leadership in a symbolic bid to gain favor with the proverbial Arab street. But this has yet to translate into action.

Even as these countries gear up for election cycles, talks (still) remain the best option for managing the risk of violent confrontation in the eastern Mediterranean and facilitating a strategic energy solution. Considering ways to include Turkey in regional hydrocarbon development partnerships like the East Mediterranean Gas Forum would be a goodwill gesture that means all sides can save face and give Turkey a chance to prove its commitment to dialogue over saber-rattling. While there is reluctance to play ball with Turkey’s Erdogan among European leaders, a focus on outcomes should take precedent. Russia’s unjustifiable war on Ukraine has abruptly changed the energy forecast for Europe.

Turkey sees its maritime rights in the eastern Mediterranean as a matter of strategic national interest—this is true of the AKP as well as the main opposition parties. Even if a change in government should come to pass, this view is unlikely to change under a different ruling party.

With all four states—Greece, Cyprus, Israel, and Turkey—heading into a heated election year, preserving a fragile status quo may seem like the best bet. But simply containing the outbreak of future conflict is not a satisfactory long-term option. The focus should be on bold and creative solutions, even if they rattle convention. In an election cycle, the risk of a crisis is both ascendant and simultaneously too costly to bear.

Dr. Burcu Ozcelik is a Research Fellow at the Henry Jackson Society and an affiliated lecturer at the University of Cambridge, where she held the Leverhulme Early Career Fellowship (2017-2021). She is the editor of The Politics of Race and Racialisation in the Middle East (Routledge, 2022).