Are Iran and the United Kingdom on a Collision Course? 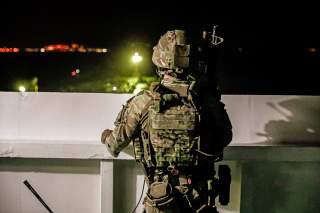 Iran appeared to retaliate for a British seizure of an Iranian oil tanker in the Straits of Gibraltar, attempting Wednesday afternoon to seize a British oil tanker in the Straits of Hormuz, according to the British Ministry of Defense. While a nearby Royal Navy frigate blocked the Iranian raid without firing a shot, the latest tit-for-tat is a dangerous escalation in the “maximum pressure” campaign against Iran.

“We are concerned by this action and continue to urge the Iranian authorities to de-escalate the situation in the region,” the spokesperson warned.

The thirty-nine-kilometer-wide Strait of Hormuz, located between Iran and Oman, accounts for about 30 percent of the world’s oil traffic.

Iran has vehemently denied Britain’s accusations. In a statement to the semi-state-run Fars News Agency, Foreign Minister Javad Zarif said that “these allegations are being proposed in order to raise tensions . . . This talk is obviously to cover up their own weak position.”

The attempted Iranian raid appears to be retaliation for a confrontation one week earlier, in which Royal Marines and local police seized an Iranian oil tanker off the coast of Gibraltar, a British territory at the entrance to the Mediterranean. British authorities claim that the Grace 1 may have been carrying Iranian oil to Syria, in violation of European Union sanctions against the Syrian government.

“I’m sure Iran was sending tankers to Syria for a long time. This is the first report that we've seen of this kind of tanker intercepted and seized,” said Sina Toossi, research associate at the National Iranian American Council. “This is an escalation. This is something new from the British and personally, I think it's most likely the British did this on behalf of the Trump administration.”

Spain’s acting foreign minister Josep Borrell backed Toossi's speculation in a statement, contradicting Britain’s insistence that the Grace 1 was seized on the initiative of local authorities.

Either way, the seizure looked like a part of the U.S. “maximum pressure” campaign to the Iranians, says Toossi. “Iran is engaged in these negotiations with Europe, trying to preserve the nuclear deal,” he told the National Interest. “So, the Iranians are viewing this British action against an Iranian tanker as adding insult to injury.”

Rouhani and his Reformist allies were re-elected thanks to the Joint Comprehensive Plan of Action, which promised Iran sanctions relief from the major world powers in exchange for submitting its nuclear program to strict nonproliferation inspections. But the Trump administration destroyed Rouhani and Zarif’s signature achievement, re-imposing economic sanctions and successfully cutting Iranian oil exports by 90 percent.

Pressure has been mounting from Iran’s opposition Conservatives, as well as the unelected Supreme Leader and Islamic Revolutionary Guards Corps, to hit back against every escalation. After the Grace 1, hardline Conservative newspapers publicly called on the government to seize British oil tankers as retaliation. Maj. Gen. Mohsen Rezaee, secretary of the unelected Expediency Council, endorsed these calls in a social-media post on Twitter on July 4.

“In its forty year history, the Islamic Revolution has never been the initiator of tension in any confrontation, but in response to bullies and their cronies, it has neither hestiated nor admitted uncertainty,” he warned. “If England does not release the Iranian oil tanker, the responsibility of the competent authorities is a reciprocal action, to detain an English oil tanker.”

Initially, the Iranian Foreign Ministry summoned the British ambassador, while Zarif took to English-language Twitter to complain that “Iran is neither a member of the EU nor subject to any European oil embargo.” He called the British seizure an act of “piracy,” but stopped short of threatening any specific retaliation.

After a Wednesday cabinet meeting, President Hassan Rouhani threatened Britain with unspecified “consequences.” The incident in the Straits of Hormuz later that day seems to indicate that Rouhani has taken Rezaee’s advice.

Citing “statements by the Iranian defense minister and Rouhani,” Toossi speculated that “if Iran did harass or try to seize the British tanker, it would have been a consensus decision approved by the highest levels,” including Rouhani, Supreme Leader Ali Khamenehi, and the National Security Council of Iran.

It appeals foolhardy to target a British ship while the Royal Navy is in the area, but Gil Barndollar, senior fellow at Defense Priorities and Military Fellow-in-Residence at the Catholic University of America's Center for the Study of Statesmanship, told the National Interest that Britain has “a very limited ability in a surface navy to provide escorts, to provide presence of force around the world.”

HMS Jufair in Bahrain, the only permanent British naval base east of the Suez Canal, can only accommodate about five hundred personnel. The burden of confronting an Iranian naval escalation would fall on the United States.

“We could do escort missions and escort tankers out like we did in the [Iran-Iraq] Tanker War,” Barndollar said, but the U.S. Navy lacks lightweight frigates, forcing it to use expensive and potentially vulnerable alternatives such as destroyers and aircraft carriers. “Could we knock out the Iranian Navy pretty quickly by air or by cruise missile? Sure. Are there nonetheless serious threats to U.S. vessels in the Gulf if the Iranians want to play that card and actually start a shooting war? A 100 percent.”

Iran’s goal is probably not to start a shooting war. Instead, they are “switching to a sort of tit-for-tat strategy,” said Toossi. “If the U.S. is trying to prevent Iranian oil exports, Iran is going to take these provocative actions in the Persian Gulf. If the British try to seize an Iranian oil tanker, Iran has ways of retaliating and raising the cost.”

“We’re at the cusp of war. It really, really goes back to this needless, reckless decision by Trump to renege on the deal and pursue this maximum pressure campaign, which is failing on all fronts, creating a more unstable situation,” Toossi warned. “This nuclear deal was in place. It was working. Iran's pathways to the nuclear bomb were eliminated. There was no instability in the Persian Gulf. No instability in Gibraltar, these tankers being taken. The crisis is restarting.”