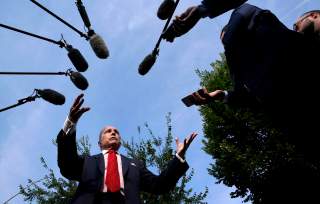 Personnel has been the story of this presidency.

A candidate who ran an unorthodox campaign based on “America First” became a president whose White House was largely staffed by conventional Republicans and national-security hawks. There was no Trumpist think tank, and hardline populists, like Stephen K. Bannon, starved of such a resource, focused on trying to win early policy fights, such as the travel ban, rather than filling out senior staffing roles. A former senior defense official who has been floated for high-level positions in the White House before, including national-security advisor, told me when he first met Jeff Sessions, who some consider the intellectual godfather of Trump’s movement, the future Attorney General asked, “Where have you been?”

A case in point in this contradiction is Larry Kudlow, the president’s economic point man.

Kudlow’s ascension to that role—but most importantly, into Donald Trump’s inner circle—is emblematic of several factors that help tell the story of this administration.

Kudlow took over the job earlier this year after Gary Cohn, the former Goldman deputy, resigned essentially in protest over the administration’s plan to go ahead with tariffs. But, paradoxically, Trump replaced Cohn with Kudlow, an evangelist for open markets. As late as March, Kudlow, along with Reagan economist Art Laffer and Steve Moore of the Heritage Foundation, with whom Kudlow has long partnered, were writing in CNBC: “Mr. President, tariffs are really tax hikes.”

On the one hand, some in the president’s orbit reject the notion that Kudlow is some sort of free-trade wolf in protectionist’s clothing. A veteran conservative activist friendly with the White House told me Friday that Kudlow is the “guy.” “Everyone who thinks he’s a globalist is just plain wrong,” this person told me. The moniker is a nod to the slur that befell Cohn: “Globalist Gary.” Breitbart News would mockingly put globes around his name when they wrote him. The populist pressure helped to thwart not only his tenure at the National Economic Council but also his bids for Fed chair and White House chief of staff.

But in contrast with Cohn, Kudlow, who has a much more robust record of free-trade proselytization, has played team ball. Cohn did himself no favors with this contingent by cavorting with Ivanka Trump and Jared Kushner, now scourges of the base. And after the Charlottesville tragedy in August of last year, Cohn criticized the president in the Financial Times. Kudlow has avoided conflict with Trump.

For the most part for this White House, tariffs are the means, not the ends. The goal “is still free trade,” Kudlow told C-SPAN earlier this month. Kudlow says that Laffer, “who has warned about the use of tariffs,” basically “thinks Trump is right to make the fight. . . . And I do too.”

For Kudlow, the goal is to use tariffs to coerce even lower barriers with most partners, not usher in an age of autarky.

The approach actually mirrors language Trump used on the campaign, which at the time was labeled by critics labeled as contradictory. “The fact that I'm negotiating trade will mean that we're going to make good trade deals,” Trump said in the spring of 2016. “But we are absolutely going to keep trading. I am not an isolationist. And they probably think I am. I'm not at all. I'm a free trader.”

“He's definitely changed his tune from his pre-administration days. Back then, several times when I appeared with him on CNBC, he would always acknowledge that China's trade and related predation were unacceptable, but would insist that unilateral tariffs represented a poor response,” Alan Tonelson, founder of the popular economics blog RealityChek, told me Friday.

Kudlow, Tonelson says, has “clearly . . . become a convert to such tariffs—at least as bargaining chips,” but “not as ends in and of themselves.” Working with the Right’s more market-oriented figures, like Kudlow, is also consonant with Trump’s recent tack: a rapprochement with many of the party’s libertarians. As I reported earlier this week, Sen. Rand Paul has vaulted into the president’s circle on foreign-policy matters, and the small government House Freedom Caucus remains the principal bastion of Trump support on the Hill. It could be a boon for restrainers. “About that ‘libertarian moment’ so many are so sure is dead,” libertarian writer Jack Hunter observed Thursday. Much of Stephen K. Bannon’s new movie, “Trump @War,” which I saw an advanced screening of this week, will focus on the Republicans as capitalist alternatives to the rising tide of democratic socialism. A return of sorts for the Tea Party?

Based on his public statements and conversations with those familiar with his thinking, Kudlow sees the Trump doctrine as threefold: a surging economy that lifts all boats, occasional coercive tariffs to force lower barriers and a harder line on China.

The Chinese question splits the restrainer foreign policy-community, generally. Some see Beijing as a principally an economic challenge. It is imperative to reframe “our ‘competition’ with China as an economic challenge, not a military one,” Edward King, president and founder of Defense Priorities, told me in May.

But for now, the Trump-Kudlow approach to the economy and China commands tenuous, but decided support among the conservative intelligentsia. Laffer lining up behind it is hugely telling. To always “take Donald Trump literally is I think a huge mistake,” Laffer told Vice earlier this week. “Now can you get me to agree a year from now, after he causes the Great Depression? Yes you can get me to be opposed to [Trump’s trade approach]. But right now, I just don’t see that in him.”