Are Russia and America Headed for a Showdown? 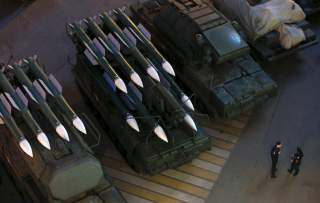 What happens when an under-staffed, under-experienced, and under-managed presidency, under siege by domestic opponents, is faced with an escalating crisis with a nuclear superpower? We could well find out soon, because powerful forces in both Russia and the United States appear to be itching for a fight.

On the U.S. side, an unlikely combination of hardline Republicans, Democrats still smarting from their election loss, and warfighters in our military and intelligence ranks all view Russia as a common foe that has not paid a high enough price for its transgressions. Many are convinced that President Trump’s hopes for better U.S.-Russian relations are at best naïve, and at worst a cynical cover for unethical if not treasonous dealings with nefarious Russian government and business figures. The combined opposition of these groups to any effort to seek even the narrowest slice of common ground with Moscow, augmented by a well-orchestrated series of Russia-related media leaks aimed at hastening the demise of the Trump presidency, is exerting enormous pressure on the President to stand aside as intelligence and military operators move to retaliate for Russian misdeeds. The recent announcement that the U.S. Congress has reached near unanimous agreement on a bill imposing new sanctions on Russia and sharply limiting the ability of the President to lift them underscores the strength of these forces.

On the Russian side, early post-electoral optimism about the new U.S. administration has given way to concern about the controversy surrounding Russian election meddling, followed by exasperation over Washington’s deepening dysfunction, and turning in recent weeks into genuine anger at continued U.S. refusal to return Russia’s diplomatic properties seized in the last days of the Obama Administration. President Putin and Foreign Minister Sergei Lavrov have so far resisted growing pressures from Russian nationalists to retaliate against perceived U.S. offenses. Putin chose not to respond in kind when the U.S. expelled thirty-five suspected Russian intelligence officers, for example, preferring to give the incoming Trump administration an opportunity for a fresh approach, and he has shown restraint in responding to U.S. attacks on Syrian military targets. Contrary to U.S. media caricatures depicting Putin’s near omnipotence within the Russian system, however, he cannot ignore pressure from his right forever, particularly if his calls for Russian restraint are ultimately met with the back of Washington’s hand.

Each side has legitimate grievances against the other, but each also suffers from serious misperceptions of the other’s intentions. Russia has misperceived U.S. support for democratization in Russia and neighboring regions as an effort to encircle and ultimately overthrow the Russian government. In Ukraine, Georgia, and other ex-Soviet republics, democratic forces have typically also been hardline nationalists with anti-Russian platforms. They turned to the U.S. not only for ideological reasons, but also because they saw us as a military and geopolitical counterweight to Moscow. Washington’s tendency to overlook anti-Russian sentiments in these states has only further convinced Moscow that U.S. support for democratic movements is a cynical effort to establish pro-U.S., anti-Russian governments along Russian borders.

In the United States, Russia’s objections to what we do have been mistaken for opposition to what we are. Our Cold War conflict with the Soviet Union was both ideological and geopolitical. Our present-day tensions with Russia are geopolitical, not ideological. There is no doubt that the Russians have come to view the United States as a malevolent force in the world, using its formidable military and economic power to punish or remove regimes it finds objectionable with little regard for Moscow’s protestations, the constraints of international law, or the instability that has followed in the wake of American interventions. But, while the Kremlin is deeply suspicious of democracies that combine close ties to Washington with hostility toward Russia, it has no principled objections to democracy as such. In dealing with democracies that are uninterested in joining the NATO alliance or pursuing hostile policies—such as India or Israel—Moscow has a long record of constructive and even friendly relations.

Under ordinary circumstances, this combination of legitimate grievances and mistaken perceptions would be manageable. But the domestic pressures in both capitals will make it difficult for either country to exercise restraint. The sparks that may ignite this dry political tinder will probably originate in the murky worlds of intelligence and cyber operations, where U.S. and Russian operators regard each other with undisguised hatred and contempt. Unless the dispute over diplomatic property is resolved quickly, Moscow will almost certainly follow through with expelling U.S. personnel from Russia and denying access to American diplomatic properties. We should not count on strict reciprocity in Russian actions, however, given the emotionally charged atmosphere. The Russians are likely to step up harassment of our diplomats, which has already resulted in numerous ugly though little publicized incidents. If—as the Washington Post has reported—the United States implants “cyber bombs” in critical Russian infrastructure that it could detonate at some future time, it is likely that Russia would implant similar cyber weapons in vulnerable U.S. infrastructure, and it is conceivable that it might not wait to activate one.

It is in Ukraine, however, where the dangers of direct confrontation between U.S. and Russian warfighters are greatest. The Minsk Accords, an effort led by France and Germany aimed at managing and resolving the Ukraine conflict, are all but dead. Fighting between Ukrainian forces and Moscow-backed ethnic Russians in eastern Ukraine is intensifying. The United States has established a military training facility—which through Russian eyes looks very much like a military base—in western Ukraine, where U.S. military personnel are stepping up their training and equipping of Ukrainian warfighters. Russia has built a chain of military bases along its border with Ukraine. Neither the Ukrainian nor Russian governments fully control the nationalist militias on both sides that feature prominently in the fighting, and pressures from the U.S. Congress to provide Ukraine with lethal aid are growing.

Preventing this impending exchange of body blows from spiraling into direct military confrontation would tax the diplomatic skills of even the most able statesman. Through Russian eyes, U.S. retaliatory actions will appear to confirm their worst suspicions about American intentions, undermining Lavrov and other proponents of more constructive U.S.-Russian relations while empowering hardline Russian nationalists. In turn, Russian countermoves will almost certainly solidify American perceptions of Russia as an enemy bent on damaging the U.S., its allies, and the international order. Even a small incident involving a cyberattack on U.S. infrastructure or an attack on U.S. military personnel in Ukraine could set off a chain reaction of events.

The situation may have to get worse before cooler heads start to prevail. Neither Americans nor Russians want to return to the worst days of the Cold War, when nuclear war was such a horrifying yet plausible possibility. Back then, staring into the abyss of the Cuban missile crisis helped to set the United States and Soviet Union on a course toward reducing the dangers of confrontation, controlling our nuclear weapons, pursuing détente and ultimately ending our bilateral rivalry. Let us hope that it does not require a similar crisis to sober us up today.