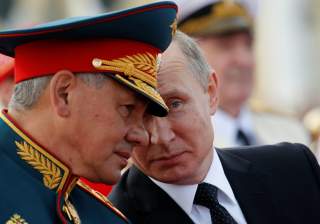 How will Moscow respond as the United States takes a series of retaliatory steps meant to punish Russia for its misdeeds in American domestic politics, Ukraine and the Middle East? Conventional wisdom in Washington holds that Russian president Vladimir Putin is a bully playing a weak hand; when faced with the realities of U.S. economic pressure, military might and cyber ingenuity, he will back down. But the signals that Moscow is sending through both words and actions paint a different picture. Understanding them will be critical if we are to avoid a dangerous escalatory spiral of action and reaction with Russia.

The Russian Foreign Ministry statement issued last Friday, carefully timed to arrive in the inboxes of Washington policymakers and intelligence-community leaders the morning after Congress sent its sanctions bill to the White House for signature, contains both explicit and implicit signals about Moscow’s menu of countermoves. Most attention has focused on the two retaliatory steps it announced: denying access to two U.S. diplomatic properties in Moscow and reducing the level of official American personnel in Russia to 455, a number that it claims is equal to the number of Russian officials in the United States. These two measures are billed as reciprocal, albeit delayed, responses to moves last December by the outgoing Obama administration to expel thirty-five suspected Russian intelligence officers and seize two Russian diplomatic properties in the United States.

Less noticed, however, have been the Foreign Ministry’s strongly implied hints at additional measures that Moscow might pursue if bilateral relations continue to deteriorate. The statement accuses the United States of using sanctions to create “unfair competitive advantages for the U.S. in the global economy” that would “blackmail many countries and international businesses” currently working with Russia—a clear indication that Moscow hopes to drive wedges between Washington and Europeans, many of whom worry the sanctions may force them to buy higher priced American alternatives to Russian gas supplies. The statement also “reserves the right to a range of reciprocal and other measures that will affect the interests of the United States,” and it lists a series of issues, including “terrorism, the proliferation of weapons of mass destruction, drug trafficking, illegal migration, [and] cybercrime” as areas that require U.S.-Russian cooperation. Left unstated is the corollary: absent Russo-American cooperation, Moscow could actively impede our goals in those areas.

What might those impediments look like? An article in the respected Russian daily newspaper Kommersant points out that—although Moscow will probably impose additional economic sanctions of its own on the United States—symmetrical sanctions would be ineffective, given the imbalances between the two economies. It avers that “asymmetrical” steps will be required and indicates that Moscow may “refuse cooperation with Washington on issues that are critically important to it.” The article specifically cites the U.S. desire for a new UN Security Council resolution pressuring North Korea, implying that Russia might wield its veto power over the draft. Underscoring this threat, Russian state television has announced that North Korea is attending this week’s joint Russian-Chinese military exercise as an observer—the first time such an invitation has been extended since the Soviet era, and a clear signal that Moscow may consider military—as well as diplomatic and economic—support for Pyongyang, not to mention for Iran and other American bêtes noires.

Beyond foreshadowing what they might do in response to U.S. retaliation, the Russians are also signaling the depth of their resolve to oppose U.S. actions that they believe threaten Russian security. Aggressive Russian naval and air maneuvers close to U.S. military forces not only allow Moscow to gauge American reactions, but also send strong signals about Russia’s willingness to risk military confrontation in defense of its vital interests. Ugly harassment of American personnel in Moscow is often viewed in the United States as nothing more than thuggery, but it also communicates warnings about perceived U.S. interference in sensitive Russian affairs. We should be on the lookout for further Russian signals as we consider potential retaliatory steps in the cyber arena and in Ukraine.

Given the charged domestic climates in Washington and Moscow, an escalatory cycle leading to U.S.-Russian confrontation is looming, but it is not inevitable. Apart from the announced steps against America’s diplomatic presence and property, Russia is leaving the door open to compromise. President Putin commented over the weekend, in an unusual nationally televised interview about Russia’s menu of retaliatory options, that he opposes further measures against Washington for now. The fact that Moscow has given the United States until September 1 to reduce its personnel in Russia—in contrast to the three-day expulsion deadline imposed on the Russian embassy by the Obama administration in December—suggests that the Russians harbor some residual hopes that President Trump will use that time to cushion the blows from Congress and avoid further inflaming the bilateral relationship.

Misinterpreting Russian signals is our most immediate danger as we consider next steps. Putin’s willingness to leave space for negotiation can be misread as weakness. Russia’s aggressive actions and support for rogue regimes can reinforce our predilection to view Moscow as an implacable enemy, bent on undermining democracy in the United States and abroad. Taken together, however, they suggest the Kremlin is attempting to strike a balance between pragmatic compromise and tough defense of its non-negotiable interests. Finding a similar balance in U.S. policy may be key to avoiding a bilateral disaster.