Are Russian Marines Preparing to Seize Odessa from Ukraine? 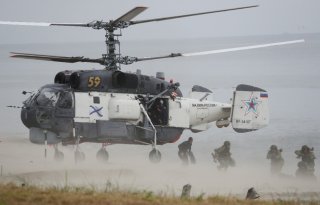 As the Russian military intensifies its buildup along the Ukrainian frontier, pronounced naval infantry activity marks a dangerous telltale indicator. Moscow has been sending in elite marine units from all over Russia, from the Pacific Fleet area of responsibility to Kaliningrad.

If a war erupts, the Russian leadership could move to conquer Odessa, cutting off Ukraine’s access to the Black Sea. Doctrinal and command ties between the airborne troops (VDV) and the naval infantry would be particularly crucial in this scenario. While the Armed Forces of Ukraine can still thwart the assault, they would need more than urban warfare weaponry to prevail.

Odessa Offers the Big Prize for the Kremlin

Ukrainian defense chief Gen. Kyrylo Budanov has already voiced fears of a Russian amphibious invasion of Ukraine’s coastline. With a fast-growing concentration of Russian naval amphibious units, this could lead to a drastic shift in the Black Sea geopolitical outlook.

Although Mariupol seems to be a likely target for a Russian landing to outflank Ukrainian defenses, the logistical challenge of navigating approximately 300 nautical miles from Sevastopol to the Sea of Azov, and passing through the shallow and narrow Strait of Kerch with large vessels under harsh winter conditions, render this course unfavorable for Moscow. Likewise, while an amphibious assault targeting the western shores of the Kherson Oblast can outmaneuver the Ukrainian formations at the Perekop Isthmus, this would offer little strategic reward for the Russians. Besides, the Kherson amphibious assault scenario limits the landing options within a fifteen-mile strip between Lazurne and Laizny Port due to hydrographic restraints in the shallow waters, thereby giving Ukrainian defense planners the ability to concentrate their forces in a relatively small area.

The Odessa option, however, would offer strategic opportunities for Russia. According to Bloomberg, about 70 percent of Ukraine’s trade is conducted by sea, and Odessa’s regional ports comprise roughly three-quarters of that. Without Odessa, Kyiv would be largely isolated from international markets. Even more importantly, with an adequate force generation effort, a Russian campaign to take Odessa could progress as far as the breakaway state of Transnistria along the Moldovan-Ukrainian frontier, resulting in a fait accompli on NATO’s doorstep. Securing Ukraine’s most lucrative port infrastructure would also give Russia an unprecedented political-economic advantage in the Black Sea region. In a partial occupation scenario extending to Odessa, the rest of Ukraine will be plagued with instability and chaos.

However, in order to accurately assess the threat, it is critical to carefully assess the Russian Naval Infantry’s combat capabilities.

Into the Russian Marines

The Russian Naval Infantry should not be confused with the U.S. Marine Corps. The former has no aviation capability, is not a separate branch, and lacks a strategic overseas deployment capacity. Organized under the navy fleets and flotilla, Russia’s naval infantry remains a coastal defense and tactical amphibious assault force.

In an offensive setting, the Russian Naval Infantry’s main role is to serve as the first echelon troops leading the assault during the initial landing waves. For large-scale campaigns, the Russian marines must operate alongside the ground formations of airborne troops (VDV).

The Russian Naval Infantry’s order of battle doctrine is centered on five brigades and two separate battalions. The 810th brigade, garrisoned in Sevastopol, Crimea, serves under the Black Sea Fleet area of responsibility. The 336th Brigade is situated in the Kaliningrad Oblast. The 155th and 40th brigades fall under the Pacific Fleet command, while the 61st brigade is a Northern Fleet unit, garrisoned in Sputnik. Finally, the two separate battalions, 414th and the 727th, form the amphibious deterrent of the Caspian Flotilla.

Alarmingly, for some time, Russia has been flexing its amphibious muscles around Ukraine. As of early February, 2022, detachments from the 810th Naval Infantry Brigade, equipped with BTR-82A infantry fighting vehicles, conducted exercises with Ropucha and Alligator-class vessels Novocherkassk and Orsk. Open-source intelligence suggests that weaponry and platforms from the 155th Brigade have been already deployed to the region. Recently, elements from the 366th brigade left Kaliningrad for the Black Sea, passing through the Turkish Straits.

A closer look into these naval infantry formations could tell us more about their warfighting capabilities. The 810th and the 366th brigades come to the forefront with their high readiness. Russian military commentary views the 810th marines’ combat roles in Ukraine and Syria as important demonstrations of their operational capabilities. In 2014, the unit was involved in blockading Ukraine’s military bases in Crimea. Since 2015, its detachments have actively taken part in the protection of the Russian contingent in the Syrian west coast. The 336th Naval Infantry Brigade looms large as the most combat-ready unit in the Kaliningrad oblast. Its personnel also participated in operations in Syria and eastern Ukraine. The unit has between sixty to eighty BTR-82 infantry fighting vehicles organized into two battalions. Notably, the 879th battalion under the 366th Naval Infantry Brigade is certified for airborne assault operations and trains alongside the Russian Airborne Troops (VDV), boosting interoperability between the two.

How Would the Russian Naval Infantry Fight for Odessa?

The naval infantry has, both doctrinally and traditionally, very close ties with the Russian Airborne Troops (VDV). The incumbent commandant of the Russian marines, Gen. Viktor Astapov, hails from the ranks of the VDV, as did his predecessor, Gen. Alexander Kolpachenko. Furthermore, the Russian Naval Infantry’s operational art is centered on multiple-echeloned offensives through which marine air assault companies eliminate an adversary’s coastal defenses so the landing units can then secure the beachhead for the main invasion force. The Naval Infantry is most effective when it is used to support large-scale force maneuvers but, if deployed alone, is limited in its operational capabilities.

Theoretically, the Russian Naval Infantry field some twelve battalion tactical groups in total. Russia’s marines have combat records in Georgia, Syria, and Ukraine. Nevertheless, in a conventional setting, their warfighting capabilities would be limited to conducting battalion-level amphibious assaults. In a joint operations context, the naval infantry would likely lead the amphibious assault in close coordination with the VDV. The 2008 Russo–Georgian War was a telling example in this respect. During this conflict, two naval infantry battalions of the Black Sea Fleet landed in Abkhazia, fighting alongside the 76th Air Assault and 7th Airborne Divisions of the VDV.

The Russian marines cannot seize large segments of Ukrainian coastal territory on their own. However, in an ideal scenario for Moscow, two naval infantry BTGs would secure a landing zone and advance to link up with the main invasion force approaching from Russia proper and Crimea. In fact, back in April 2021, airborne and naval infantry units conducted a joint drill in Crimea, possibly rehearsing the Russian General Staff’s options for operations on the Ukrainian coastline.  Some Western writings suggest that an amphibious operation to take the Odessa port could take place simultaneously with a VDV air-assault to capture the city’s airport. Then, this spearhead force could clear the way for Russian armored and motorized formations advancing westwards.

In the abovementioned scenario, the VDV presence in Crimea is of critical significance. The Russians have already established a Crimea-garrison VDV unit, the 56th Regiment. Besides, as the buildup has avalanched to put pressure on Kyiv, more Russian Airborne Troops have been sent to the peninsula, conducting exercises with heavy weaponry, including TOS-1A thermometric heavy rocket-launchers and T-72B3 main battle tanks. VDV chief Gen. Andrey Serdukyov has personally commanded the drills.

The Wildcard Scenario: The ‘Odessa Trap’

As Mike Tyson’s famously said, everyone has a plan until the first punch. While a Russian amphibious assault seems to be a strong move, things could easily go wrong.

A successful joint VDV and naval infantry assault on Odessa’s seaport and international airport would require an extremely well-organized blitz. Should the marines find themselves isolated along the landing zones, and unable to link up with supporting forces, the Ukrainian military could envelop them in a very unfavorable position. Additional factors, such as the topography of the coastline and logistical challenges, could cripple the Russian Naval Infantry’s combat performance. The danger of urban warfare is another challenge for the marines who are not specifically trained for combat in that environment.

Above all, from a doctrinal standpoint, for a joint naval infantry and VDV assault to be successful, the Russian military must ensure air superiority over the area of operations, as well as continuous support from the Black Sea Fleet. While the latter can easily be achieved, the former would require sustaining a high sortie rate and overcoming complex logistical challenges.