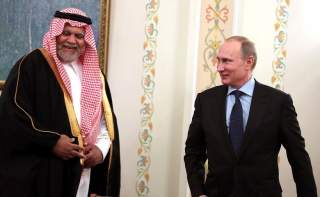 The international community first had a glimpse of the divergence between Saudi Arabia and Egypt over Syria at the Sharm el Sheikh Arab summit in March. Egyptian President Sisi allowed a letter by Putin in which he focused on Syria to be read aloud to the attendees, to which Saudi Foreign Minister Prince Saud al Faisal delivered an immediate, scathing rebuttal. It was clear from his remarks that he was holding Russia partly responsible for the violence in Syria because of its support of Assad.

Russia’s recent military involvement in Syria has been met by dismay not only by Saudi officials but also Saudis at large. The Saudi Ambassador to the UN publicly questioned Russia’s claim that it is fighting terrorism in Syria. The previously mentioned retort by the current Saudi Foreign Minister implied that Saudi Arabia would support, and possibly lead, an effort to oust Assad militarily.

However, given that the Saudi-led coalition in Yemen is yet to achieve its objective of restoring President Hadi’s government in Sanaa, it seems unlikely that the Saudis would become militarily involved in Syria in the near future. It is one thing for Saudi Arabia to fight the Houthis and their allies across the border in Yemen. It is something very different to project its military power into Syria where Russia, Iran and Hezbollah are actively supporting Assad.

Not only has Russia decided to align itself with Saudi Arabia’s biggest foes the region—Assad, Iran and Hezbollah—there are serious doubts about Russia’s true intentions in Syria. Some of its early targets suggest that it may be much more interested in assisting Assad defeat the armed opposition, including possibly some groups trained by the U.S., than in defeating ISIS. The Saudis have has also expressed concern that Russia’s direct involvement in the conflict may prove to be a boon for ISIS and other militant groups’ recruitment.

About fifty relatively prominent Saudi scholars issued a statement earlier this month, calling on Muslims to participate in the “jihad” in Syria. This is despite the fact the Saudi government has criminalized fighting in foreign wars last year. While the Saudis are trying to curb their militants from traveling to wage jihad abroad, they are equally weary of them staying home where they have already carried out suicide attacks against three mosques this year. Hundreds of militant suspects have been arrested since the beginning of the year.

President Putin met once again with Saudi Minister of Defense Mohamed Bin Salman in Sochi on October 11. Although the two countries’ foreign ministers gave statements following the meeting that suggested that Saudi Arabia and Russia understand each other’s concerns about Syria, it remains to be seen whether they are able to reach any compromise. Both have taken firm positions on the conflict and both seem committed to supporting their respective allies. Russia took a calculated risk by deciding to become directly involved militarily. Saudi Arabia will feel pressure to “do something”. What measures Saudi Arabia takes in Syria could potentially not only change the trajectory of the conflict but also reshape the political order in the Middle East.

Fahad Nazer is a Senior Political Analyst at JTG Inc.​ and a former political analyst at the Embassy of Saudi Arabia in Washington, DC. His writing has appeared in The New York Times, CNN, Foreign Policy, Yale Global Online and Al Monitor, among others.