Are Tanks as Obsolete as Battleships? 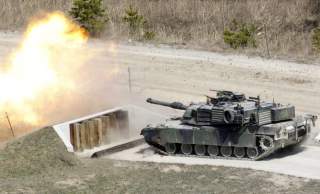 In rare instances the tanks were employed independently of other units or supporting infantry. Brincka recalled an incident in December 2016 when intelligence was received about Yazidi captives being held in the Salam Hospital near the Tigris River in East Mosul. Hoping to rescue them, a brigade of the Ninth Division punched through several kilometers of Islamic State defenses, only to discover that there were no captives. The brigade was quickly cut off, and it was only two days later that the badly mauled brigade was able to withdraw back to friendly lines. Very rarely after that was Iraqi armor used in such a manner.

As Brincka stated, “Regardless of the mission Iraqi armored units were tasked with, one of their most useful functions was to serve as a deterrent against infiltration by Islamic State VBIEDs. Barring an extremely lucky RPG shot, the main guns of tanks were the only weapon available to stop a speeding armored VBIED in its tracks. And even when VBIEDs proved successful in detonating close to Iraqi positions, the heavy armor of the tanks shielded dismounted soldiers and tank crews from the blast.”

Tanks are useful not only in the technical capabilities they provide, but in a psychological role as well. The very presence of a tank can have huge detrimental effects on enemy morale. “It’s hard to imagine something more demoralizing to troops in the open than to see a seventy-ton behemoth orientating its cannon in your direction,” notes Brincka. “The presence of tanks in a battle strike fear in even the most fanatical of enemy soldiers.”

American commanders during Operation Iraqi Freedom would probably concur with Brincka. “The tanks were almost a mystical thing to the enemy,” recalls Capt. Christopher Hanes, who led a platoon in Mosul. “When I got hit by a [car bomb] and we got into a pretty bad scrape afterwards, what ended it was when the Abrams and Bradleys showed up. When they got there the enemy just didn’t want to play,” he says.

This psychological effect is felt not only by the enemy but by friendly forces and civilians. Brincka notes that Iraqi infantrymen in Mosul were all too happy to have tanks accompany them during ground operations. “There’s something very reassuring to people about having a tank parked outside the marketplace,” says Colonel Adgie, whose battalion fought in south Baghdad. Jason Fritz, a captain from the same brigade, agrees. “When you put a tank out there on the road, the local’s perception is that now they’re not going to be attacked by the insurgents,” Fritz says.

Ultimately, it should be noted that it has been fashionable throughout military history to declare the obsolescence of certain weapons systems or military technology due to dubious presumptions about future warfare. The growing importance of firearms and specialized infantry formations in sixteenth-century Europe, claimed some historians, had made cavalry inadequate. The advent of aerial bombing during the World War I saw airpower enthusiasts declare the death of modern navies. The start of the nuclear age saw people questioning the need to maintain large standing armies.

Of course, this was clearly not the case. In almost every instance, clever military leaders were able to understand the strengths and limitations of each system, and how to make them work in tandem. Whether operating in conventional or counterinsurgency environments, very few other military units possess the combination of overwhelming firepower, survivability, mobility and versatility that tanks do. A brief survey of the employment of tanks in Iraq, from Fallujah to Mosul, proves this.

Brincka, an acquaintance of mine, can probably summarize it best: “Short of some hitherto unforeseen advancement that renders them obsolete, tanks will be one of those invaluable assets for a long time to come.”

Imran Shamsunahar works as a political risk analyst for Horizon Intelligence, a travel safety company. In his free time he is a freelance writer, writing mostly on security and geopolitics. He is currently based in Kuala Lumpur, Malaysia.