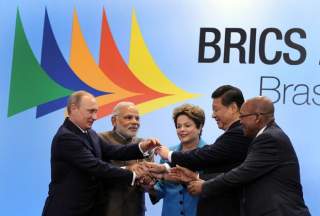 The BRICS favor a reduced international role for the U.S. dollar, a bulwark of American primacy, but the NDB will initially denominate loans in dollars, before it can move to a multi-currency basket. The internationalization of the yuan is supported by the BRICS as a means to weaken the dollar, not only in trade but also to dilute the impact of Western sanctions.  Despite their different political systems and values, the BRICS strongly share a commitment to protect their sovereignty, autonomy and freedom of action, especially from an overbearing Washington that is perceived to act first in its own interests and pass costs to others. Before the end of this year, Beijing plans to launch the China International Payments System (CIPS), China’s equivalent to SWIFT, the electronic financial-messaging system that makes possible and tracks the transfer of trillions of dollars globally. This potential new mechanism in the BRICS toolbox could increase these countries’ independence from the Western system. The long term risk for the other BRICS countries—which they fully appreciate—is that competition in financial institutions and a shift away from the Western financial architecture will not lead to greater autonomy and prosperity but instead, as a leading Indian specialist warned, to becoming trapped in a Chinese-dominated order.

Cynthia Roberts is Associate Professor of Political Science at Hunter College, CUNY and an adjunct Senior Associate at the Saltzman Institute of War and Peace Studies, Columbia University. She is currently completing a book (with L. Armijo and S. Katada) on The BRICS and Collective Financial Statecraft.