Are We Underestimating China's Military? 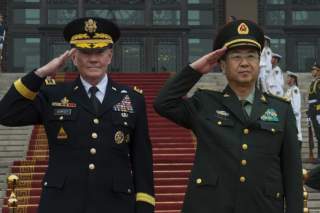 This past March, Brian Weeden, a former U.S. Air Force space analyst published a report demonstrating that China is the first country in the world with a weapon capable of destroying satellites in geostationary orbit. The report detailed how China tested in May 2013 a mobile, direct ascent anti-satellite (ASAT) weapon system capable of targeting satellites in medium earth orbit, highly elliptical orbit, or geostationary orbit. The new capability complements China’s arsenal of kinetic and non-kinetic ASATs, and signals every U.S. satellite is now vulnerable to destruction in time of war.

Mr. Weeden’s report follows on the heels of revelations in January that China had tested the WU-14 hypersonic glide vehicle, an experimental weapon capable of evading missile defenses. With the Army testing its own Advanced Hypersonic Weapon in November 2011, many observers had regarded hypersonics as an area of cutting-edge development where the United States held a significant technological lead. China’s January test shattered that assumption and conveyed the Chinese were at most a few years behind.

In Congress, Frank Kendall, the Deputy Undersecretary of Defense for Acquisition, Technology, and Logistics recently testified that “the U.S. military’s technological superiority is being ‘challenged in ways that I have not seen for decades, particularly in the Asia-Pacific region’,” by China. He further added: "Technological superiority is not assured. This is not a future problem. This is a here-now problem." China’s military developments are rapidly outpacing their coverage in the press and academia, and there is a lagging but growing realization that China’s military capabilities in numerous areas of military competition are rapidly approaching, if not exceeding, those of the United States.

Faced with the impressive scope and scale of China’s military modernization, analysts must avoid some of the mistakes assessors of the Asia-Pacific military balance have made over the past decade. While not comprehensive, the following are a few for consideration.

The first common error is to count the totality of U.S., or U.S. and Allied forces and measure them against China's, believing if the United States has more forces, then it maintains superiority. Unfortunately, the United States does not fight on a chessboard. What really matters is the localized correlation of forces, and that may be a stronger factor toward deterrence in the region.

The second error relates to how China’s doctrinal and capability innovations, such as ballistic missiles, oftentimes look very different from U.S. power-projection capabilities. But just because their missiles do not look like aircraft carriers, does not mean they cannot be as capable as or more capable than U.S. systems and their ability to project power for desired scenarios.

Third, while the U.S. has very capable allies and ones that share its values and interests in many ways, they only matter if they grant the United States access, and if they agree to fight. These are conditions the United States cannot take for granted.

Fourth, the United States should evaluate some of the Cold War biases and analytical prisms that are now mistakenly used to analyze the People’s Liberation Army (PLA). After learning in the 1990s that intelligence estimates of the Soviet Union sometimes exaggerated Soviet capabilities and capacity, the pendulum swung the other way, with China analysts consistently underestimating Chinese capabilities. During the 1990s, observers lambasted Chinese forces and predicted they would largely remain worse than they appeared. It was passé for some observers to talk of the “million man swim” well into the early 2000s, never expecting the Chinese to build a formidable navy. In the mid-2000s, criticism focused on deficiencies in technical systems, such as Anti-Air Warfare capabilities. Currently, as Chinese hardware has improved, criticism has shifted to training and joint operations. For instance, discussions of the Chinese aircraft-carrier program are dominated by the view that it will take the PLAN a long period of time to master capabilities, or at least as long as U.S. forces, seldom expecting they might gain adequate proficiency at a faster rate.

In order to avoid underestimating China’s military capability and capacity, analysts can start by recognizing the aforementioned errors, and whenever uncertain whether or not Chinese forces will grow, improve, or achieve a goal, give them the benefit of the doubt.

Timothy A. Walton is a consultant of the Alios Consulting Group, a defense and business strategy firm located in Washington, DC. He specializes in Asia-Pacific security dynamics.