Argentina’s Fork in the Road: Corruption or a Free Market? 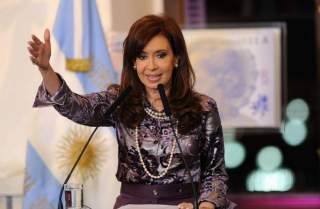 When the Argentine people go to the polls in October, they will have an opportunity to reject the protectionism and populism that are the hallmarks of current President Cristina Fernández de Kirchner’s government. There are certainly recent Latin American success stories that point towards a more hopeful path, to include the examples set by more conservative governments like those in Colombia and Mexico. There are also several countries that are both geographically and ideologically closer to home for Argentina that offer valuable lessons as well: consider the Chile of President Michelle Bachelet and former president Ricardo Lagos; the Uruguay of President Tabaré Vázquez and former president Jose “Pepe” Mujica; and, notably, Peru and the transformation launched there by former president Alan Garcia.

Regardless of which role models and regional examples are chosen, there are now two clear and divergent narratives competing for the future of Latin America. The first encompasses those nations that have embraced elements of free markets, economic diversification and integration into global commerce, reinforcing democratic institutions. The Pacific Alliance is a good example of this hopeful trajectory.

The second narrative is one of corruption, cronyism and populism, and the nations who have chosen this path have found themselves increasingly isolated from international commerce and unable to adequately care for their own citizens. Venezuela under Hugo Chavez blazed this trail, and in many ways Argentina and Brazil followed it down a dead end. Largely as a result, these countries have missed the economic and democratic revival underway throughout much of the region, and their governments are faced with growing instability resulting from gross economic mismanagement, corruption and the erosion of democratic institutions.

In the case of Argentina, “Kirchnerism”—which combines aspects of populism, nationalism and protectionism—guided the country’s development during the late 1990s and early 2000s. This ideology shaped the social and economic institutions of Argentina, leading to the nationalization of the country’s largest oil company, Yacimientos Petrolíferos Fiscales (YPF); the president’s rejection of closer economic ties with the European Union; and Argentina’s embrace of the protectionist trade bloc Mercosur. The populist economic policies implemented by the administration have also included freezing utility rates and attempting to combat inflation by doctoring official figures. As the Argentine economy has inevitably slowed, inflation and debt have continued to rise, further revealing the shortcomings of this dead-end ideology.

As Cristina Kirchner’s second term mercifully comes to an end, presidential candidates Daniel Scioli, Sergio Massa and Mauricio Macri are looking towards a different path. For Scioli and Massa, that means distancing themselves from “Kirchnerism.” Scioli has stated that he would break with populism and protectionism. Massa left Kirchner’s FPV Party last year and is running as a candidate for the Renewal Front Coalition. The only non-Peronist candidate, Macri, runs on a more pro-market platform and calls for realignment with the West.

Unfortunately, whoever wins the election will have to break the government’s habit of excessive social spending, and confront entrenched unions resistant to change. Likewise, potential vice president Carlos Zanini and many governors and legislators who share the Kirchner ideology may work against free-market reforms. Change will have to come gradually if sustainable, free-market economics are to truly take root in Argentina.

The United States can help by reaching out to Argentina’s next president, enabling him with bilateral trade agreements and resources aimed at promoting free markets, democracy and the rule of law. Efforts should also be made to more closely integrate the country into international trade and financing institutions. U.S. think tanks that nurture democratic and free-market reforms should also do their part. The next Argentinian president will need all the help we can muster in weaning the country off of the Kirchner brand of cronyism and statism.

The United States similarly offered assistance to Colombia and Panama as they implemented comprehensive economic, legal and security reforms. Greater security and stronger democratic institutions in those countries have led to increased foreign investment, making their economies more globally competitive. As noted, Argentina can also look hopefully at the example of Peru, which has similarly transitioned from a statist, socialist model to one that embraces free trade, foreign investment and closer engagement with the United States.

Ultimately, change will have to begin at home with the choice of the Argentinian people in the upcoming election. If the next president decides to break with the past and steer the country out of the dead end of Kirchnerism and Peronist socialism and towards free markets and more transparent governance, then the United States should be waiting with an outstretched hand.

Francis Rooney is a former U.S. ambassador to the Holy See, and a member of the Board of Trustees of the Center for the Study of the Presidency and Congress (CSPC); Maxmillian Angerholzer III is president of the CSPC.