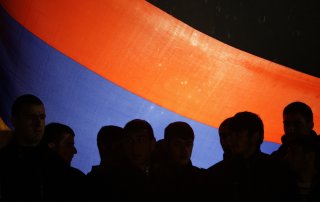 It has been four days since the full-scale war between Armenia and Azerbaijan began. Turkey’s active military-political involvement may lead to the inevitable involvement of regional and great powers in the conflict. Baku and its main ally, Turkish leader Erdogan, explain their militant attitude by the fact that the negotiation process has not led to any changes since 1994, and the OSCE Minsk Group co-chaired by the United States, Russia and France has failed its mission. Many experts are inclined to accuse Armenia of intending to preserve the status quo and not being ready to make concessions for the final settlement. By concessions, the international community means the withdrawal of troops from the seven areas around the Nagorno-Karabakh Republic. The further fate of Nagorno-Karabakh will supposedly be determined at the next stage, and this is where the major problem is.

For Armenia, these seven areas are not just a security belt, without which it will be impossible to provide strategic containment of Azerbaijan, but also the political tool to ensure peace. Lack of progress in the negotiations comes from the fact that Azerbaijan is not ready to constructively discuss the key issue—the status of Karabakh. Baku has repeatedly stressed that they are ready to grant autonomy to Nagorno-Karabakh but will never agree to recognize its independence. For the Armenian side, any status lower than the existing one is unacceptable. Thus, Yerevan cannot make unilateral concessions because they would mean total political surrender.

It is crucial to understand that Armenians would take this capitulation as a constant threat of extermination. This is far not an emotional menace that Armenians experience. They still remember the 1915–1923 genocide in the Ottoman Empire and ethnic cleansing during the collapse of the USSR. These memories could remain historical pain if the current leadership of Turkey and Azerbaijan had not repeatedly called Armenians around the world their primary enemies. President Ilham Aliyev claims that Yerevan, Armenia’s capital, historically belongs to Azerbaijanis, and one day they will restore justice. Erdogan has also consistently stated his desire to finally close the Armenian issue. Thus, there are real challenges to the survival of the Armenian nation and statehood.

Considering all the factors, Armenia is the region’s main peace supporter because it realizes the price one pays for war. After the Velvet Revolution, the country has reached progress in the state-building process, implementing democratic reforms in all spheres of social and political life. Armenia’s success was noted by Western countries, including the United States. In turn, Azerbaijan is still an authoritarian state, where all decisions are made by one political clan, and the opposition is deprived of any rights. The changes in Armenia and events in Belarus are perceived by Aliyev as a threat, and this is another reason for unleashing large-scale aggression. Azerbaijan’s president, a classic dictator, is convinced that people will stop thinking about the transition to democracy in the war heat.

So, it is weird to observe the passivity of the leading Western countries. Azerbaijan violated the key condition of the negotiations, using military force. Nevertheless, no one has issued a condemning statement or implemented sanctions. Even America, which took an obligation to restore Section 907 to the Freedom Support Act in the case of Azerbaijan’s military aggression, has remained neutral. In fact, when the leaders of the free world cease to focus on ideals and values in decisionmaking, then one can only rely on oneself. The indifference of the West will become a priceless lesson for Armenia and any other state that could regard it as a guideline for the future of its people.

Areg Galstyan is an independent expert. His articles were published in The Hill, Forbes and the National Interest.