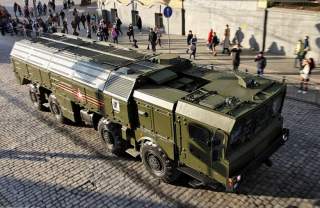 The military parade dedicated to the twenty-fifth anniversary of Armenia’s independence has put an end to three years of speculation about whether Armenia is in possession of the Russian-made advanced 9K720 Iskander Short-Range Ballistic Missile System (SRBMS). Starting with the public rehearsal on September 16, 2016, with newly procured equipment, Armenia showcased elements of the system: two transporter-erector-launchers and their transporter-loader vehicles. Subsequently, several Russian media outlets reported that Armenia had purchased at least one division, including a minimum of four launchers of the Iskander system, adding that this acquisition was outside the terms of 2015’s Armenian-Russian arms deal, which was worth $200 million. Moreover, it was officially underscored that these systems are not the same as the Iskander-M systems dispatched to Armenia in 2013 as reinforcement for Russia’s 102nd Military Base in Gyumri.

The Iskander is a mobile operative-tactical missile platform codenamed SS-26 Stone by NATO, which came to replace Soviet Scud missile prototypes. In particular, Iskander’s missiles are designed to be capable of carrying conventional or nuclear warheads, and claim to be accurate within seven meters.

Such formidable ballistic equipment has long been the focus of disputes between Western and Russian political actors and experts, especially in light of the mounting standoff between NATO and Russia.

It is believed that such a missile system enables missiles to reach their target without being detected by air-defense radar systems or missile-intercepting assets. Iskander missiles had first been deployed, temporarily, in the Kaliningrad region, to participate in military drills in relative proximity to NATO states’ borders, which reasonably triggered firm objections from the alliance. Such equipment often serves as a political instrument in Moscow’s hands, putting pressure on NATO in pursuit of derailing the alliance’s deterrent posture vis-à-vis Russia’s consistent defiance. As such, in response to NATO’s intention to boost its missile-defense capabilities by stationing the “Aegis Ashore” ballistic-missile defense shield in Romania and Poland, the Kremlin promised to deploy its Iskander-M assets in Crimea and Kaliningrad on a permanent basis by 2019.

This advanced equipment has now passed into the possession of the Armenian Armed Forces. The move is likely to invigorate a new wave of the military arms race between Yerevan and Baku, where the critical beneficiary could well be Russia. It could be argued that by dispatching Iskander missiles to Armenia, Moscow sought to achieve two central objectives. Firstly, amid growing anti-Russian sentiment in Armenian society, triggered by Moscow’s $4.5 billion military deal with Azerbaijan, Moscow has appeared to allegedly restore the power balance between the contenders. Second, while the procurement of Iskander SRBMs is set to reverse Moscow’s fading political credibility in Armenia, from Moscow’s perspective, it also paves the way for Azerbaijan and even Iran to purchase the Iskander-E missile system.

Overall, intrigue with this equipment may further complicate the politico-military image of the region as whole. Incidentally, as the parade was officially reviewed by the recently established joint Armenian-Russian land force commander, Maj. Gen. Andranik Markaryan, it conveyed the notion that the received ballistic-missile system is somehow under Russian control. It is particularly rumored that the Iskander with several S-300 surface-to-air air defense systems, combined with Russian 102nd Military Base and Armenian Fourth Army Corps, will shape the core of the joint Armenian-Russian regional army group. However, it is unlikely that the Russians would be able to keep Yerevan from utilizing its ballistic arsenal in full if its escalation with Azerbaijan reached the point of full-scale warfare.

It has been revealed that the supplied ballistic equipment belongs to an export variant of Iskander—namely Iskander-E, with a maximum engagement range of 280 kilometers instead of the classic five-hundred-kilometer Iskander-M. It definitely might have a game-changing effect in the case of a new phase of escalation.

Apart from this substantial ballistic reinforcement, the Armenian Armed Forces have already had possession of comparatively modest but operational ballistic missiles. The Armenian ballistic missile arsenal includes the short-range Soviet Tochka-U tactical operational missile complex (SS-21 Scarab B), with an operational range of 120 kilometers. Armenia owns at least eight launchers that, presumably, were supplied by Russia from 2010–12. Prior to the purchase of Iskander-E SRBMs, a major part of Armenia’s ballistic portfolio comprised the Soviet-era Elbrus tactical surface-to-surface ballistic missiles, largely known in the West as Scud-B.

Specifically, Armenia acquired eight Scud-B launchers, along with at least thirty-two missiles armed with conventional warheads from a regiment based in Armenia during the last decade of the Soviet era, which was disbanded in 1992. The missiles were completely handed over to the Armenian side in 1996; the missiles subsequently underwent a radical modernization that augmented the operational range to up to three hundred kilometers. The ballistic missile systems shape the core of the Rocket Artillery Brigade, which will be tasked with destroying the critical infrastructure of Azerbaijan in case there is an attempt to unleash wide-scale warfare. Meanwhile, Baku holds a much more humble ballistic portfolio, which features up to four 9K79 Tochka-U SRBM systems, with a range of 150 kilometers, purchased from Ukraine in 2008. Perceiving the boost of air and ballistic defense as a key state imperative, Baku managed to enhance its capacities through cooperation with and procurements from Russia and Israel. That said, the Armenian Iskander-E constitutes a substantial source of worry to Azerbaijan.

The missile demonstration shifted Armenia into a wide expert-led and political discussion concerning what kind of political and military role the new Iskander-E systems could play in the protracted standoff with Azerbaijan. Pro-government circles specifically asserted that although the Iskander serves a tactical purpose at its core, in Armenia’s hands it nevertheless has strategic implications in preventing a new phase of conflict. Likewise, being in Armenia’s service, the Iskander missiles are relevant and at some point constitute a crucial component of deterring Azerbaijan from targeting Armenian population centers in Nagorno-Karabakh, a strategy that the Azeri defense minister unambiguously announced during the fighting that broke out in April. However, this approach seems to be hardly worthwhile in the long term, as Azerbaijan, facing Armenia’s growing ballistic capabilities, is not likely to revise its strategy of brinkmanship. More recently, in a meeting with high-ranked officers, Azerbaijan’s Defense Minister Zakir Gasanov ordered them to be prepared to destroy “Armenia’s strategic military assets.” Instead, the acquisition of ballistic equipment can be easily interpreted in the context of the new strategic approach that Armenia seeks to maintain.

While Armenia’s territorial defense doctrine emphasizes defense in depth, amid the escalation of tensions with Azerbaijan in recent years, the defense ministry has reportedly amended its doctrine, adopting a so-called “Deterrence System” in February 2015. It implies a de facto preemptive deterrence approach. The new posture, despite defensive measures, suggests the strategic task of transferring the combat operations onto the adversary’s territory. Furthermore, the president, defense minister and deputy defense minister unequivocally stated in 2015–16 that Armenia henceforth asserts the preemptive right to target suspicious or worrying concentrations of Azerbaijani military units near the Line of Contact. Such a strategy requires an effective improvement of the armed forces’ mobility, as this allows the forces to redeploy quickly as the enemy advances or in the “night before” its plotted advance. In short, there are relevant prerequisites that might spur Armenia to employ the ballistic missile advantages within the framework of “preemptive deterrence.”

Azerbaijan’s bid to regulate the degree of tensions with Armenia came at the same time as the amplifying military rhetoric, the culmination of which was the violent disruption of the status quo, which had lasted twenty-three years. But above all, during the four-day hostilities, Azerbaijan widely used Israeli-made IAI Harpy 2 unmanned combat aerial vehicles (UCAVs). In light of the effective use of combat drones, the military command in Baku seems predisposed to exploit such equipment. Thus, it comes as no surprise that, on the same exact day as Armenia unveiled its new ballistic-missile capabilities, production of the Israeli-licensed UCAV Orbiter 1K was reported to be up and running in Azerbaijan.

Therefore, taking into account that the April eruption in hostilities irrevocably changed the political and military dynamics around the Nagorno-Karabakh conflict, the new era of confrontation has prompted both Armenia and Azerbaijan to revise their defense doctrines. Relying on the concept of preemptive deterrence, at some point Yerevan may realize that its ballistic-missile portfolio does not keep Azerbaijan from the temptation to use force. This standpoint is underpinned by Azerbaijan’s explicit intention to make its conflict with Armenia manageable, and hence a feasible political tool in its relations with Russia and the West. In response, in reinforcing its ballistic capabilities with Iskander missiles, Armenia may perceive the situation as its turn to dictate the political and military agenda to Azerbaijan—if, indeed, Russia will allow Yerevan to do so.

As is broadly accepted by military experts and officials, the combat drones that Azerbaijan recently embarked on manufacturing pose a tangible threat to Armenian military-strategic assets, including ballistic missiles; hence the plants producing UCAVs are seen as a source of potential menace. This is in accordance with the concept of preemptive deterrence, which in turn enables Armenia to justify defensive preemptive strikes, similar to those undertaken multiple times by Israel in the twentieth century. Therefore, against the backdrop of measures applied by Baku to embolden its military advantages with regard to its opponent, the ballistic missiles in Yerevan’s hand may easily go from being deterrence tool to being preemptive strike equipment, ultimately becoming an indispensable instrument for preventive actions. A case in point: Azerbaijan’s growing military-technical potential, seeking to challenge Armenia politically and militarily. From Armenia’s perspective, the deterrence posture by no means implies the denial of using ballistic missiles in the face of an imminent (preemptive) or potential (preventive) threat. In other words, having adopted a new defense doctrine and fostered ballistic-missile capacities, it is unlikely that Armenia should stand aside as Azerbaijan launches the production of hundreds of combat UAVs, which certainly will be used during a new round of escalation if the status quo holds over Nagorno-Karabakh.