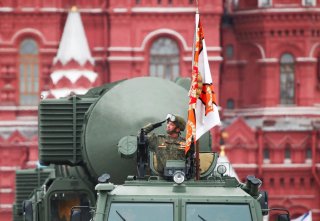 Seek to ban nuclear warheads for short-range land-based missiles. This would eliminate NSNW that pose a particular threat to countries such as the Baltic states and Poland, though it could prove hard to negotiate, as the U.S. military has no equivalent.

Continue nuclear sharing. NATO allies’ aircraft could train with U.S. strategic bombers in exercises for the use of (U.S.-based) nuclear weapons in support of the alliance. NATO allies could also maintain and exercise dual-capable aircraft for the contingency in which a crisis developed and/or the treaty broke down, even if there were no B61 bombs in Europe.

Put more boots on the ground. NATO members could bolster conventional deterrence and defense in countries such as the Baltic states and Poland by increasing the size of the multinational formations in those countries to 2,000-2,500 troops each. The United States, which leads the multinational battalion in Poland, could deploy a company to each of the units in the Baltic states.

As Washington develops its negotiating approach, it should consult closely with allies, bearing in mind that the approach could have a major impact on their security perceptions. In a crisis or conventional war, a U.S. president would either be prepared to order the use of nuclear weapons in support of allies or not; the location of the weapons would be a secondary consideration. But location matters for purposes of assurance in NATO, and consultations should weigh whether and how to assure allies other than through the physical presence of U.S. nuclear arms.

Washington has for some time sought to get all U.S. and Russian nuclear arms on the negotiating table. That is a worthwhile goal for U.S. and allied security. Persuading Moscow will be hard enough. It would be a shame if differences within NATO emerged to frustrate that objective.

Steven Pifer has just concluded a fellowship with the Robert Bosch Academy in Berlin. He is an affiliate of Stanford’s Center for International Security and Cooperation and a nonresident senior fellow with the Brookings Institution.