Art of the Peace Deal: What Can Be Done in Israel and Palestine? 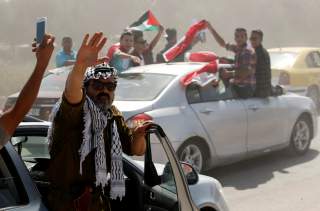 A series of circumstances currently present Israelis and Palestinians with a unique opportunity to resolve their historic conflict. The first of these was the election of President Donald Trump, who seems genuinely motivated by the challenge of succeeding where all his predecessors have failed: to bring peace to Israel-Palestine. Indeed, the president’s many naysayers, veterans of all previous failed efforts to resolve the conflict, seem to only increase Trump’s motivation to attempt the impossible. “We’re working very hard on it,” he recently said in New York, “Historically, people say it can’t happen. I say it can happen.”

Indeed, in the Palestinian-Israeli realm, President Trump already proved to be a very quick learner, not hesitating to abandon positions he expressed time and again when campaigning for the presidency. Thus, he soon urged Israel to “go a little bit slower” on additional settlement construction and he seems to have abandoned his commitment to move the U.S. Embassy in Israel from Tel Aviv to Jerusalem.

Second, Israel and a quartet of key Arab states—Egypt, Saudi Arabia, Jordan and the United Arab Emirates—now share heightened concerns about extremism and violence in the region, as well as about Iran’s increased meddling from Iraq to Yemen. The latter concerns have only increased following the nuclear agreement reached by the P5+1 and Iran, as the deal provided Tehran with additional means to finance its activities throughout the Middle East. The members of the Arab quartet are also cooperating in efforts to curb Qatar’s support of extremism, primarily through the broadcasts of Al Jazeera.

In turn, these common concerns have already also led some among the Arab quartet to become more proactive in pushing Israelis and Palestinians to accommodate. With his weight in the Islamic world as the Custodian of the Two Holy Mosques, Saudi King Salman has already engaged President Trump in detailed consultations about the best manner of bringing about a Palestinian-Israeli breakthrough. On his part, Egyptian president Abdel Fattah el-Sisi recently addressed the two parties publicly and directly, urging them to “take advantage of an opportunity that may not be repeated.” In his September speech to the UN General Assembly, Sisi called on Palestinians “to unite behind a common goal and to accept coexistence with Israel in peace and security.” He similarly called the Israeli public to “not hesitate . . . we are standing with you to make this step a success.”

Finally, with the support of Saudi Arabia and the Emirates, Egypt has launched an unprecedented effort to bring the main Palestinian factions—Hamas and Fatah—to reconcile. The purpose is clearly to place Hamas in the context of a new environment, now controlled by the Arab quartet seeking a viable Arab-Israeli peace. Should this effort succeed, its possible impact on the prospects of Palestinian-Israeli accommodation could be enormous: not only would this neutralize a ‘spoiler’ of all such past peace efforts, but equally important, Israel would be presented for the first time since the signing of the 1993 Oslo Accords, with a single Palestinian negotiations address.

What must Israelis and Palestinians do to exploit this unique opportunity to resolve their conflict while securing their core interests? For starters, Israel should declare its willingness to open permanent status negotiations with the Palestinian Authority, orchestrated by the U.S. and the Arab quartet and based on the 2002 Saudi Peace Initiative that soon became the Arab Peace Initiative (API). This should be accompanied by an Arab quartet statement to the effect that, given the dramatically changed regional circumstances, their efforts will first focus on reaching Palestinian-Israeli accommodation and that other aspects of the API—especially as it pertains to the Syrian-Israeli front—would await more favorable conditions. The statement should also make clear that once Israel would meet the requirements of a grand bargain with the Palestinians, the Arab quartet would be prepared to fulfill the promise embodied in the API to recognise and integrate Israel into the Arab and wider Muslim world.

Fon their part, the Palestinians would need to complete the recently initiated internal reconciliation process so that it produces the basis of a unitary Palestinian actor. The core of such efforts should thus be the restoration of a central Palestinian authority that enjoys a monopoly of force and does not leave Hamas with an armed militia that would perpetuate its “state within a state” status. This is necessary if the future Palestinian state is to be a state in every sense of the term and would not replicate the current disastrous Lebanon-Hezbollah nexus.

Finally, Palestinians and Israelis must both take steps to improve the environment for negotiations and refrain from any activities that would prejudge the outcome of such talks.

Will Israelis and Palestinians master the courage required to take these bold steps so that the unique opportunity they face will not be missed? Only they can decide how this page in their history will be written.