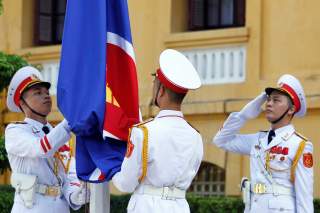 “An era can be considered over when its basic illusions have been exhausted,” observed playwright Arthur Miller. In some ways, the vision of Association of Southeast Asian Nations (ASEAN) centrality in shaping the Asia-Pacific regional order is facing a similar moment of reckoning. Without a doubt, the regional body is confronting what I call the “middle institutionalization trap,” namely the institutional structure, which allowed ASEAN to establish a robust security community in the twentieth century. It is now painfully insufficient to address the new challenges of the twenty-first century.

And this impending crisis is driven by, first and foremost, the rise of China, which is upending the regional pecking order. As the late Singaporean leader Lee Kuan Yew perspicaciously cautioned, China is so large and consequential that its re-emergence wouldn’t mean some ephemeral adjustment by neighboring countries, but an almost fundamental rearrangement in the global system.

And it’s in Southeast Asia, China’s historical backyard, where this tectonic shift is most apparent. Thus, ASEAN will either have to step up to plate and embrace institutional innovation, or fast fade into irrelevance, if not subservience to its giant northern neighbor. The best way to preserve and energize a decaying yet valuable edifice is radical reform and reexamination of its basic operating principles.

The Cult of Consensus

ASEAN, in its current composition and decisionmaking structure, is ripe for the picking by external powers, particularly China. In the past decade, the Asian powerhouse has, with mind boggling speed, transformed from an auxiliary strategic partner to a de facto veto-player within the regional body.

This is largely due to the self-defeating misinterpretation of the concept of consensus. In the case of ASEAN, consensus is falsely translated as unanimity, which, by its very nature, is almost impossible to attain whenever sensitive issues are on the table.

Operationally, what this means is that it needs only the opposition of one country to frustrate unity and advancement on any major area of concern. External powers such as China will have to only bribe, coax and cajole a single member nation—no matter how small or remote from and unaffected by as specific crisis at hand—to undermine any collective undertaking within ASEAN.

As a result, it has almost become impossible to imagine ASEAN undertaking any major decision or initiative without taking into account either China’s or its regional proxies’ views into its calculus.

As the Singaporean diplomat Barry Desker rightfully points out, the main problem is the “ability of external parties to shape the positions of ASEAN members on regional issues,” especially when “China exerts its influence on ASEAN members to prevent any decisions which could affect its preference for bilateral negotiations” rather than dealing with ASEAN multilaterally.

The upshot is an ASEAN that is paralyzed in China’s shadows, incapable of acting as an independent agent of integration in the region. For years, we have feared the prospect of discord and disunity among ASEAN nations. But more recently, the situation has become even direr.

Last year, under the chairmanship of the Philippine president Rodrigo Duterte, ASEAN effectively ceded any claim to serving as an engine of regional integration in Asia. Not only have we seen China dividing and conquering the region, but, to the astonishment of many, ASEAN served as Beijing’s shield against America and its key regional allies.

This was excruciatingly apparent on the South China Sea issue, which is threatening to tear the fabric of regional peace asunder. Arguably, the simmering disputes are the most consequential geopolitical flashpoint of the twenty-first century. As one prominent observer, Bilahari Kausikan, memorably remarked, the South China Sea is “where the parameters of U.S.-China competition and their interests are most clearly defined.” If there were to be a third World War, it will likely start here. The South China Sea is the embodiment of Graham Allison’s “Thucydides trap”.

Yet, instead of standing up to China’s unabated militarization of the disputes, the Philippines admonished attempts by external powers, including the United States, Japan and Australia, to constrain Beijing’s threat to regional maritime security. In Duterte’s blunt language, the disputes are “better left untouched.”

When Washington and its allies called on China to abide by a Manila-initiated landmark arbitration ruling—which invalidated China’s expansive claims in the area—the Philippines effectively insisted that it’s their sovereign right not to assert their sovereign rights vis-à-vis China.

Under Duterte, Manila is so committed to normalizing ties with China—ostensibly for economic incentives—that it seems it’s willing to not only echo the Chinese line on the disputes, but also fight against its formal allies. As a result, America, Australia and Japan fear that they may come off as trying to be holier than the pope if they insist on the Philippines’ rights in the area.

Without a doubt, ASEAN should be credited for facilitating the establishment of a zone of peace and prosperity in what used to be one of the most volatile regions on earth. But to be relevant, autonomous and serve as an agent of stability (rather than subservience), it has to dispense with its cult of consensus.

The regional body can revisit its decision-making structure by, for instance, more relying on the rarely, but effectively, tested “ASEAN Minus X” formula, whereby unanimity isn’t a prerequisite for action or even a robust joint statement. Even better, ASEAN could adopt the European Union’s often-used weighted qualified majority voting modality, where the population density and geopolitical heft of member states is taken into consideration.

This way, China won’t be able to veto decisions within ASEAN, so long as there are enough voices of independence and reason left in the room.

Moreover, likeminded and more independent nations within ASEAN, namely Indonesia, Vietnam and Singapore, can seize the initiative and expand ‘minilateral’ cooperation among themselves on issues of common and urgent concern. Externally, America and its allies won’t have to convince and engage all of ASEAN per se, but instead only key powers within Southeast Asia, in order to constrain China’s revanchist ambitions.

Perhaps, the best way to save ASEAN today is to precisely transcend its broken multilateralism in favor of a more dynamic minilateralism, until the regional body gets its own institutional house in order. Astonishingly, there are even discussions of Australia and New Zealand joining ASEAN in order to save the regional body from a downward spiral of irrelevance. Desperate times call for formerly unthinkable solutions.