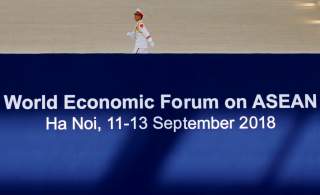 In the last few decades, ASEAN centrality and the principles of neutrality and inclusiveness have served ASEAN and the region well: it has allowed ASEAN to take the lead in building essential multilateral diplomatic architecture while member states and other countries retain a free hand in pursuing their own security relationships and interests.

This arrangement had broad support in the last decade of the previous century and the first decade of the current century because security competition between the great powers was minimized: U.S. allies and security partners were content to contribute to and exist under American preeminence; other member states supported American preeminence because it dampened security competition and allowed regional countries to focus on development; and a rising China was content to free-ride within that security system without ever genuinely committing to the rules, institutions and practices of that order.

In the contemporary environment, what worked in the past will no longer suffice. ASEAN’s preferred principles of neutrality and inclusiveness are ideally suited for an environment within which there are no major disputes between great powers (and between ASEAN states) and when major states are seeking to find common ground, compromise and maximize cooperation on strategic issues. Such principles come under strain when strategic competition between the United States and its allies, on the one hand, and China, on the other, is intensifying. Strategic competition and rivalry will inevitably deepen because of China’s willingness to change the strategic and territorial order in the region and threaten the core interests and/or territorial integrity of other states.

FOR THE moment, the United States, Japan and Australia will pay lip service to ASEAN centrality and have resisted criticizing the former’s management of South China Sea issues beyond expressing the preference that the Code of Conduct (COC) being negotiated between ASEAN and China will be consistent with international law and binding on all sides—unlikely given the initial drafts of the negotiating documents. While the United States, Japan, Australia and even India have all reaffirmed the importance of adhering to established rules and international law, ASEAN continues to have difficulty agreeing on common words with respect to the South China Sea and even mentioning the importance of international law as it applies to these disputes.

Over time, the United States, Japan and Australia are likely to become less and less sympathetic to the passive approach by ASEAN and many of its member states. Refusing to focus on points of disagreement with China will not protect Southeast Asian, American and allied interests. Declining to take a strong stand is indeed an active and consequential decision when China is pushing, challenging and changing external rules and the strategic environment. Washington and its allies will seek to refute the logic and question the effectiveness of the Southeast Asian approach and assert themselves with or without ASEAN involvement or consent.

An immediate target will be the COC process or even a concluded COC itself. Even if the COC is signed, there is little expectation it would rein in Chinese activity and no expectation that illegal Chinese gains will be reversed. As Chinese policies in the disputed areas have profound strategic and other implications for the entire region, the United States, Japan and Australia will become openly unaccepting of the perspective that disagreements in the South China Sea are primarily an ASEAN-China issue and only amenable to an ASEAN-China solution. Indeed, it is worth noting that only five of the ten ASEAN states—Vietnam, the Philippines, Malaysia, Indonesia and Brunei—are claimants.

Although ASEAN is not a unified strategic entity, it does have the capacity to raise the diplomatic heat on countries through collective approbation—something it has refused to do against China. Several member states will grow increasingly frustrated with ASEAN’s reluctance or else inability to voice greater disapproval of Chinese actions. The Philippines took its disputes to an Arbitration Tribunal convened under the United Nations Convention on the Law of the Sea only for the Rodrigo Duterte government to downplay the favorable ruling. Vietnam and Indonesia have been more vocal than peers in criticizing Chinese behavior but have been unable to persuade ASEAN colleagues to follow their lead. Unlike his predecessor Najib Razak, one hopes Malaysia under Prime Minister Mahathir Mohamad might well adopt a prickly approach toward China in defense of its own interests.

GIVEN ASEAN’S inability to come to any consensus required to take a harder line vis-à-vis China, several anxious Southeast Asian states will eventually look beyond ASEAN when it comes to increasing diplomatic pressure and costs on China—assuming they are not prepared to quietly cede control of their maritime periphery and existing claims. The United States, Japan and Australia already have established and institutionalized dialogues. It would be a relatively easy matter to include willing Southeast Asian members in an ad hoc manner and issue collective or coordinated diplomatic statements against Chinese behavior. If India decided to commit more enthusiastically to the Quad, as the other three members have done, then a Quad-led response involving other Southeast Asian players could be considered.

Bear in mind that the primary objective is not to precipitate the irrelevance of ASEAN and heighten the anxiety of relatively small and weak Southeast Asian states. But the twin arguments that ASEAN centrality ought to be uncontested and that Southeast Asian states must not be forced to choose between sides are no longer tenable. The centrality of an organization which refuses to respond when the strategic interests of its own members are being eroded in an ongoing and rapid manner cannot endure in the rough and tumble world of international politics. The usefulness of ASEAN’s diplomatic centrality with respect to achieving strategic objectives will come under scrutiny from within and without. This is not a threat to be issued to ASEAN but a reality that ought to be brought to its attention.

Moreover, Southeast Asian nations that believe there is a “no cost” approach to China are living in a fool’s paradise: Beijing has already built up enough military infrastructure with which to challenge the U.S. presence in the region and overwhelm the military forces of any other South China Sea claimants, according to the commander of Indo-Pacific Command, Admiral Philip S. Davidson. It is difficult to see how that constitutes a “no cost” or even “low cost” approach to China.

It is also worth reminding Southeast Asians that just as the grand strategy of the United States since the beginning of the previous century has been to prevent the emergence of a potentially hostile hegemon on either side of the Eurasian landmass, the grand objective of Asian maritime nations over the same period has been to prevent the emergence of another Asian hegemon in the region. Regional states might resent pressure being brought to bear against their emollient approaches, but a disengaged America is the worst of all outcomes.

This is the reason why American preeminence was always, and remains, much preferred. By Southeast Asia’s own standard, the cost of the current approach ought to be already unacceptably high. Surely merely avoiding Chinese opprobrium is not the end-game when Beijing has illegally created and is in the process of militarizing 3,200 acres of land in the South China Sea over the past five years. Regional states should also be told in explicit terms that the price of regional passivity and willingness to bend-the-knee to China is fast becoming prohibitive for the United States and its allies.

SOUTHEAST ASIAN states must choose wisely. Diplomatic messaging matters because failure to criticize Chinese actions (and support U.S. policies and actions) allows Beijing to legitimize illegal behavior, deflect criticism and broadcast the narrative of American weakness, lack of resolve and fading relevance. Beijing labels American actions such as its periodic Freedom of Navigation Operations near Chinese-held land features as “destabilizing” and “provocative” when it is China’s illegal behavior which is the revisionist challenge to international law and the status quo. China accuses the United States of “sowing discord” when the latter enhances its security networks in the region in response to Chinese assertiveness. This perverse logic is effective because it is uncontested and generally met with silence from Southeast Asia.

One priority is to address paralysis resulting from the need to secure unanimity in ASEAN’s decisionmaking by including stronger statements of its position on issues. Under the present system, China need only buy-off or else threaten one or more states to prevent ASEAN behaving more boldly to advance its members’ key interests.

Just as majority verdicts replaced the strict requirement for unanimity to prevent the prevalence of “hung juries” damaging the institution of trial by jury in many jurisdictions, it could be proposed to ASEAN that it abandon its cherished convention of decisionmaking by full consensus—perhaps to allow decisionmaking through agreement by a quorum of eight or nine states. Such a change, although momentous, is not prohibited by its charter, which is silent on this issue.

Initially, the proposal would be strongly resisted by all members. Over time, and once the seed of the idea is planted, reluctance may well subside. It should be made clear to member states that the inevitable consequence over time of continued paralysis is lessening of emphasis on ASEAN by external powers and several of its own member states. Its diplomatic centrality can only remain if the organization serves to advance the interests of its own members and that of like-minded great powers. On the other hand, if stubborn adherence to unanimous decisionmaking persists, then its members will be the unchangeable guardians overseeing that organization’s demise.