ASEAN Must Get Its Act Together on Myanmar 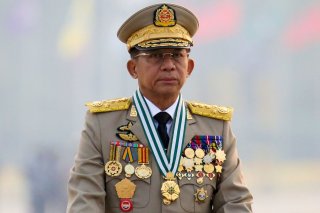 When the Armed Forces of Myanmar (or Burma, depending on where you stand) staged a coup d’état against the country’s freshly elected government in February last year, the initial response from the Association of Southeast Asian Nations (ASEAN) was muted. While the West quickly condemned the junta, most Southeast Asian nations described this as an “internal affair” and embraced a hands-off approach. This was not unexpected, given that most countries in ASEAN are not democratic—not to mention its founding member Thailand, whose current government came to power after a military coup in 2014, was eyeing yet another coup to quell antigovernment protests as recently as 2020.

But as the Tatmadaw, as the Burmese military is known, began firing on protestors, Southeast Asian leaders soon realized this wasn’t just another relatively bloodless coup as often seen in neighboring Thailand. Pressured and entrusted by the international community to play a central role in mediating the crisis, ASEAN held talks with the military in early March, urging all sides to “refrain from instigating further violence” but stopping short of condemning the deadly crackdown on protestors—true to the bloc’s tradition of low-key and non-confrontational diplomacy, which has earned ASEAN the labels of being “weak,” “ineffective,” and even “non-existent.”

In April 2021, the ASEAN leaders and Burmese army chief Min Aung Hlaing agreed to the “five-point consensus,” which demands an immediate end to violence, dialogue between all parties concerned, delivery of humanitarian aid, and regular visits of an ASEAN-appointed special envoy to meet with all parties in Myanmar.

Once hailed as a testament to ASEAN’s diplomatic sway in the region, a year and a half after its signing, the agreement was nothing but an “abject failure.” The Tatmadaw has since defied every single point of the peace plan, killing more than 2,000 civilians, detaining tens of thousands of protestors, and executing former lawmakers.

Despite this, ASEAN has fulfilled all the ‘carrots’ on its part, providing humanitarian assistance to Myanmar—which reportedly never reached those in need as the military has full control over aid disbursement—while inadvertently legitimizing the regime by sending a stonewalled envoy who was only allowed to meet those deemed “deserving” by the junta, which excluded jailed activists and leaders of the overthrown government.

The only “stick” coming so far from ASEAN has been the symbolic exclusion of the Tatmadaw chief Min Aung Hlaing from the bloc’s heads of state and government summits while still allowing the junta to attend ministerial gatherings—not even a slap on the wrist, essentially.

Meanwhile, the United States and the European Union (EU) have taken the lead by imposing sanctions on the Tatmadaw. The EU Parliament has also thrown its support behind Myanmar’s National Unity Government (NUG)—a shadow government established by the democratically-elected politicians ousted from office by the military coup—and even called on Southeast Asian leaders to include the NUG in political dialogues, which the ASEAN special envoy has so far failed to do. While the EU’s move was largely symbolic, it added another severe blow to ASEAN’s supposed central role in mediating a crisis in its backyard.

The association’s humiliation in its effort to rein in its own rogue member comes at a watershed moment for ASEAN as it becomes increasingly sidelined in the international arena. From the U.S.-led Quad and AUKUS alliances to China’s Belt and Road Initiative, great powers have increasingly relied on alternative forums and multilateral initiatives while bypassing ASEAN’s traditional channels like the ASEAN Regional Forum, undermining the bloc’s centrality in the Indo-Pacific.

This decline in ASEAN’s international prestige partially stems from growing doubts about its credibility as a regional organization. Compared to its counterparts like the EU or the Economic Community of West African States (ECOWAS), which have played an active role in maintaining peace and stability in their respective regions through politico-economic and even military interventions, ASEAN looks toothless in its dealing with the Burmese junta.

Southeast Asian leaders have begun to admit their painful failure in Myanmar, with some member states like Malaysia urging stronger actions. The ASEAN leaders’ summit earlier this month in Phnom Penh, which has no representatives from Myanmar, was a step—albeit small—in the right direction.

For starters, it had finally agreed to establish a specific timeline for the five-point plan, but this could have gone further. ASEAN should condition Burmese membership upon progress by the Tatmadaw on implementing the peace plan.

One might argue that such threats of expulsion would discourage the military from further dialogue, especially on critical issues like delivering aid amidst growing humanitarian crises in the country. However, the consistent disregard and open contempt for ASEAN by the Tatmadaw, which has been emboldened by Chinese and Russian support, shows that such talks would not amount to anything without real incentives—and punishments.

Indeed, the summit’s interesting call for “other approaches” in dealing with Myanmar could also open the door for more radical actions, including talks with Burmese opposition groups, especially the NUG. This would further damage the junta’s international legitimacy, which was already marred by its failed attempts to replace the NUG loyalist Kyaw Moe Tun as the country’s representative at the United Nations. Targeted sanctions should also be on the table if the junta doesn’t budge.

While asserting more pressure on the junta might be a deviation from the “ASEAN Way”—the bloc’s founding doctrine of non-intervention cautions against open criticism of member states and support for their opposition movements—Southeast Asian leaders must realize that the Myanmar crisis has become the ultimate litmus test for ASEAN and thus merits an exception to, if not a reconsideration of, this long-held principle.

Further accommodation towards the Tatmadaw is, at best, serving to legitimize its regime and, at worst, destructive to the bloc’s international standing. ASEAN needs to show the junta and, more importantly, the international community that “it means business,” as the Malaysian Foreign Minister recently urged.

Le Dong Hai Nguyen is the founding chair of the Global Association of Economics Education and a centennial fellow with the Master of Science in Foreign Service program at Georgetown University. The views expressed are the author’s alone.