Ashton Carter: The Pentagon Must Think Outside of Its Five-Sided Box 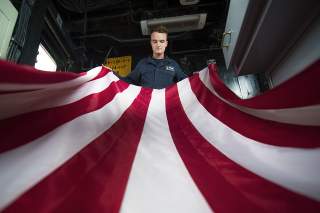 Teenager David Dworkin does not wear a uniform or earn a government paycheck, but earlier this year he made America’s military stronger and the country safer. In May, he participated in Hack the Pentagon, the first-ever bug bounty conducted by a federal department or agency. Its aim was to test for vulnerabilities in the Defense Department’s public websites by crowd-sourcing the effort to 1,400 registered white-hat hackers, with cash prizes for those who succeeded.

Within 13 minutes of the program’s start, the first bug was found. By the end of day one, 138 were discovered, including several by Dworkin. He performed the work between studies for his high school Advanced Placement exams. Incentive programs like this one are common in the private sector. Dworkin says he has found and reported vulnerabilities for Netflix and Uber, among other well-known companies, during similar bug bounties. Usually he does it for the chance for some money or a t-shirt. With Hack the Pentagon, he said he did it more out of a sense of duty and patriotism.

The pilot cost the Department of Defense a total of $150,000, no small sum, but hiring an outside firm to conduct a comparable security audit and vulnerability assessment would have cost a multiple of this amount. In addition, it freed the Defense Department’s talented in-house cyber specialists to spend more time fixing problems than finding them, and showed us how to streamline our efforts to defend our networks and quickly correct vulnerabilities. Perhaps most importantly, it underscored how solutions to even the Pentagon’s trickiest technology problems can come from anyone and anywhere among America’s tremendous human, corporate, and institutional resources.

I am exceptionally proud of the innovative culture of the U.S. military, and as Secretary of Defense, I have had the benefit of innovations begun in the past. One of my primary commitments as Secretary of Defense has been to the U.S. military’s innovations for the future, to ensure we stay ahead of a rapidly changing world, keep the edge against determined competitors, employ the latest technology, and understand the needs and tastes of new generations and attract them to serving the country. As a result, I have been pushing the Pentagon to think outside of our five-sided box, to move more nimbly in the face of a real-time world and to rekindle the pioneering spirit that has been America’s trademark for more than two centuries.

The Imperative to Innovate in a Changing and Competitive World:

Our path to the future demands such transformation. It is not sufficient for the U.S. military simply to maintain its status as the finest fighting force the world has ever known. Treading water does not win races, no matter how much effort is exerted. And while the Cold War arms race was characterized by the inexorable but steady accumulation of strength – with the leader simply having more, bigger, or better weapons – today’s era of military competition is characterized by the additional variables of speed and agility, such that leading the race now frequently depends on who can out-innovate faster than everyone else, and even change the game. In the area of investment, it is no longer just a matter of what the Defense Department buys. Now more than ever, what also matters is how we buy things, how quickly we buy things, whom we buy them from, and how rapidly and creatively we can adapt them and use them in different and innovative ways – all this to stay ahead of future threats and future enemies technologically.

The word “innovation,” at its root, means to renew, which is the essence of the Defense Department’s initiatives to continue the U.S. military’s long tradition of gaining a competitive edge over its opponents by thinking and acting in new ways, fueled in important measure by the most inventive society the world has ever known.

This innovation is all the more necessary as the United States faces a security environment dramatically different than the last generation’s, and even the generation before that.  Indeed, the U.S. military is at this moment addressing five major, unique, and rapidly evolving challenges: countering the prospect of Russian aggression and coercion, especially in Europe; managing historic change in the Asia-Pacific, the single most consequential region for America’s future; strengthening our deterrent and defense forces in the face of North Korea’s continued nuclear and missile provocations; checking Iranian aggression and malign influence in the Gulf, and protecting our friends and allies in the Middle East; and, accelerating the certain and lasting defeat of ISIL – destroying its parent tumor in Iraq and Syria, and everywhere else it metastasizes around the world, even as we help protect our homeland and our people.

The Defense Department does not have the luxury of choosing between these challenges.  And, in the face of an uncertain future, we must also continue to be ready for challenges we may not anticipate today. As the world changes and complexity increases, the Pentagon must change as well – how we invest in technology, how we fight, how we operate as an organization, and how we attract and nourish talent. The Hack the Pentagon pilot is one small example of the transformation we have already accomplished, and a preview of the Defense Department’s ambitious and highly achievable future direction.

The U.S. military’s excellence is not a birthright. It must be earned again and again in this changing and fiercely competitive world. Technology is, of course, one of the greatest agents of change. At the beginning of my own career in national security decades ago, most technology of consequence originated in America, much of it sponsored by the federal government,  particularly the Defense Department.

Today, the Pentagon is still a major sponsor, but much more technology is commercial, the technology base is increasingly global, and other countries have been racing to innovate on their own, often by using or improving the off-the-shelf products at their disposal. Indeed, we have seen in recent years that nations like Russia and China are trying to close the technology gap with the United States, and as high-end military technology has diffused, it has sometimes become available to countries like North Korea and Iran, and even non-state actors. Meanwhile, our own reliance on technological systems like satellites and the Internet has grown, creating vulnerabilities that our adversaries are eager to exploit.

To stay ahead of these threats, and maintain our lead over our competitors, the Defense Department is pushing the envelope with research and development in new technologies like data science, biotech, cyber defense, electronic warfare, robotics, undersea warfare, autonomy, artificial intelligence, and machine learning. In those areas and more, the Defense Department is making serious investments. The last budget the Pentagon proposed will invest $72 billion in research and development in the next year alone – more than double what Apple, Intel, and Google spent last year on R&D combined.

To ensure the Defense Department keeps leading on technological change, one of my core goals as Secretary has been to build, and in some cases rebuild, the bridges between the Pentagon and America’s technology community.  We have a long partnership together of course leading to the creation of the Internet and GPS, and before that, satellite communication and the jet engine. But today, the challenges and opportunities our country faces demand that we strengthen this enduring partnership in mutually beneficial ways.

While over the decades our ties have endured through successes and strains, I discovered early in my tenure that I was the first defense secretary to visit Silicon Valley in almost 20 years. Since then, our department has redoubled our efforts to forge new connections with America’s many unrivaled hubs of innovation – not only in Silicon Valley, but also in places like Seattle, Boston, Austin, and many places in between.

Maintaining these partnerships and forging new ones will require sustained effort and openness on the part of the Defense Department. Since the department and the technology community each have different missions and somewhat different perspectives, we may disagree from time to time. But that cannot stop us. In fact, we should not only expect and tolerate disagreement, but welcome it, because it is vigorous debate and exchange that produces breakthrough ideas and real transformation.

Last year, I created our Defense Innovation Unit-Experimental, or DIUx – to help build bridges with startups and other commercial technology firms located in the country’s innovation ecosystems. So far, the Defense Department has opened offices in Silicon Valley and Boston, and an outpost in Austin, Texas, to help us more quickly adopt technologies that can aid our troops in accomplishing their missions. There are more to come in America’s many other innovation hubs.  DIUx has already conducted events in 9 states and interacted with companies in 31 states. And it has also solicited proposals for funding in such categories as micro-satellites and advanced analytics – leveraging the revolution in commercial space and machine learning to transform how the United States uses space-based tools, and advanced data processing, to provide critical situational awareness to forces around the world and add resilience to our national space architecture.